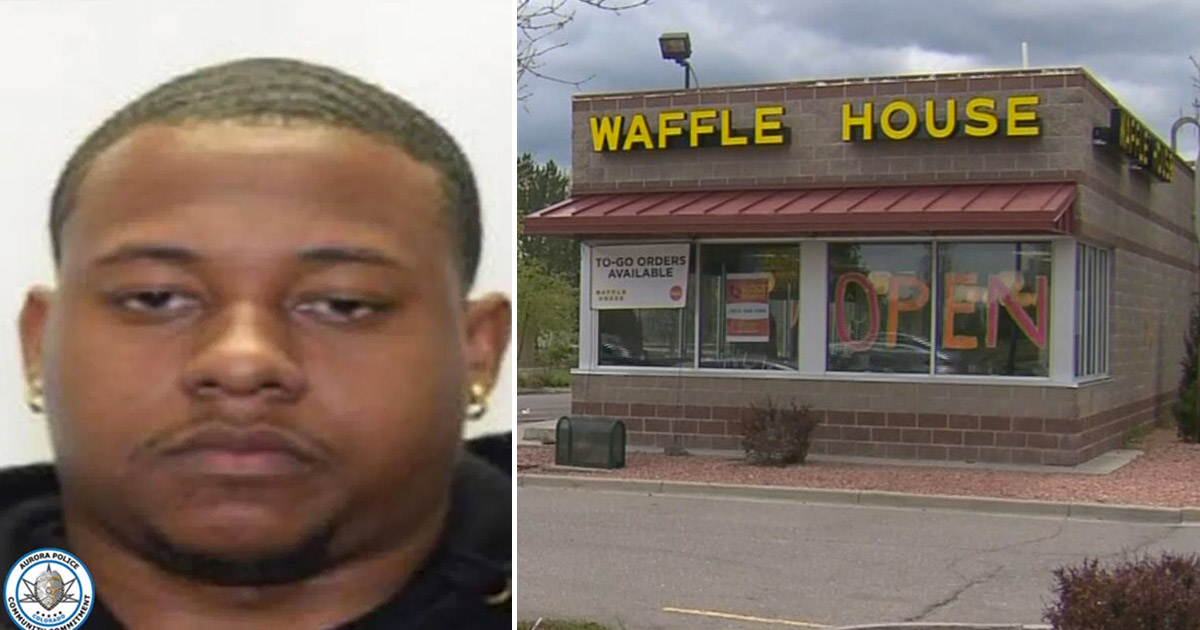 A Colorado man is facing an attempted murder charge after he allegedly shot a Waffle House employee in Aurora after they asked him to wear a face mask while inside the restaurant.

27-year-old Kelvin Watson was arrested Monday morning (May 18) by the Aurora Police Department and charged with attempted first-degree murder in connection with the May 14th shooting, the Sentinel Colorado reported.

Witnesses told police that Watson and another man came to the restaurant shortly after midnight last Thursday and neither of them were wearing masks.

Waffle House line cook Brian Gruhler, 25, denied the men service, telling them they had to wear masks before he could take their food order, so the men left and returned to the restaurant with masks … but they were holding them and not wearing them as required per restaurant policy during the COVID-19 pandemic.

Gruhler told police after he told the man, once again, that he would not be served unless he was wearing a mask,  an argument ensued and Watson proceeded to threaten him from across the counter, screaming: “You better shut the f**k up before I pull a gun and blow your brains out … I’ll come back there and shut you the f**k up! Make my food!”

A waitress said she saw Watson pull out a gun, place it on the counter and tell the cook “I could blow your brains out right now,” though police said they weren’t able to corroborate that claim when watching surveillance video.

Investigators say Watson returned to the restaurant alone the next night—this time wearing a mask—but because of his shenanigans from the day before, Gruhler still refused to serve him. Watson then berated the cook once again before hitting him in the face.

Gruhler then retreated to the back of the restaurant and exited through a backdoor. The cook told police Watson accosted him again in the parking lot and shouted at him: “You better shut the f**k up and serve me.”

Gruhler said the man then shot him once in the chest. The cook then ran to his nearby home and called 911, leaving a trail of blood through an adjacent Dollar Store parking lot, police later confirmed.

The cook was taken to the hospital and fortunately survived the shooting. He was released Friday afternoon (May 15), a Waffle House spokesman said.

Police were able to link Watson to the shooting after obtaining a receipt with his name on it for a transaction at the restaurant the same time he was there.

During the investigation, police also found a single, .380-caliber shell casing in the area where Gruhler was shot.

Investigators also obtained vehicle records of a BMW that was in the parking lot at the time of the shooting. The same vehicle was determined to be linked with another shooting at a Denver tow yard on April 23rd.

A number of Waffle House workers were also able to identify Watson from photo lineups, including one waitress who picked up a gold earring that fell out of his pocket the first time he acted the fool at the restaurant. She said the earring matched the one he was wearing in an old mugshot.

Several employees also told investigators that Watson is a regular customer at the restaurant, which police later confirmed through vehicle tracking records.

Watson is being held on a $100,000 bond at the Arapahoe County Jail and is scheduled to appear in court on Friday (May 22).

“This case involves a senseless act of violence that should not be tolerated in any community. We are very thankful that neither of our associates who were working when the incident occurred, suffered any life-threatening injuries,” Waffle House spokesperson Njeri Boss said in a statement.

“Our thoughts and well wishes remain with our associate who was injured and now is recovering at home.”

While masks are required in public areas of some communities across the Denver metro area, there is currently no mandate for the City of Aurora, however, the Tri-County Health Dept. strongly advises people to do so.