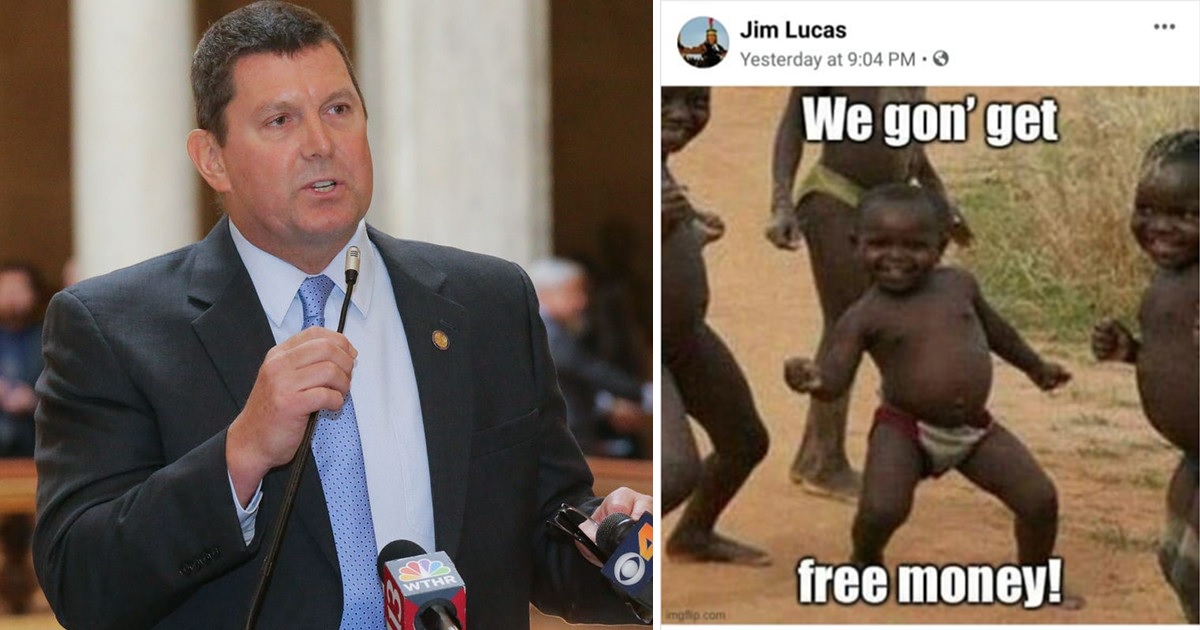 A Republican Indiana representative is facing backlash and calls to resign after posting a racist meme of black children cheering for free money from the government.

Indiana state Rep. Jim Lucas is defending a meme he recently posted on Facebook featuring a stock photo of dancing black kids with the caption “We gon’ get free money!”

Despite being called racist and a push from politicians and constituents to resign or be removed, Lucas told the IndyStar that he “doesn’t see color” and he sees nothing wrong with what he posted.

Lucas said he doesn’t see color and doesn’t believe his post was racist. He’s said he created the meme Monday night to protest federal bailouts that have created more debt for future generations.

He happened to find a picture of black kids dancing in the meme generator, he said, but could have just as easily chosen a photo with white kids.

A statement adding credence that people who want to be racist will find a way to continuously be racist.

“It makes me want to cry…and it’s sickening,” she told IndyStar.

“He should know how that hearkens back to blackface .. that kind of heralding of mocking one’s race,” Lake continued.

“I’m sorry I don’t think it’s a mistake. I think he knew exactly what he was doing and I hope people express their outrage on his page.”

On Tuesday, Lucas continued to defend the post by keeping the caption but changing the photo to photos of toothless white kids, and another image of him wearing a cowboy hat.

“THIS is the kind of garbage that divides us,” he wrote on Facebook referencing the backlash.

“I don’t see nor look at the color of a person’s skin and I find it repugnant of those that do. I apologize for nothing and the meme stays.”

Probably unsurprisingly, Rep. Lucas has a history of sharing racist and problematic posts on social media.

Lucas faced backlash last year when he posted a photo of a noose attached to story about a black man pleading guilty of rape.

On the issue of rape, he was accused of victim-blaming after writing on Facebook that women could defend themselves against rape if they just carried guns.

He also posted images of women being pepper-sprayed by police at the 2017 Women’s March with the caption “Participation trophies, now in liquid form.”

And he posted a meme of a woman and a dog being locked in a car trunk by a man in order to prove which is happier to see the man once he lets them out. The meme was denounced by domestic violence groups.

Lucas said all of these problematic posts were blown out proportion.