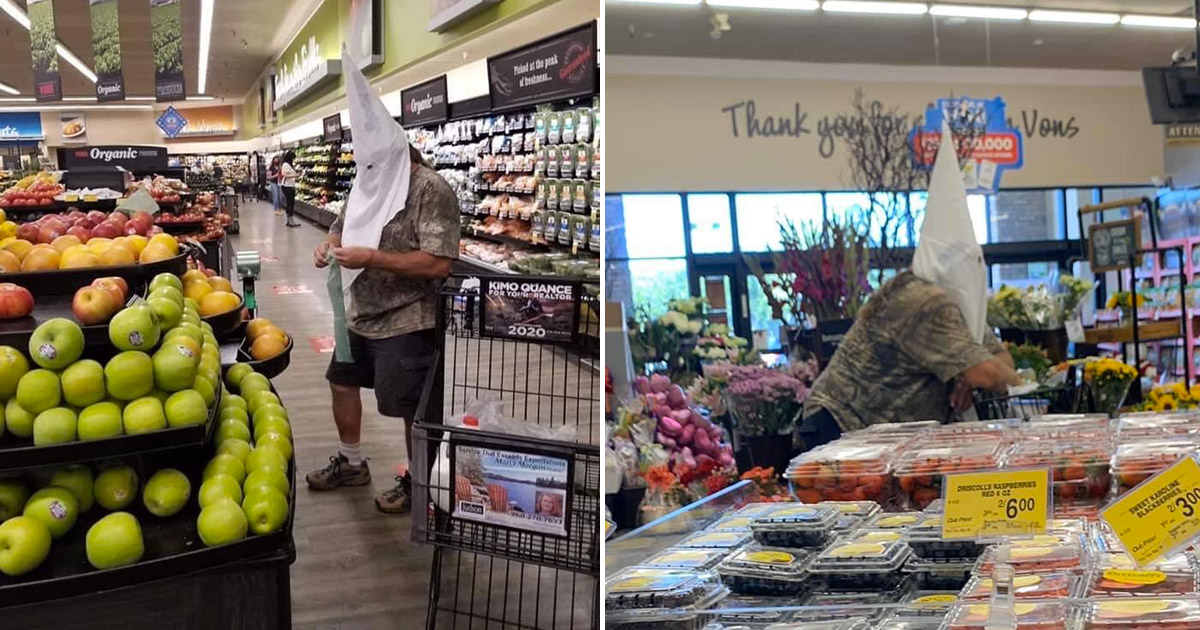 Just when you thought things in 2020 couldn’t get any worse … a man wearing a Klu Klux Klan hood was spotted shopping at a grocery store in San Diego.

Several photos of the man emerged on social media showing him with the KKK mask on walking around the store and casually adding items to his shopping cart at the Vons store on Mission Gorge Road in Santee, California near San Diego on Saturday (May 2).

“The area’s been a hub of white supremacist and skinhead activity for many years, earning the nickname Klantee,” Nico Pitney of NowThisNews tweeted Saturday.

A KKK hood worn openly at a Vons in Santee, CA, near San Diego.

The area’s been a hub of white supremacist and skinhead activity for many years, earning the nickname Klantee. pic.twitter.com/uB5ai0wETB

While many on social media are calling out Vons for allowing the man to be there and openly display and represent racism, hatred, and white supremacy, the store claims they eventually made the man remove his mask in the store.

Tammy Giles, regional director of the Anti-Defamation League of San Diego, tweeted about her anger over the Vons in Santee not doing anything about the masked racist.

“Don’t know which angers me more—the person wearing this or the fact that no one in management at Vons Santee did anything about it,” Giles wrote. “I would be happy to educate your team. San Diego is #NoPlaceForHate.”

Don’t know which angers me more – the person wearing this or the fact that no one in management @Vons Santee did anything about it. ?@ADL_SD? would be happy to educate your team. San Diego is #NoPlaceForHate pic.twitter.com/jMOzQqpcoi

Photos from one Twitter user show that management at the store “eventually” made the man remove his mask and allowed him to continue to shop in the store.

#KlanteeMan seen in Santee, CA supermarket (Von's; 9643 Mission Gorge Rd.) wearing a KKK hood. Security merely asked him to remove it; no further actions were taken.
Imagine being there, as a P.O.C., and suffering the apathy. @ACLU @TheRevAl @NAACP @Vons pic.twitter.com/wUMk8zL0fT

One shopper at the store spoke to news reporters about how the whole encounter left her in shock.

“I was in disbelief. He was behind me in line. Standing quietly,” Melissa S. told the Times of San Diego. “A man in a wheelchair went past and saluted him and he laughed. I took the photo because I couldn’t believe what I was witnessing. I’ve grown up in Santee and have never seen such racism right before my eyes.”

Vons also released a statement about the incident that took place:

“At Vons, fostering an environment of courtesy, dignity and respect is one of our highest priorities, and we work hard to hold everyone in our stores to these standards, including customers.

“Unfortunately, an alarming and isolated incident occurred at our Vons store in Santee, where a customer chose an inflammatory method of wearing a face covering. Needless to say, it was shocking.

“Several members of our team asked the customer to remove it, and all requests were ignored until the customer was in the checkout area.

“This was a disturbing incident for our associates and customers, and we are reviewing with our team how to best handle such inappropriate situations in the future.”