GOSSIPONTHIS.COM News Tennessee Man Has Nearly 18,000 Bottles of Hand Sanitizer and Nowhere to... 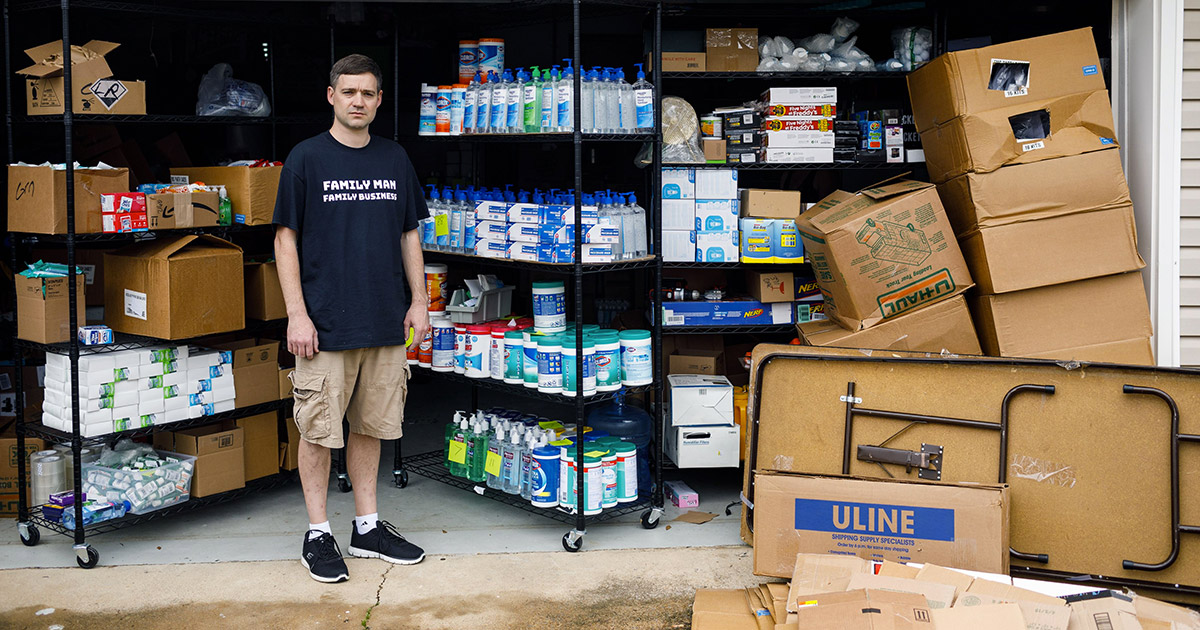 After the first coronavirus death was reported in the United States on March 1st, brothers Matt and Noah Colvin said they drove around Tennessee and Kentucky and bought up all of the hand sanitizer and antibacterial wipes they could find with the sole intent of reselling them at a profit as the public started to panic over the COVID-19 coronavirus.

The brothers cleaned out a number small shops and dollar stores, as well as Walmart, Staples and Home Depot in Chattanooga before Noah took a solo trip to Kentucky, where he filled a U-Haul truck with the aforementioned supplies, mostly from “little hole-in-the-wall dollar stores in the backwoods,” his brother said. “The major metro areas were cleaned out.”

Matt stayed home in Tennessee, where he prepared for pallets of even more wipes and sanitizer he’d ordered, and started listing the products on Amazon at a “substantial” markup. He posted

“It was crazy money,” Matt Colvin told the New York Times, revealing that he posted 300 bottles of hand sanitizer and sold them for between $8 and $70 each, multiples higher than what he’d paid for them. He also sold 2,000 50-packs of face masks on eBay for $40 to $50, sometimes more.

Within 24 hours, Amazon pulled his items and thousands of others listings for hand sanitizers, face masks and wipes in an effort to combat price gouging, the Times noted, adding that the company also suspended some of the sellers behind the listings and warned many others that if they continued running up prices, they would risk permanently losing their accounts.

eBay followed suit soon after with even stricter measures, going as far as banning all U.S. sales of face masks and hand sanitizer on its platform.

So now the Colvin brothers have 17,700 bottles of hand sanitizer sitting in a garage with nowhere to sell them, even as millions of Americans search in vain for such products to protect themselves from the spread of the Coronavirus.

“It’s been a huge amount of whiplash,” Colvin said. “From being in a situation where what I’ve got coming and going could potentially put my family in a really good place financially to ‘What the heck am I going to do with all of this?'”

Colvin told the Times he’ll likely sell what’s left of his stockpile locally, but he doesn’t want to become infamous for hoarding.

“If I can make a slight profit, that’s fine,” he said. “But I’m not looking to be in a situation where I make the front page of the news for being that guy who hoarded 20,000 bottles of sanitizer that I’m selling for 20 times what they cost me.”

Colvin defended his actions, saying he was simply pointing out and fixing “inefficiencies in the marketplace.”

He basically said he felt like he was doing the right thing because hoarding hand sanitizer, wipes and masks for profit allowed him to send them to areas of the country where it’s harder to get them … obviously without considering the fact that people like him are the reason why it’s hard for people to get those products.

“There’s a crushing, overwhelming demand in certain cities right now,” he explained. “The Dollar General in the middle of nowhere outside of Lexington, Kentucky doesn’t have that.”

Now people on Twitter are calling the Colvin brothers out for preying on vulnerable people for profit amid an outbreak that has so far sickened more than 3,000 Americans as of Sunday (Mar. 15) and killed 62 and counting. For now, Virginia remains the only state without any confirmed cases.

“Amazon” and “eBay” were trending this weekend as people praised the company for cracking down profiteering. Others complained that the platforms haven’t done the same to fight price gouging for medical supplies like insulin and EpiPen injections.

This f*cking asshole drove around small towns and bought up all their hand sanitizers and now he can’t sell them because Amazon and EBay said no. That’s EXACTLY what he (and others like him) gets. https://t.co/FeS5yKztHD

Here’s an idea. Give it to an homeless shelter or to a hospital or to a senior citizen home that needs it more. You are a selfish because you wanted a quick buck. You learn that the hard way. Thanks Amazon and EBay. https://t.co/wgXw4700Hy

This jackass went and bought up all the hand sanitizer, wanting to profit off of supply mayhem that he helped to create.

Let this be a lesson: DON'T BE AN ASSHOLE. Leave some sanitizer for the rest of us. https://t.co/45bPHe0sYK

An interesting side-effect of our weird capitalism is that Amazon and eBay can swiftly crack down on hand sanitizer price gouging but we are told there's nothing to be done about $500/month insulin or $700 epi-pens. https://t.co/cibzQArNPF

If you all are getting pissed about hand sanitizer profiteering on Amazon and eBay, wait until you hear about Insulin and Water.

Of course, the Colvins aren’t the only people who saw the coronavirus outbreak as a potential business opportunity.

A trucker from Ohio named Eric, who didn’t provide his last name, told the Times he stocked up on about 10,000 face masks from retail stores. He said he paid about $20 for each 10-pack and sold most of them for $80 and some for $125.

“Even at $125 a box, they were selling almost instantly,” he said. “It was mind-blowing as far as what you could charge.” He estimated that he made around $40,000 in profit.

A Vancouver couple told the Toronto Star that they’ve made more than $100,000 reselling Lysol wipes.

Chris Anderson, an Amazon seller in central Pennsylvania, says he’s sitting on 500 packs of antibacterial wipes after Amazon blocked him for selling them for $19 each. He said he bought the packs for $3 apiece.

These people are among thousands of sellers who have amassed huge stockpiles of sanitizing products, and people like Mikaela Kozlowski, a nurse in Dudley, Massachusetts, are pissed.

Kozlowski told the NY Times she’s been looking for hand sanitizer since before she gave birth to her first child, Nora, on March 5th.

While she was searching stores, which were all sold out, she said she skipped getting gas to avoid handling the pump. And when she looked on Amazon, she couldn’t find it for less than $50.

Sites like Amazon and eBay have popularized an industry in which independent resellers grab heavily discounted or hard-to-find items in stores to post online and sell around the world.

“You’re being selfish, hoarding resources for your own personal gain,” Kozlowski said of the sellers.