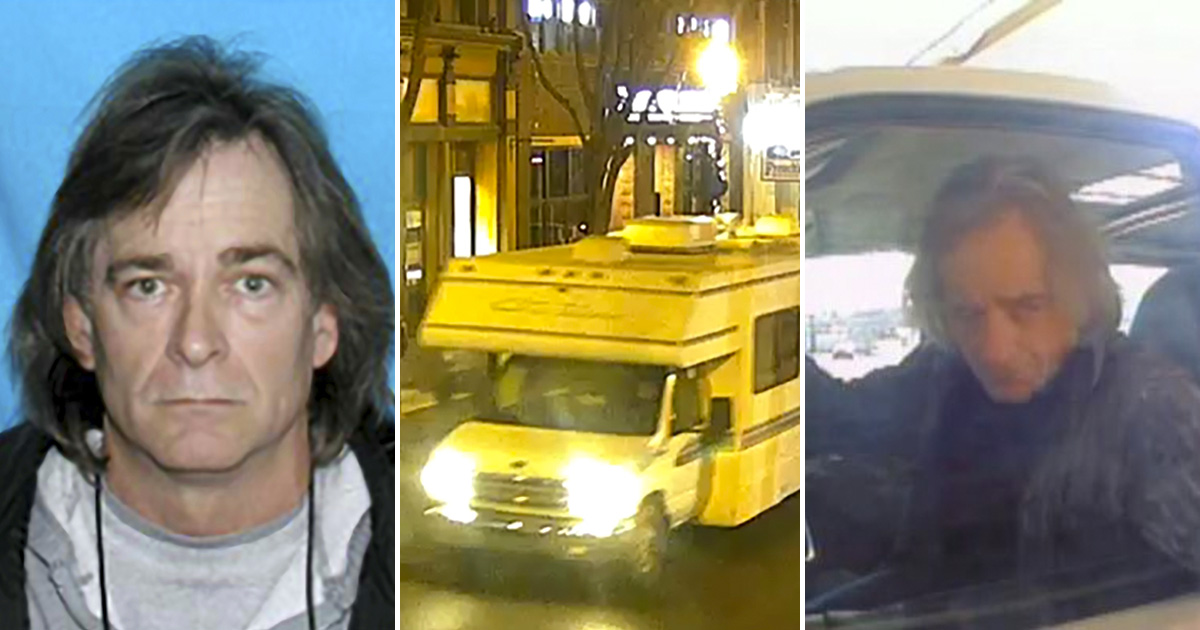 Authorities have identified 63-year-old Anthony Quinn Warner as being responsible for the Christmas Day bombing that took place in downtown Nashville, and the FBI has released a new photo of the suspect. 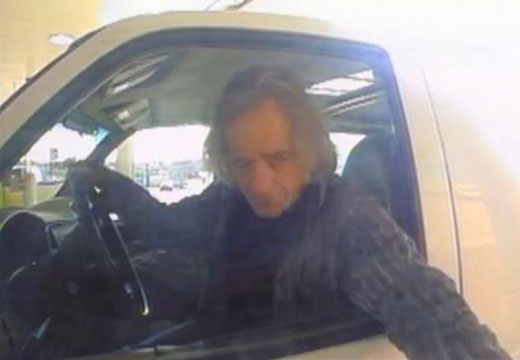 The bombing injured at least 8 people and caused damage to 41 buildings and major communication systems, including 911 centers and an AT&T Transmission Center.

Less than a week before the Christmas morning bombing, Warner made a disturbing remark to a neighbor, telling the man the world was “never going to forget” him, it was revealed Monday (Dec. 28).

Here are some things to know about Anthony Q. Warner and the bombing that took place: 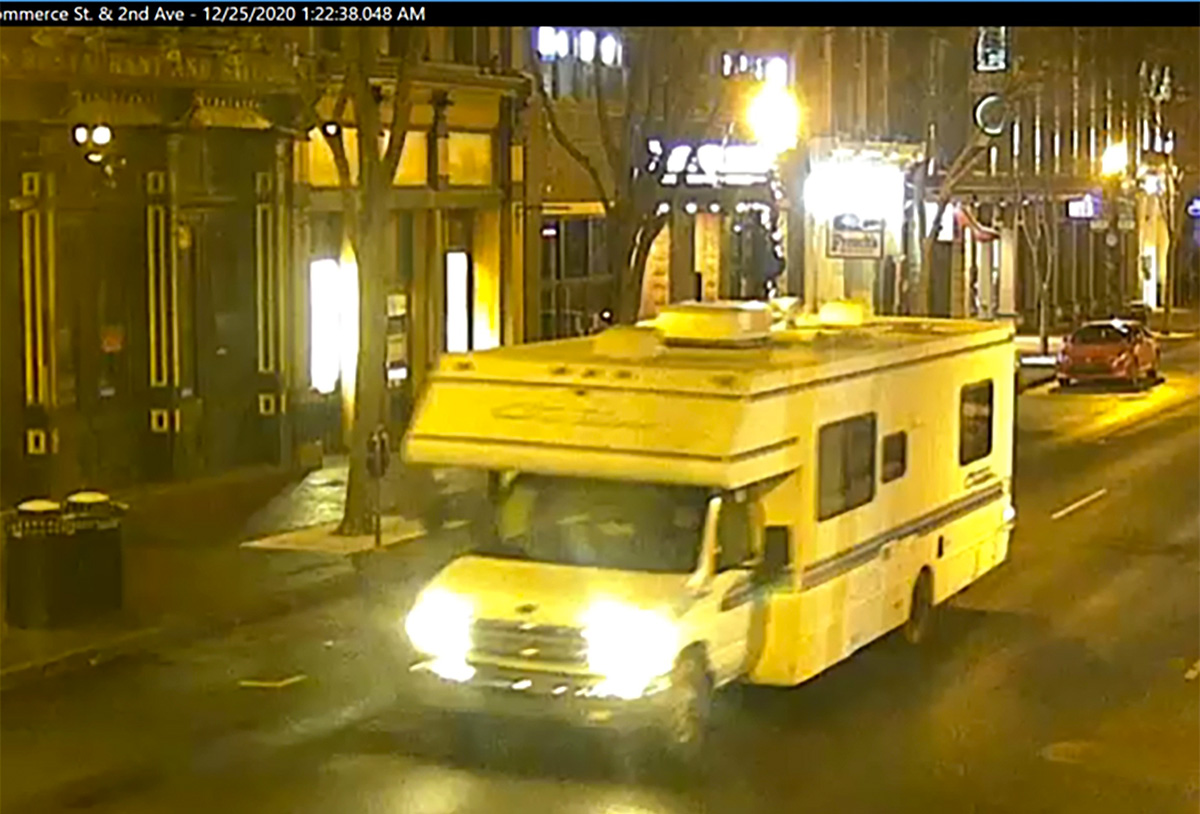 Residents told police that prior to the bombing they heard sounds of gunshots.

Officers arrived at the scene of 2nd Avenue Prior around 5:30 a.m. and found a white RV playing a recorded announcement stating that it would explode in 15 minutes before it switched to playing Petula Clark’s 1964 hit “Downtown”—a song that talks about being lonely and going downtown when feeling the blues.

“When you’re alone and life is making you lonely / You can always go downtown.

“When you’ve got worries, all the noise and the hurry
Seems to help, I know, downtown…”

Officers rushed to the homes of nearby residents and were able to get them to evacuate before the explosion. The RV exploded approximately at 6:30 a.m., CNN reported.

Anthony Warner was inside the RV and died in the explosion.

“He was present when the bomb went off and he perished in the bombing,” said Don Cochran, U.S. Attorney for the Middle District of Tennessee.

Six cops are being hailed as heroes after getting neighbors and residents out of harm’s way and potentially save the lives of many.

In addition to tips from the public, Tennessee Highway Patrol discovered a vehicle part from the RV with a Vehicle Identification Number (VIN) linking it to Warner.

SWAT cleaned through Anthony Q. Warner’s duplex home in Antioch and searched for explosives and evidence connecting him to the crime.

Google street view also showed the same RV in the bombing to be the same vehicle in Warner’s yard parked behind a wooden fence in March and May of 2019.

An RV does not appear to be at the residence as FBI agents search the home: pic.twitter.com/C9qrgl9b20

Authorities used DNA to confirm Warner was killed in the explosion.

The Tennessee Bureau of Investigation said Monday they were still working on identifying a motive and Warner’s mother is cooperating with the investigation.

Anthony Q. Warner worked as an IT specialist and quit his job earlier this month.

According to KIRO7, Anthony Warner worked several information technology jobs over the years and owned a burglar alarm business from 1993 to 1998.

His most recent job was as an independent computer technician with the real estate firm Fridrich & Clark in Nashville.

Following the bombing, the president of Fridrich & Clark Realty, Steve Fridrich, told police that Warner worked occasionally for the company as a contractor and was not considered an employee.

Fridrich also told police that Warner sent the company an email on December 5th stating that he was retiring.

“He’s a nice guy, and this seems uncharacteristic of the Tony we know,” Fridrich told the New York Times via text message. “He was very professional and knew his stuff.”

Anthony Warner was said to be quiet and a recluse who loved his dogs.

Anthony Warner’s neighbors told authorities that he rarely left his home and kept to himself.

They said Warner spent most of his time working in the yard and would engage in small talk with them from time to time, however they would never see anyone coming or leaving his home.

“You never saw anyone come and go. Never saw him go anywhere,” Warner’s neighbor of 10 years Steve Schmoldt told police. “As far as we knew, he was kind of a computer geek that worked at home.”

Another neighbor who lived near Warner for years told police that he saw Warner getting his mail last week and waved at him, but Warner did not return the gesture.

Warner was also said by neighbors to have dogs that he took really good care of, even building a wheelchair ramp for them when they got older.

Warner also wasn’t the type to get into trouble. He only had one run-in with the law which was way back in 1978.  Warner was a young adult then and was charged with felony drug possession. He served two years of probation.

Days before the bombing, Warner told a neighbor the world was “never going to forget” him.

Rick Laude, another neighbor of Anthony Warner’s, said he saw the man near his mailbox last Monday (Dec. 21), and he pulled his car over to chat with Warner and ask how his elderly mother was doing.

According to the Associated Press, Laude said he casually asked Warner: “Is Santa going to bring you anything good for Christmas?” Laude said Warner smiled and then replied: “Oh, yeah, Nashville and the world is never going to forget me.”

Laude, a 57-year-old commercial truck driver, said he didn’t think too much of Warner’s statement at first, thinking that Warner only meant that “something good” was going to happen for him.

Laude said he was “speechless” once he found out that authorities had identified Warner as the suspected bomber.

“Nothing about this guy raised any red flags,” Laude said. “He was just quiet.”

Warner gave expensive gifts to people he knew prior to the bombing.

According to The Daily Mail, Anthony Warner transferred ownership of his $160,000 home to a 25-year-old woman who lives in Los Angeles named Michelle Swing at the end of November.

Warner also wrote a letter to  Swing explaining that the basement in the home needed some work.

“The attic has plywood and lighting, take a look. The basement is not normal, take a look. Woof woof Julio,” Warner wrote in the letter.

Swing told authorities that she never met Warner in person, but did speak to him over the phone the week before Thanksgiving.

She also sent authorities the letter that Warner wrote to her. Authorities believe that Warner once had a relationship with Swing’s mother, which may explain why he gifted her the home.

Warner is also said to have told an ex-girlfriend he had cancer and gave her his car.