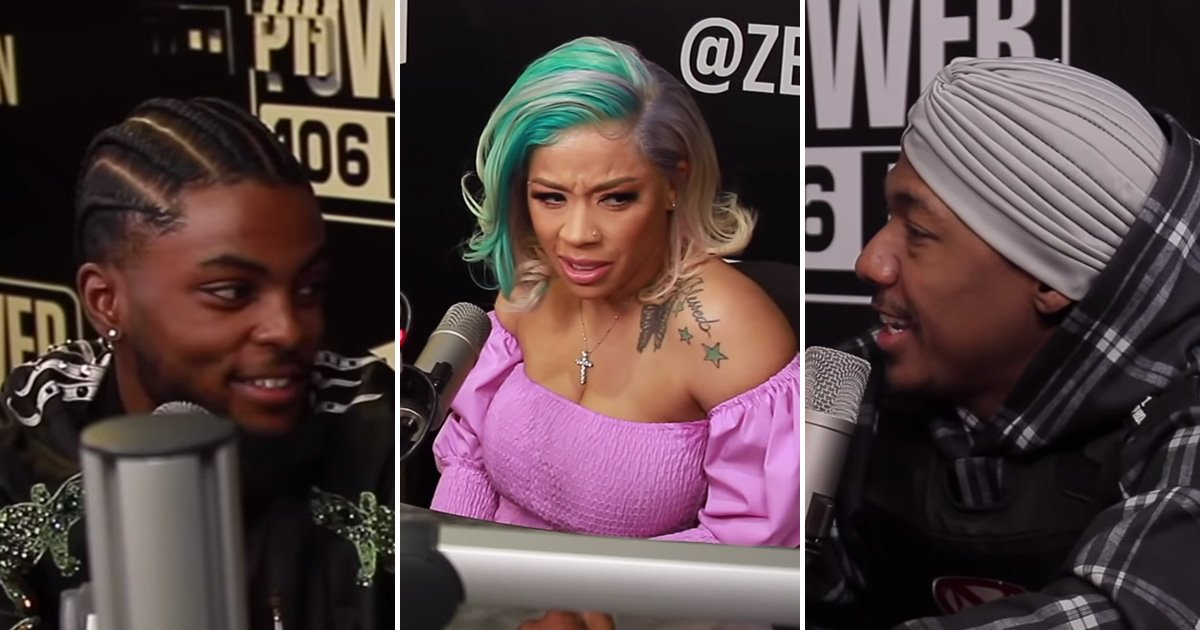 Despite being 14 years older than her boyfriend, Keyshia Cole does NOT like being called his “elder.”

Due to their huge age gap—Keyshia is 38 years old and Niko just turned 24 this year—the pair faced a ton of backlash on social media and became the subject of many jokes and memes when they first started dating.

Given the fact that Nick, who is 39, was once married to Mariah Carey, who is 10 years his senior, he’s very familiar with the idea of a younger man being with an older woman.

So he thought he’d use that shared experience in an attempt to bond with Keyshia and Niko. However, he may have offended Keyshia in the process by referring to her as Niko’s “elder.”

“To be in a relationship and to start a family with someone like this, I mean, I’ve been in that situation before where I stepped into royalty, to a elder, and she guided me,” Cannon said before Keyshia quickly cut him off.

Nick refused to back down from his statement and urged Keyshia to “embrace” her role in the relationship. “You are his elder what would you call it?” he asked.

“Mariah is YOUR elder,” Cole said, and Cannon agreed. “She is! She was, and I embraced it. There was nothing wrong with being a younger man that was molded and shaped by someone who was older,” he explained.

“She molded and shaped you?” Keyshia asked.

“Yes, I learned so much from Mariah, and I will be forever in debt to how she allowed me to come into manhood,” Nick said. “That’s when I became a man–when I got married and had children.”

Keyshia Cole and Niko Khale, an aspiring rapper, have been dating since 2018.

The couple briefly broke up last June, but were back together by July when Keyshia trolled the internet with a fake pregnancy announcement after getting body-shamed online.

In May of this year, Keyshia and Niko announced that they were expecting their first child together (for real this time).

Keyshia gave birth to a baby boy on August 1st. While the child is Niko’s first, it’s Keyshia’s second, as she has another son from her previous marriage to former NBA player Daniel Gibson.

Last month on Keyshia’s birthday, Niko gushed on Instagram: “Happy Birthday QUEEN! Everyday is like 90’s R&B [with] you … To many more.”

Two days later on Niko’s birthday, Keyshia wrote an equally sweet message on her IG: “Today is a VERY SPECIAL day!!! Your BORN DAY! And I’m happy to spend it with you! Love YOUUU!”