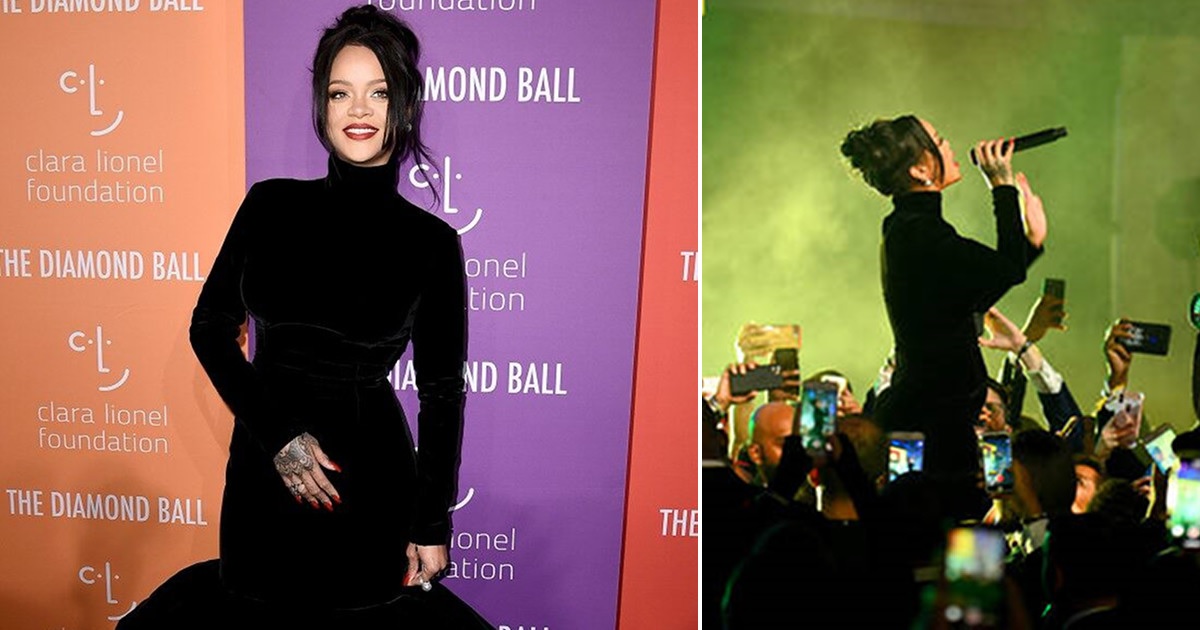 Rihanna returned to the stage last night. While she didn’t debut any new music, she did have a surprise for fans. And Twitter is freaking out!

Rihanna held her 5th annual Diamond Ball last night (Sept. 12), benefitting the Clara Lionel Foundation. But during the event, the singer sparked speculation that she may be pregnant with her first child.

She first raised eyebrows when she spoke with Essence on the red carpet about what it means to be a black woman. Her response:

.@Rihanna on Black women: “We are impeccable. We’re special and the world is just going to have to deal with that.” #DiamondBall pic.twitter.com/B94SQXwuWa

“My mother is an incredible example of how to fight through obstacles in life. I’m sure her mom taught her that and that’s how I’m going to be,” she added.

But it was when Rihanna took the stage with Pharrell Williams to perform their song, “Lemon,” that Twitter kicked into high gear. RiRi sported a noticeable bump, much like a baby bump!

Obviously, Twitter exploded with the thought that our Baby Girl RiRi may be pregnant. Rihanna and #RihannaIsPregnant became trending topics.

We been stressing Rihanna about this album, and sis had bigger things to worry about the whole time..#Rihannaispregnant pic.twitter.com/SjhS4kipW2

This is how everyone is looking right now after finding out that #Rihanna is pregnant ?? pic.twitter.com/mrwVZPR0v7

So Rihanna’s gonna release a baby before the album #Rihannaispregnant

Drake and Chris Brown after finding out Rihanna is pregnant pic.twitter.com/w4ikJKUODg

Drake after finding out Rihanna is pregnant with another man's baby.pic.twitter.com/On546BBd9o

We should note that Rihanna has NOT confirmed any pregnancy, it’s all speculation at this point. And it’s not the first time she’s faced such rumors; it also happened in late 2017.

Since 2017, Rihanna has been dating Saudi businessman Hassan Jameel, who is reportedly the heir to a $1.5 billion family fortune. The couple has kept their relationship mostly private, but its still going strong by all accounts.