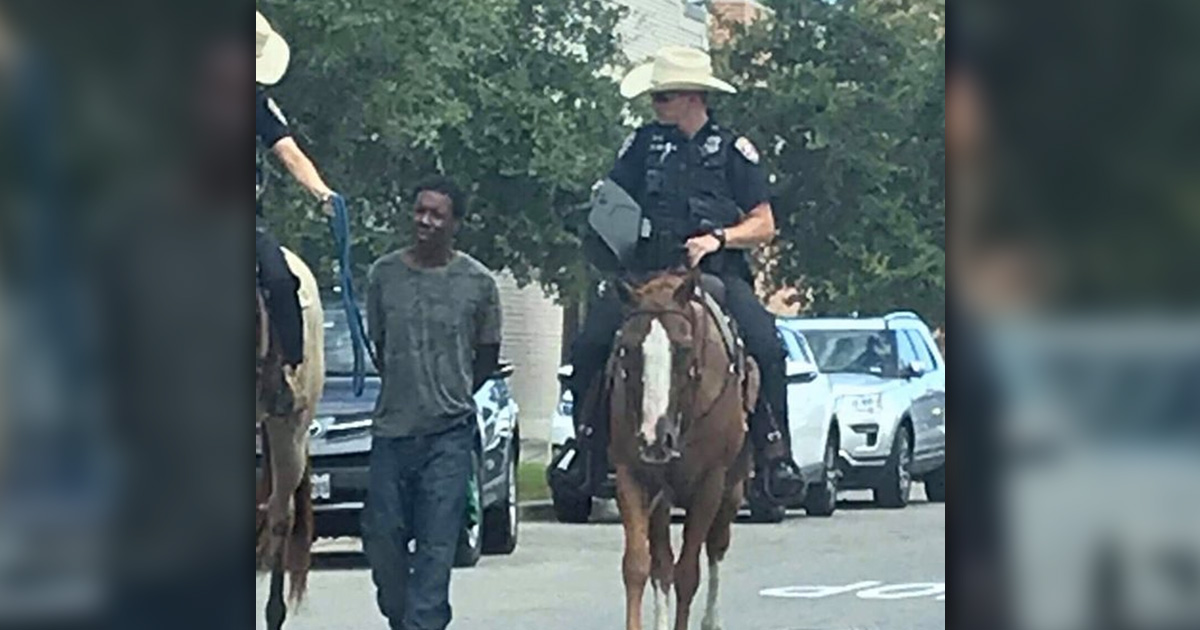 The Galveston Police Department in Texas is in the hot seat over a photo showing their officers walking a Black man down the street on a leash.

According to ABC 13 Eyewitness News, 43-year-old Donald Neely was arrested by Galveston police on Saturday (Aug. 3) after being accused of criminal trespass. Police said they warned him several times before taking him into custody.

A photo of Neely being walked on a leash by the police officers, who were riding on horseback, quickly went viral on social media, with many pointing out how the image is eerily reminiscent of a slave owner walking his slave down a road … in 2019, mind you.

Galveston PD officials said the officers were leading him around the corner, where a mounted patrol unit was staging when the picture was snapped, but members of the community ain’t trying to hear all of that.

“You don’t even do a dog like that,” said Sherri Kelly, visiting the island from Spring. “I don’t care. That’s inhumane.”

“Where were they walking him to and why did they rope him if he was handcuffed? I don’t think it’s right,” Cynthia Orise of Galveston said.

Some commenters online said it looked like the rope was tied to Neely’s hands, but police say he was handcuffed and the rope was attached to the handcuffs.

Galveston Police Department Chief Vernon L. Hale, III released a statement, saying that his officers weren’t being “malicious” while arresting Neely, however, he did admit that the cops did show “poor judgment.”

He said in part: “Although this is a trained technique and best practice in some scenarios, I believe our officers showed poor judgment in this instance and could have waited for a transport unit at the location of arrest.

“My officers did not have any malicious intent at the time of the arrest, but we have immediately changed the policy to prevent the use of this technique and will review all mounted training and procedures for more appropriate methods.”

The Galveston Police Dept. identified the officers in the photo as P. Brosch and A. Smith, ABC 13 reported.

The cops were wearing body cameras, which were turned on at the time of the incident, police said, adding that the officers will not face any discipline.

Neely’s sister said he’s mentally ill and homeless, and she was upset when she saw the photo online.