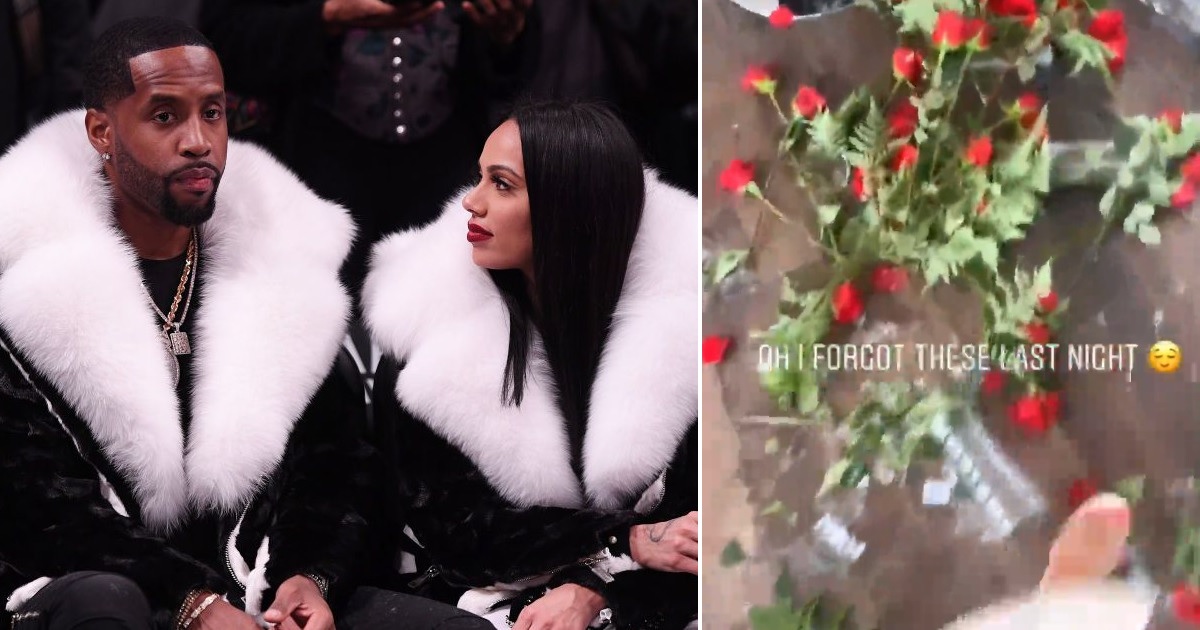 Another Love & Hip-Hop relationship is in shambles. Erica Mena has apparently dropped Safaree Samuels after his ex-girlfriend exposed him for allegedly cheating with her.

The videos showed Erica’s floor littered with broken vases and smashed roses that Safaree had sent her. “Scorpio Vibes,” she captioned the video.

Another clip showed Erica furiously knocking the flowers off a countertop an onto the floor.

By Friday afternoon, Safaree was apologizing on Twitter and begging his fiancée to take him back.

“This is not a loss I would be able to handle … I cannot lose you. You are my everything and I can’t see my future without you,” he wrote.

“I am sorry for any embarrassment I have brought to you from me being immature,” he continued. “I apologize from the depths of my soul & heart. You are the most important person to me in the world.”

This is not a loss I would be able to handle.. I’ve lost a lot b4 and dealt with it.. but seriously I cannot lose you. I have never felt so complete in my life and that feeling will be gone if I lose you. You are my everything and I cant see my future without you. Please Erica

I am sorry for any embarrassment I have brought to you from me being immature. I apologize from the depths of my soul & heart. You are the most important person to me in the world. I know this is a joke to some ppl but this is real life and I made a mistake. I’m sorry.

And after this I’m taking a real break from the world of every body’s opinions in ya business Social media. Misery loves company out here. Locking down and recentering!

The couple’s rosy relationship was seemingly shattered (like those vases) after Safaree’s ex, former Love & Hip-Hop Miami star, Gabrielle Davis, randomly shared a series of text messages between her and Safaree.

In the texts, Safaree professes his love to Gabrielle while also claiming that he has no plans of marrying Erica anytime soon.

Though it seems like Gabrielle released the texts to expose Safaree for cheating, the timeline is a little unclear.

Some of the texts seem recent while others are dated in May and November of 2018.

Safaree and Erica went public with their relationship in November 2018.

Erica didn’t forget about Gabrielle either. She seemingly called her a “basic b*tch” with a meme.

Safaree is so fucked up for that though smh. How you come with this Knight & Shining Armor disguise swearing you different from the next and play my sis smh. I feel sorry for Erica nobody deserves that. We all deserve happiness. I pray she finds it..

Safaree was in Jamaica clapping gabby cheeks ? while Erica was online bragging about their relationship.

Erica Mena and Safaree with this publicity stunt….. pic.twitter.com/oFWKTOpWYe

Erica is toxic as hell, and Safaree is forever looking for someone to take Nicki’s old spot in those feelings. They both need to seek help.

Wow. It looks like Safaree and Erica Mena are dunzo. What a shocker. pic.twitter.com/9DMSIn2yM1

And my reality show senses tell that Mona Scott-Young has a hand in all of the this and the LHH cameras are capturing it all.

(And we still don’t know who’s gonna clean up all that broken glass on the floor!)