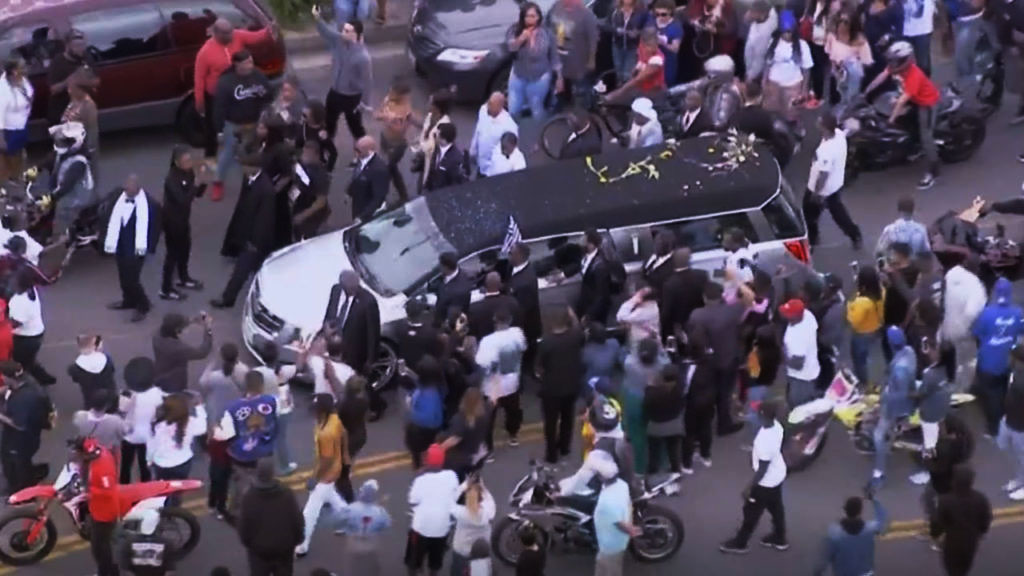 One person was killed and three others were injured in a drive-by shooting on the route of Nipsey Hussle’s funeral procession Thursday (Apr. 11).

According to the Los Angeles Police Department, the shooting took place on 103rd St. and Main St. around 6:25 p.m.

Police said three black men and a black woman between the ages of 30 and 50 were shot by several suspects riding in a gray Hyundai. Officials didn’t say which of the four shooting victims died.

The shooting happened as thousands of fans lined the streets of South L.A. to honor the life of Nipsey Hussle, who was tragically gunned down outside his The Marathon clothing store in Crenshaw on March 31st.

In the midst of this procession we have a multi-4 Shooting at 103 St and Main St.

Victims are 3 Male Blacks and 1 Female Black – ages from 30-50 years old. Tragically one is deceased.

Suspects in gray Hyundai fired on the victims.

We must stop this senseless violence.

Earlier in the day, a public memorial service was held for Nipsey at the Staples Center, and a number of the rapper’s celebrity friends and close family members paid tribute to the rapper with speeches and performances.

His girlfriend of the past six years, Lauren London, gave an emotional and moving speech and shared a recent heartfelt text message she sent to the rapper back in January.

Nipsey’s young children, Emani and Kross, also appeared on stage during the service, with the latter adorably grabbing the mic and babbling baby words much to the delight of the crowd and viewers at home.

Hussle (born: Ermias Asghedom) was described as a person who cared about his community and made it his mission to leave the world better than how he found it.

After his funeral, Nipsey’s hearse carried the rapper on a 25-mile journey around Los Angeles, making stops at notable locations, such as his The Marathon clothing store, before ending at Forest Lawn Memorial Park in the Hollywood Hills where he was laid to rest.