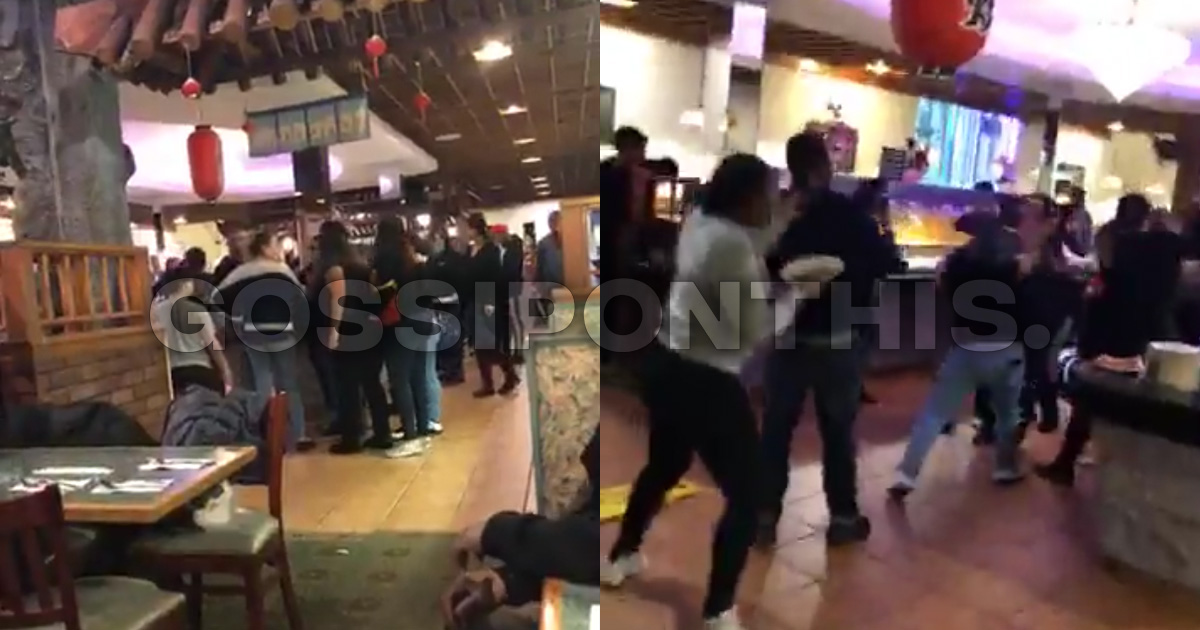 People are really out here showing their a-s-ses over crab legs.

A massive brawl broke out over crab legs a Chinese buffet in Queens, New York last month, and the whole thing was captured on video.

Video footage of the altercation shows several people pushing and hitting each other after the buffet’s most popular food item is brought out from the kitchen.

One of the people involved in the February 23rd incident told the New York Post that things got heated after another woman in the buffet line pushed her 10-year-old son with her hip.

“I was like, ‘Can you please do me a favor? I would appreciate it if you kept your hands off my child.’ And the mother comes over and she was like ‘You already had the first two batches,'” a 39-year-old woman who only identified herself as ‘Christine’ told the Post.

“I said ‘Listen, he’s 10-years-old, he’s going to grab maybe six or seven and we’re leaving. We’re gonna keep it moving.’ And she turns around and she goes ‘Privileged white bitch’ and that’s when everybody came over and started screaming,” added Christine, who is white.

Donna Brown, a customer at the restaurant not involved in the brawl, recorded the incident via Facebook Live.

“Listen y’all, I had to come out here to let y’all see this. I’m in a buffet and they are fighting over crab legs!” Brown says in the clip.

The 10-minute video shows a group of people shouting before a huge fight breaks out near the buffet.

“Craziness,” Brown says as the brawl goes on. “They throwing glass around. This is getting real now.”

Christine told the Post that she left the restaurant with a bleeding neck, bruises all over her body, and a bald spot from someone ripping her hair out.

The restaurant’s manager, Budi Chan, said that the fight involved two groups—a party of 16 people and another party of seven whom he said were regulars. “They had kids. Both [groups] were families,” Chan told the Post.

“It was out of control because at that time it was full so we were busy with customers, ” said Chan. “I know they started shouting, yelling so I just told them ‘Calm down, calm down.'”

Chan, who called 911, added: “They were hitting each other and I saw they pulled the hair.”

Chan said the fight was over by the time police arrived, and the customers involved had already left the premises. No arrests were made, but police are looking for a group of 10 people who started the fight.

The manager said this isn’t the first crab leg-related altercation he’s witnessed in his restaurant.

“Mostly the customers argue with the crab legs because when the crab legs come out people just rush and take them,” he said. “If we have a few guests when they come out, after maybe one or two minutes [the crab legs are] gone.”

Interestingly enough, the day before the brawl at the Queens buffet, reports emerged from Alabama that a fight broke out at a Huntsville restaurant between customers over crab legs.

Officer Gerald Johnson was simply trying to enjoy a nice Friday evening out when his dinner at the Meteor Buffet was interrupted. “Literally, as I sat down and maybe took two bites out of my plate,” Johnson said that’s when the fight started.

As the officer moved in the break up the melee, he watched as two diners, an elderly man and an adult woman, started fencing each other with metal tongs.

“It’s not something you typically hear, if you can imagine a fencing match,” Johnson said.

In that incident, police arrested 71-year-old John Chapman and 39-year-old Chequita Jenkins, who was eating at the buffet with her kids. According to News 19, Chapman was charged with disorderly conduct and Jenkins was hit with a third-degree assault charge.

“They’d been waiting there for the crab legs for a good 10, 20 minutes. When they finally came out, it’s very heated. Especially if someone is taking more than their fair share,” he told the news station. “Everyone was saying, ‘They cut me in line. She cut me in line. He cut me in line. I was here first.'”

Crab legs are good, don’t get me wrong … but is it really that serious?