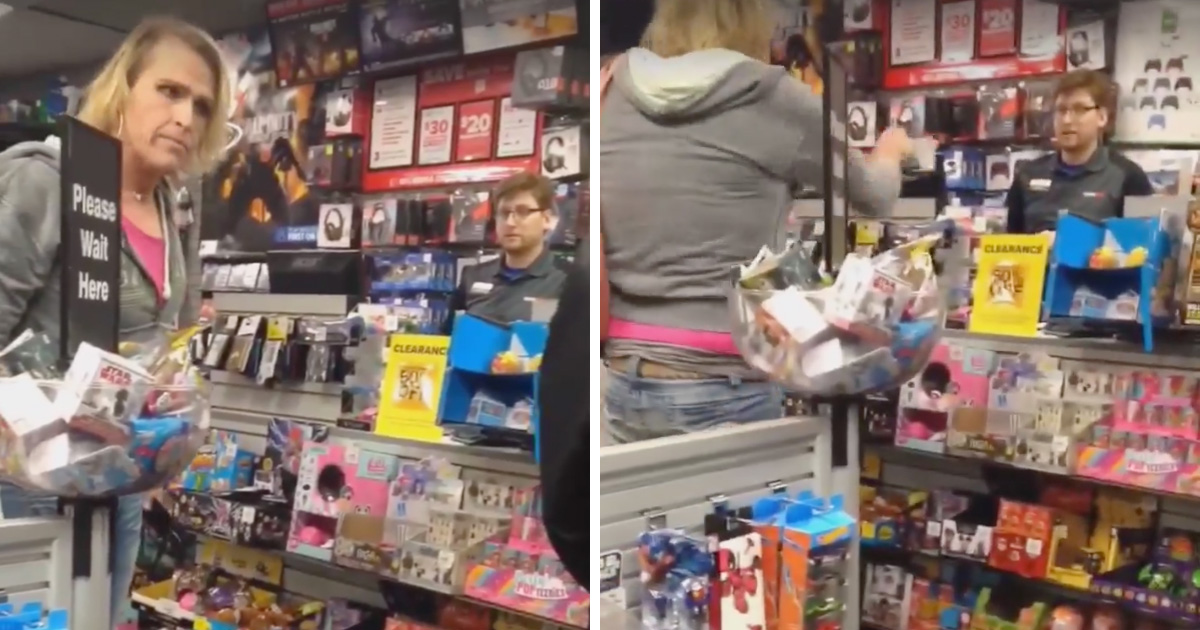 Video footage showing a transgender person going HAM on a GameStop employee for misgendering them has gone viral online.

The video begins with the trans person hurling expletives while attempting to get a refund from the employee. The employee apparently referred to the biological male as “sir” off camera, and when a female customer tried to intervene, she called the trans person a “sir” as well.

“I don’t want credit, you’re going to give me my f***ing money back!” the customer who identifies as a woman yells.

A woman not in view of the camera who took issue with the trans person’s vulgar language says to them in a calm voice: “Excuse me, sir, there’s a young man in here, you need to watch your mouth.”

The trans person then becomes instantly aggressive, shouting: “Excuse me—it’s ma’am! IT IS MA’AM!” Keeping her calm tone, the woman responds: “I’m sorry. I can call the police if you’d like me to. You need to settle down.”

Enraged, the trans person screams at her again, this time pointing in her face: “You need to settle down and mind your business!”

The clerk then says something inaudible, but you can hear the words “both of you guys,” which makes the trans person even angrier. “Ma’am! Once again, MA’AM!” they shout.

“I said, ‘both of you’,” the young employee contends, explaining that he was saying “both of you guys” in a general sense, and not referring to anyone’s particular gender.

The clerk appears to be talking to another customer at this point, and says the word “sir” again, which infuriates the already angry trans person even more than before.

“MOTHERF***ER, TAKE IT OUTSIDE! DO YOU WANNA CALL ME A SIR AGAIN?! I WILL SHOW YOU A F***ING SIR! MOTHERF***ER!” the trans person yells as the GameStop employee apologizes.

The aggressive customer then kicks down a display of products in the store and walks toward the exit door, but then turns back around.

After the clerks aks the transgender to stop cursing, they yell: “I’m gonna ask you for the fifth time to stop calling me a man, because quite clearly, I am not!”

The employee apologizes again: “I’m sorry for that, ma’am, I will get you that number, is that OK? I’m asking you to stop cussing.”

“I’m not cussing,” the trans person responds before grunting and heading to the exit door again. “You’re just going to keep bumping your gums and disrespecting trans people in this store, which I plan on telling the entire LGBT community. You’re going to lose money over this!”

The Daily Dot reached out to GameStop, but multiple employees stated they weren’t allowed to comment on the incident. They wouldn’t confirm the store where the incident occurred one employee did say that it happened at a store in Albuquerque, New Mexico.

Tiffany Moore, the transgender person in the video who identifies as a woman, reached out to the Daily Dot to explain what wasn’t seen in the footage. She said the GameStop employee in the video misgendered her “at least five times” off camera. “I would not have reacted like that if I hadn’t been so blatantly disrespected,” Moore explained.

Moore also said that she was concerned about another customer’s threat to call the police. “Trans people don’t have great interactions with the cops,” she said.

Moore said she’s had concerns for her safety ever since the video went viral. “I’ve been holed up at my parents’ property since the 26th,” she said, referring to when the video started to become popular. “I literally have no income coming in. It’s taking my ability to take care of myself away from me, it’s taking my livelihood away from me.”

Moore said she hasn’t been able to hire an attorney, but she hopes that GameStop will treat trans people with respect in the future. “All I want is for GameStop is to include trans sensitivity training in their hiring process,” she said.