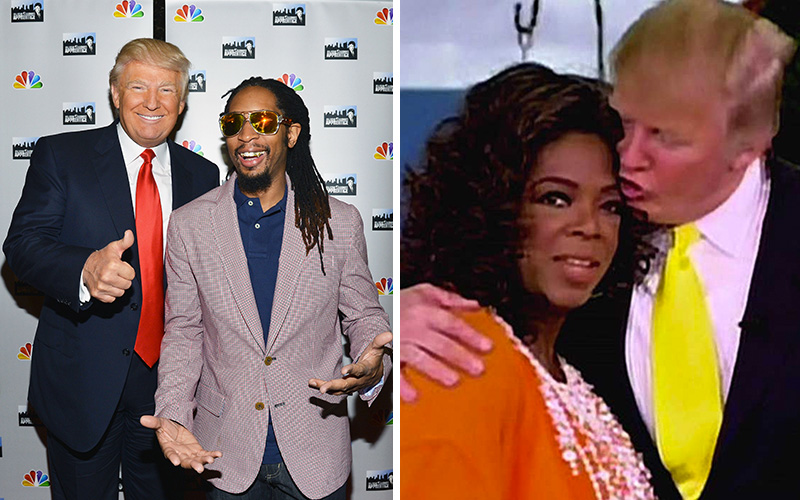 In between yelling at CNN’s Jim Acosta and dodging questions regarding his statement that he’s a white nationalist, Trump also denied knowing Lil Jon—who appeared on Trump’s Celebrity Apprentice show not just once, but TWICE.

Near the end of Trump’s bizarre post-midterm press conference, he was asked about accusations of racism, including Lil Jon’s claim that Trump called him Uncle Tom.

“Michael Cohen recently said you called black voters stupid; Omarosa has accused you of using the ‘N’ word, and the rapper Lil Jon has said you called him ‘Uncle Tom.’ What’s your response?” asked one reporter.

“I don’t know who Little Jon is,” Trump responded. “I really don’t.”

“He was on ‘The Apprentice,'” the reporter replied. (FYI: Lil Jon appeared on the reality show with Trump as a contestant in 2011 and 2013.)

Trump must have a terrible memory—either that or he’s lying his orange a** off—because we all remember when Lil Jon addressed the incident in a statement he shared to Twitter in 2016 in response to a report from The Daily Beast.

“When this ‘Uncle Tom’ incident happened on ‘Celebrity Apprentice’ in the boardroom several of my castmates and I addressed Mr. Trump immediately when we heard the comment,” the rapper/producer wrote on Twitter. “I can’t say if he knew what he was actually saying or not, but he did stop using that term once we explained (its) offensiveness.”

Here is a video showing Donald Trump warmly embracing Lil Jon and posing for photos with him just five years ago during an appearance at Trump Tower:

In addition to saying he had no idea who Lil Jon was, Trump also said that he doesn’t think Oprah likes him anymore—which is probably true.

“I was tempted to ask you why you liked Oprah,” one reporter said.

“Why do I like Oprah? What kind of question is that? He’s a comedian here,” Trump responded, gesturing to the journalist. “I do like Oprah. She was a person I knew well. She came to my place in Palm Beach often and I have a lot of respect for her.”

Trump added: “I don’t know if she likes me anymore but that’s okay.”