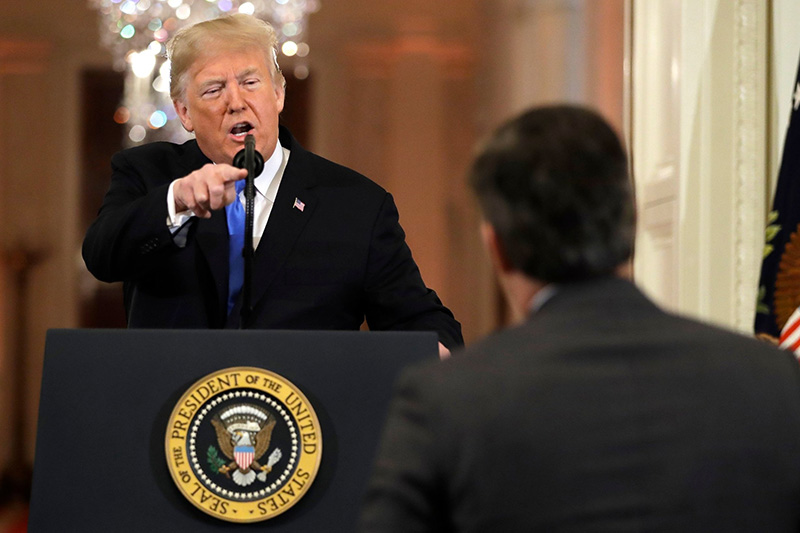 Following yesterday’s mid-term elections, Donald Trump held a press conference this morning that has been described by media outlets as “wild,” “off-the-rails” and “insane,” among many other things.

Trump—obviously pissed that the Democrats won control of the House—first called out each of the Republicans who lost in Tuesday’s (Nov. 6) midterms, saying they did “very poorly” and mocking them for failing to “embrace” him and his administration.

He also rambled about possible House investigations into his administration, talked crap about NAFTA, and bragged about how the United States has “the cleanest air.”

And then when it came time to answer questions from reporters, that’s when Trump really lost his sh*t.

Trump began taking questions and called on Acosta, who tried to ask about the president’s characterization of a migrant caravan of roughly 4,000 Central American immigrants who are walking through Mexico to claim asylum in the U.S.

Trump immediately interrupted Acosta as the journalist began to ask his question. “Here we go,” Trump said to Acosta.

Acosta then challenged Trump’s use of the word “invasion” to describe the caravan and asked the president if he thought he had demonized immigrants. Trump then said he wanted immigrants to “come in legally.”

When the president tried to go to another journalist, Acosta declined to give up the microphone and asked about possible indictments by special counsel Robert Mueller based on the ongoing investigation into Trump’s presidential campaign.

Trump told Acosta to “put down the mic” and a White House staffer tried to take the microphone from the CNN correspondent but he wouldn’t give it up.

Acosta finally relinquished the mic and sat down, but Trump then began to verbally berate him from the lectern.

“CNN should be ashamed of itself having you working for them,” Trump said. “You are a rude, terrible person. You shouldn’t be working for CNN.”

The president then moved to address the next questioner, NBC News White House correspondent Peter Alexander, who defended Acosta.

“In Jim’s defense, I’ve traveled with him and watched him, he’s a diligent reporter who busts his butt like the rest of us,” Alexander said.

“Well I’m not a big fan of yours either,” Trump said.

Acosta then stood up and began speaking to the president off microphone, to which the president responded, “When you report fake news, which CNN does a lot, you are the enemy of the people.”

Ladies and gentlemen, this what happens when you elect an oversized toddler to be POTUS. I pray to God we as a country make better decisions 2 years from now in the 2020 elections.