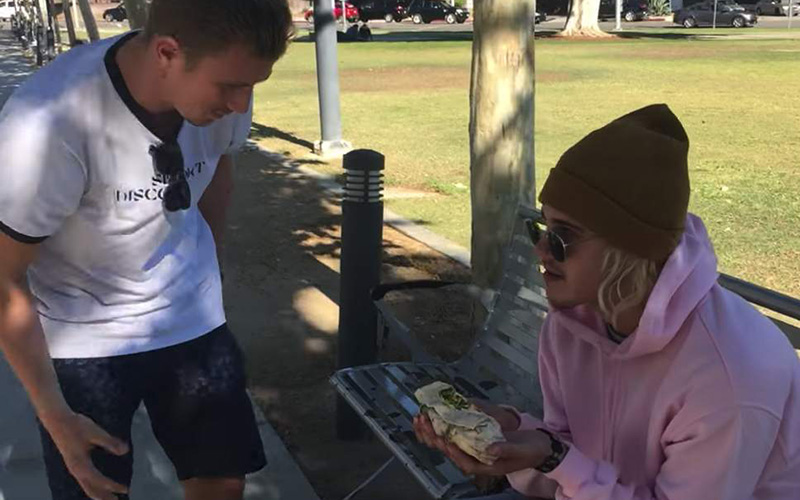 Remember last week when we called Justin Bieber out for being an MFin monster because he was pictured taking a bite out of a burrito from the side?

Well, it turns out, the man in the viral photo was NOT Justin Bieber after all. The whole thing was a viral prank!

The viral photo was actually staged by a group of YouTubers known as The Yes Theory using a Justin Bieber lookalike. The pranksters first planned a fake video of the Bieber impersonator helping an old woman across the street, but that one failed to go viral. They had better luck with their idea of Bieber eating a burrito like a weirdo.

The pranksters finally published a YouTube video explaining how they did it, and it wasn’t a small enterprise. They actually flew a Justin Bieber lookalike from Canada to Los Angeles and meticulously studied the real Bieber’s look. They made sure that the fake Bieber was wearing long pants and a sweatshirt because the real Bieber has quite a few tattoos. They even bought a wig to make the fake Bieber’s hair look closer to the real thing.

The explainer video is actually an interesting look at how to stage a viral prank. The pranksters tried to post the burrito photo to Reddit but were thwarted by the fact that they tried to post it on r/Pics, a huge community, and nobody noticed. But when they posted the image to a smaller sub, r/MildlyInfuriating, the photo finally made waves.

Paper magazine was one of the first mainstream publications to write about the photo and from there it spread everywhere from Cosmopolitan to Vanity Fair. It even reached highly respected mainstream news outlets like the BBC and plenty of morning news TV shows commented on Bieber’s burrito-eating techniques. The internet helped it spread, but this photo was basically made for light-hearted TV news shows.

The pranksters talked to a number of different news outlets and kept up the charade by pretending that they just happened to capture the image in a West Hollywood park. So it’s not like this was a simple misunderstanding. They deliberately set out to prank the internet and succeeded beyond their wildest expectations.

But just as quickly as the photo went viral, it’s also being debunked with incredible speed. The question, of course, is how many people who saw the first photo will see the debunker.

Well, it looks like the prank worked because even we were fooled!

Apparently, however, there’s at least one person out there who knew something was off the whole time.

In the comment section of a video about the prank on Justin’s manager Scooter Braun’s Instagram, Katy Perry wrote: “I knew it wasn’t [him] the hair was too clean.”

Lesson learned (even for us): You can’t believe everything you see on the internet.