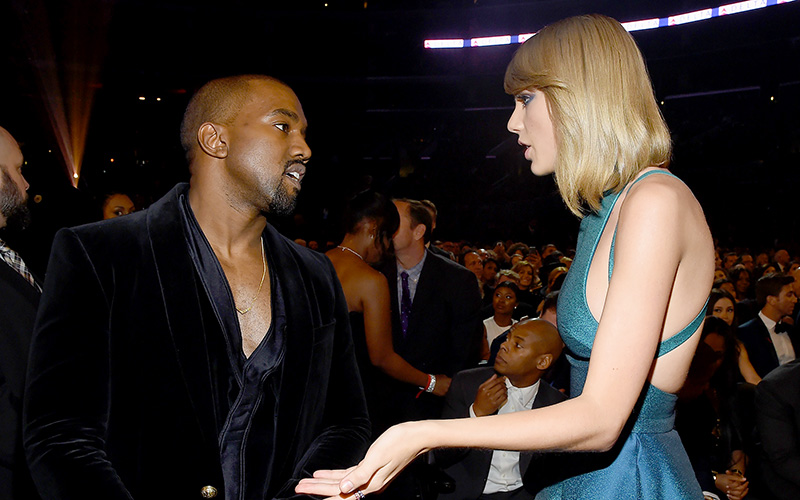 We are now living in an alternate reality where Taylor Swift is apparently more woke than Kanye West, which has EVERYONE hella confused.

Nine years ago, back in 2009, Kanye West hopped on the MTV VMAs stage to snatch Taylor Swift’s Best Female Video award out of hand because he thought Beyoncé, whose “Single Ladies” video was “the best video of all time,” according to Kanye, deserved the honor.

That incident sparked a feud between the two that has lasted nearly a decade. Now, almost 10 years later, Taylor Swift is out here speaking up for black people, and Kanye West is wearing MAGA hats and ranting and raving about his support for Donald Trump.

Earlier this week, Taylor Swift made national headlines and garnered a WHOLE LOTTA media attention when she made it known via Instagram that come November 6th, when she’s voting in the midterm elections, she will be voting Democrat. Read her entire post below:

I’m writing this post about the upcoming midterm elections on November 6th, in which I’ll be voting in the state of Tennessee. In the past I’ve been reluctant to publicly voice my political opinions, but due to several events in my life and in the world in the past two years, I feel very differently about that now. I always have and always will cast my vote based on which candidate will protect and fight for the human rights I believe we all deserve in this country. I believe in the fight for LGBTQ rights, and that any form of discrimination based on sexual orientation or gender is WRONG. I believe that the systemic racism we still see in this country towards people of color is terrifying, sickening and prevalent.

I cannot vote for someone who will not be willing to fight for dignity for ALL Americans, no matter their skin color, gender or who they love. Running for Senate in the state of Tennessee is a woman named Marsha Blackburn. As much as I have in the past and would like to continue voting for women in office, I cannot support Marsha Blackburn. Her voting record in Congress appalls and terrifies me. She voted against equal pay for women. She voted against the Reauthorization of the Violence Against Women Act, which attempts to protect women from domestic violence, stalking, and date rape. She believes businesses have a right to refuse service to gay couples. She also believes they should not have the right to marry. These are not MY Tennessee values. I will be voting for Phil Bredesen for Senate and Jim Cooper for House of Representatives. Please, please educate yourself on the candidates running in your state and vote based on who most closely represents your values. For a lot of us, we may never find a candidate or party with whom we agree 100% on every issue, but we have to vote anyway.

So many intelligent, thoughtful, self-possessed people have turned 18 in the past two years and now have the right and privilege to make their vote count. But first you need to register, which is quick and easy to do. October 9th is the LAST DAY to register to vote in the state of TN. Go to vote.org and you can find all the info. Happy Voting!

That’s right, folks. Taylor Swift cares more about black people than Kanye West does! WTF happened, and how did we get here?

Naturally, Black Twitter is confused as all hell. Peep some of the best responses below:

If you had told me two years ago Kanye would be running around in a MAGA hat while Taylor Swift was endorsing democratic candidates, I would have smacked you to the ground and stolen your wallet for wasting my time.

Taylor Swift cares more about black people than Kanye West and now I need to lay down because I got a headache just from tweeting that.

How in the hell am I rooting for Taylor Swift and not Kanye West in 2018?

What is this world? I want off the carousel.

Wait, wait, wait… Kanye is the Trump supporter and TAYLOR SWIFT is the liberal? pic.twitter.com/FJTSmlqKhZ

So… Kanye is MAGA and Taylor Swift is endorsing Democrats in TN. This screening of Interstellar 2 is fascinating. Buy a lottery ticket. Anything is possible in this timeline.

I can't believe I'm out here fact-checking/defending Taylor Swift but here we are….

1. If there was any ending done of Taylor's career it was actually Kim who did it…not Kanye

2. She just had the highest grossing US tour by a woman – so her career is doing better than ever pic.twitter.com/5yC1nINzxB

All jokes aside: What Taylor Swift just did is extremely important. Let's not forget: 53% of white women voted for Donald Trump. Having someone like Swift — who has a MASSIVE fanbase — come out against a Trump darling candidate like Marsha Blackburn is monumental in many ways.

“4chan Nazis devastated by Taylor Swift’s TN Senate endorsement” is the energy I needed to carry me into Monday.

2018 has Kanye in a MAGA hat and Taylor Swift talking about systemic racism. pic.twitter.com/dngYuOOTbo

The 2018 midterm election is officially a proxy war between Taylor Swift and Kanye West. pic.twitter.com/fahGqZA9OQ

Kanye: I deactivated all my acc-
Taylor: pic.twitter.com/HWBUXqGtoh

Someone should probably start a support group for those of us who originally picked the wrong side of the Kanye/Taylor Swift debate.