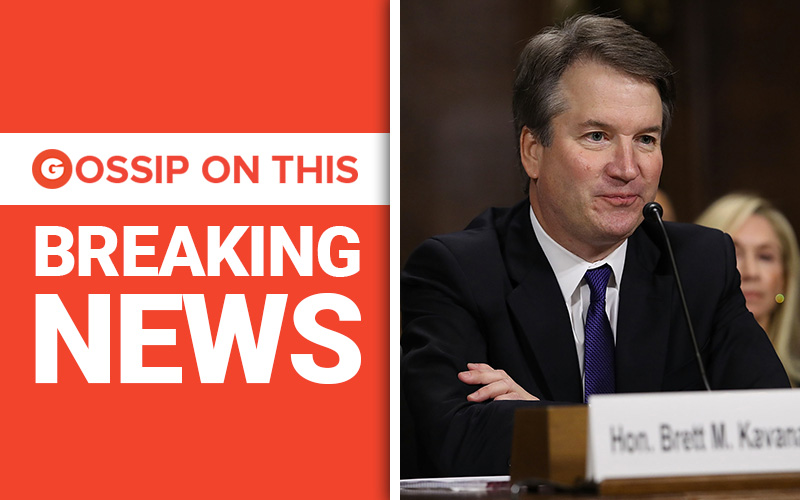 Brett Kavanaugh will replace Anthony Kennedy as the next justice on the United States Supreme Court after receiving enough votes from the Senate. He could be sworn in as early as Monday (Oct. 8).

The Senate voted 50-48 to confirm Brett Kavanaugh to the Supreme Court Saturday, the narrowest vote on a Supreme Court nomination in 137 years.

The confirmation is a major victory for Republicans after sexual harassment allegations against Kavanaugh threatened to sink his nomination in recent weeks. His appointment could move the top court to the right for a generation.

It was the most heated and controversial confirmation in recent memory, with hundreds of people protesting in the halls of the Senate over the last two weeks as well as outside the Capitol and the Supreme Court on Saturday. During the vote, several protesters started screaming and shouting from the gallery down toward the senators on the floor, before being escorted out.

Only James Garfield nominee Stanley Matthews, who was nominated by a 24-23 record in 1881, has had a tighter nomination victory than Kavanaugh.

Only two senators broke with their parties on the nomination. Sen. Joe Manchin of West Virginia was the only Democrat to vote for Kavanaugh. Sen. Lisa Murkowski of Alaska was the sole Republican to oppose him, however she was officially marked as present rather than a no.

This is because she “paired” her vote with Republican Sen. Steve Daines, who would have voted yes but was in Montana Saturday for his daughter’s wedding. By voting present, Murkowski removed one no vote to match his missing yes vote. Daines was prepared to fly back to DC, so the only real-world effect of Murkowski’s move was to allow him to stay at the wedding. Had they both voted, the outcome would have been unchanged, but the final tally would have been 51-49 in favor of confirmation.

Vice President Mike Pence was on-hand for the vote, though he was not needed to break a tie. Pence made the final announcement that Kavanaugh will now be the next Supreme Court justice.

Kavanaugh’s confirmation could mark a significant shift to the right for the Supreme Court. He replaces Justice Anthony Kennedy, widely seen as the swing vote on the court, who retired in June. With the court being made up of four reliable conservative-leaning justices, and four liberal-leaning justices, Kennedy often played the role of tie-breaker.

Kavanaugh’s nomination initially seemed like a safe bet in July, but became imperiled in September after Palo Alto professor Christine Blasey Ford came forward with allegations that Kavanaugh held her down, groped her, and covered her mouth to muffle her screams during a party when they were both in high school. The vote was delayed to hear testimony from Ford and Kavanaugh, and then delayed again when Republican Sen. Jeff Flake sided with Democrats demanding a week-long FBI investigation into the allegations.

Senators spent Thursday reading the results of the FBI investigation. Republicans say the FBI cleared Kavanaugh and found no signs of wrongdoing. Democrats have suggested that’s not wholly true and railed against the process, pointing to the fact that only 9 people were interviewed despite dozens of names of possible witnesses being put forward. “It smacks of a whitewash,” said Democratic Sen. Richard Blumenthal.

Because the report is confidential, senators refused to discuss specifics of what the FBI found and the public has no way of drawing its own conclusions.

Republicans dismissed Democrats’ criticisms as pure obstructionism and pushed forward with a vote, with Majority Leader Mitch McConnell saying Thursday, “There’s no way anything we did could satisfy Democrats.”

Just before the vote Saturday, McConnell argued that “a vote to confirm judge Kavanaugh today is a vote to end this brief, dark chapter in the senate’s history and turn the page toward a brighter tomorrow.” McConnell added that Kavanaugh will “make the Senate and the American people proud.”

The nomination battle has caused a surge in grassroots anger on both the left and right, with midterm elections just weeks away and control of Congress hanging in the balance. In his own speech ahead of Saturday’s vote, Senate Minority Leader Chuck Schumer acknowledged that Democrats had lost the battle on Kavanaugh, but encouraged the “many millions who are outraged by what happened here” to vote.

Now that the Senate has confirmed him, Kavanaugh can be sworn-in as a justice at any time and could begin work at the Supreme Court as early as next week. The court is set to hear cases on Tuesday, so Kavanaugh could potentially be on the bench as soon as Tuesday at 10 a.m. The White House did not immediately respond to a request for comment on when he will be sworn-in.

Kavanaugh, who worked in the George W. Bush White House and was part of Ken Starr’s team investigating Bill Clinton, is expected to be a more consistently conservative justice than his predecessor. While Kennedy was appointed by Ronald Reagan and frequently voted with the conservative bloc, he also sided with the liberals on key cases such as legalizing same-sex marriage and placing limits on the death penalty.

But not everyone agrees with that assessment. Sen. Susan Collins, a moderate Republican whose endorsement of Kavanaugh on Friday put him over the 50-vote threshold, said in a speech announcing her decision that she believes he will not support overturning gay marriage, the pre-existing condition protections of Obamacare, or Roe v. Wade.

Roe had been a major concern of pro-choice activists who feared Kavanaugh will be the fifth Supreme Court vote to overturn abortion rights. But Collins said that in her two-hour discussion with Kavanaugh he described Roe as settled law, and said Supreme Court justices have no right to overturn settled law just because they disagree with it.

President Donald Trump told reporters just before Saturday’s vote that he was pleased that Collins came around, calling her speech “from the heart” and said he looked forward to Kavanaugh joining the Supreme Court. “He will be a great justice of the Supreme Court. People have thought that for ten years. They thought he’s just an extraordinary person, a great, great talent and I think he’s going to make us all very proud,” Trump said.