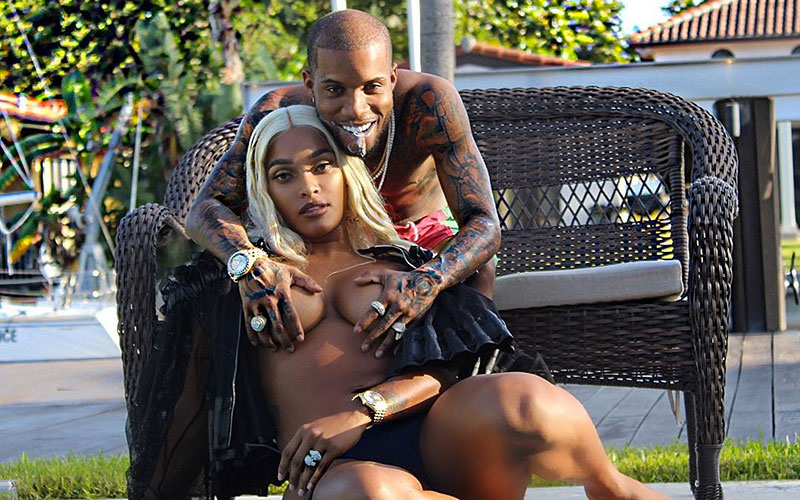 Last week, reality star Joseline Hernandez sparked rumors that she was dating rapper/singer Tory Lanez after she posted not just one, but two photos of them together on Instagram.

The first photo was VERY intimate and it showed him cupping her breasts, while the second was simply of them sitting on a patio and laughing while sipping wine together.

Fans were wondering what was up between the two, and Joseline confirmed that she and Tory are a couple and are DEFLEE bumping uglies on the regular.

“I can tell you one thing. I love him like a fat girl loves cake,” Hernandez told Bossip.

She also used a huge ear of corn to symbolize that Tory was packing some “big beefcake” and said that would fight any girl out there checking for him. “These girls better watch out, because I will fight them,” she said.

It looks like Tory Lanez is Joseline’s rebound after she and her baby daddy Stevie J officially broke things off in December 2016, just a few days before she gave birth to their daughter Bonnie Bella. Stevie J has clearly moved on from the relationship as well, because he and Faith Evans tied the knot in a secret “quickie wedding” in Las Vegas back in July.

In a separate interview with Bossip earlier this month, Joseline said she and Stevie are not currently on speaking terms and he owes child support for eight months. She also claimed that the Love & Hip Hop Atlanta star hasn’t seen their 21-month-old daughter in five months.

In other Joseline news, the former LHHATL star has been shooting her own reality show called Joseline Takes Miami, which is set to premiere on WE TV sometime this fall.