GOSSIPONTHIS.COM Pop Culture Jesse Williams Made a Nike Meme to Promote His New Emmett Till... 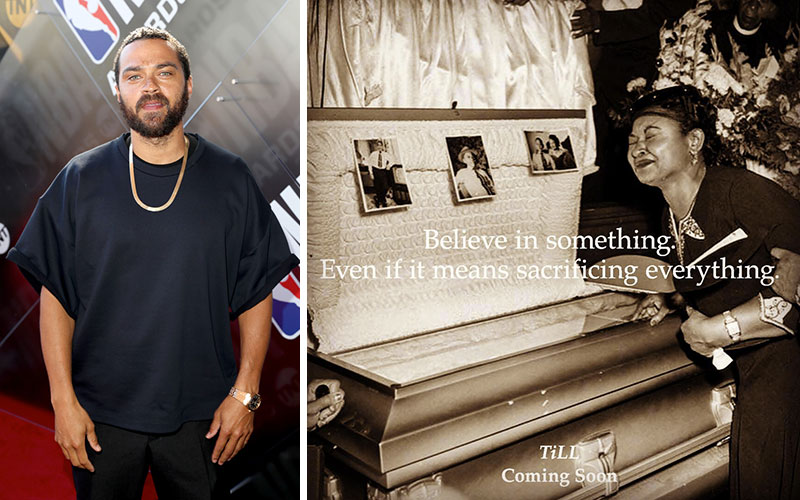 Actor Jesse Williams took a huge L on Twitter today after he came up with the not-so-bright idea of using a meme to promote his upcoming Emmett Till movie. Any other day, Williams would be considered one of the wokest actors in Hollywood, but, today, it looks like he was caught taking a nap.

In an effort to promote a film about the tragic death of Emmett Till that he’s set to direct, Williams posted an image of Mamie Till-Mobley, Till’s mother, crying at her son’s casket in the style of Nike’s recent “Just Do It” ad campaign featuring Colin Kaepernick.

Williams’ upcoming movie, Till, will focus on the murdered teen’s mother’s search for justice, and is based on Keith A Beauchamp’s 2005 documentary, “The Untold Story of Emmett Louis Till.”

In his widely-shared meme, Williams wrote in superimposed words “Believe In Something. Even If It Means Sacrificing Everything,” in a style similar to the Colin Kaepernick Nike ad. The original Nike ad has been turned into numerous memes, so Jesse likely thought to himself: “Hey, this could be a great way to get a lot of attention for this new movie I’m doing about Emmett Till.” Which, as it turns out, he is getting a lot of attention, but probably not the kind he was looking for.

The actor announced Monday (Sep. 24) he would be directing Till, which will be produced by Whoopi Goldberg, according to Deadline. But Williams quickly deleted his announcement about the movie Monday afternoon after receiving backlash in response to the photos he posted.

Williams later replaced his tweets with another announcement about the movie featuring screenshots from Deadline’s article.

He also shared a number Nike ad-like images on Instagram, which he also deleted, except for one featuring Till’s great-uncle Moses Wright at the teen’s murder trial.

“Thank you for taking down those other bullsh*t ass memes. You need to delete this one too. This is not a game. I think you know that,” one Instagram user commented under the meme of Wright in court as he pointed out the men who beat and shot his grand nephew.

Emmett Till was just 14 years old when he was lynched after being accused of flirting with a white woman in Jim Crow-era Mississippi in 1955.

As expected, Twitter dragged Williams for implying that Mamie Till put her son up for an offering to be murdered by racist pigs who were hellbent on believing a lie and murdering a young black boy. Also, memes are usually meant to be funny … and nothing about this incident should be considered humorous by any means at any time.

Check out some of the most poignant responses below:

So Jesse Williams divorces a black woman and loses his good sense it seems…what is this?! Emmett Till wasn't a sacrifice he was murdered by white supremacy.

(Also too many people liked this bullshit) pic.twitter.com/i5ZlBRnuWh

Someone on Jesse Williams' PR team should've told him this ain't it. Not only are we making another movie about sadism & white supremacy, but now we're making memes of real-life photos?? This shit wasn't even that long ago. My living grandparents are older than this. SMFH.

Jesse Williams is the primary example of someone who should've just sat there and ate his food.

cancel culture™ gotta do their thing and get jesse williams tf outta here.

Remember when y’all negroes were damn near anointing Jesse Williams as the next MLK or Malcolm X because of a BET Awards speech lmaooooo ?????

Jesse Williams posted that photo of Mamie Till with the Kaepernick quote like she made a choice to sacrifice her son to uh… murder.

Let's think about things before we slap a meme over it.

Jesse Williams just made Emmett Till into a Nike meme. Bruh…..

Jesse Williams or his team didn’t think an Nike inspired meme with Emmett Till’s mom crying near her son’s casket was offensive?

Then had a nerve to say “Believe in something. Even if it means sacrificing everything.” as if she sacrificed her son. #TillTheMovie @iJesseWilliams

Jesse Williams' tweets today about Emmett Till, is exactly why there’s only like 3 light skin people in Wakanda.

"I stand with Jesse Williams" pic.twitter.com/K0El4NQZwT

Remember when folks thought Jesse Williams was the shit for that one speech? pic.twitter.com/JSuaYYGN2A

Jesse Williams couldn't even respect and be decent to his black wife so of course he will commercialise a black woman's pain. Is this your BLACK ACTIVIST?

I know damn well Jesse Williams did not just make Emmett Till into a Nike meme. pic.twitter.com/K9BgrR0xUD

If you're a fan of Jesse Williams, change your mind right now. pic.twitter.com/90xtjszX3x