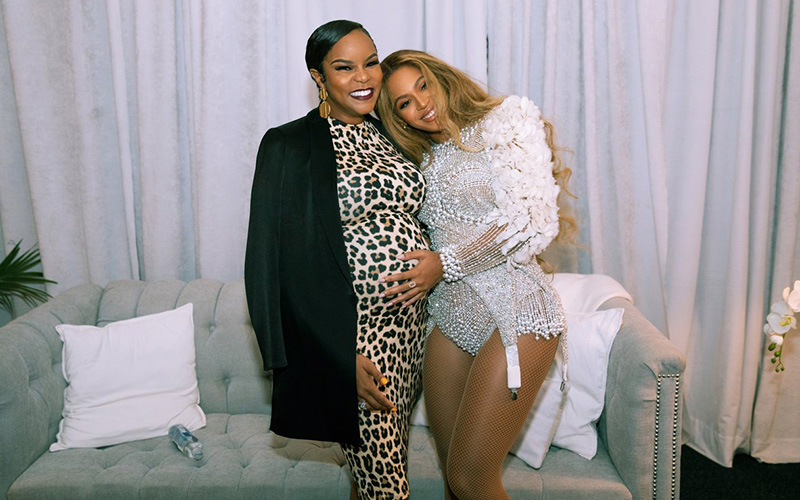 After a brief hiatus (and a well-deserved birthday vacation), Beyoncé resumed her “On The Run II” tour with husband JAY-Z in Dallas, Texas Tuesday night (Sep. 11).

But before hitting the stage, Beyoncé spent some quality time with her (VERY PREGNANT) former Destiny’s Child bandmdate LeToya Luckett, who is expecting her first child with husband Tommicus Walker.

We all know the story … Luckett and LaTavia Roberson were kicked out of Destiny’s Child in 2000 amid drama with management (aka Beyoncé’s father Mathew Knowles) right before the group became a household name.

LeToya and LaTavia were quickly replaced by Michelle Williams and Farrah Franklin, but didn’t find out until after the video for “Say My Name” premiered on television. Franklin was later ousted from the group as well after she missed too many shows and didn’t really “mesh” well with the other group members, and they decided to keep the group as a trio with just Beyoncé, Kelly and Michelle.

But it looks like all of that is behind them now, as Beyoncé reunited with LeToya and shared a photo of them hugging on her official website. Mama Tina reposted the photo on her Instagram page, writing “Congratulations Letoya you are gonna be the best mommy.”

With Beyoncé being a mother of three, perhaps she’ll have some helpful advice to share when LeToya gives birth—which, judging by the size of her baby bump, will be soon.