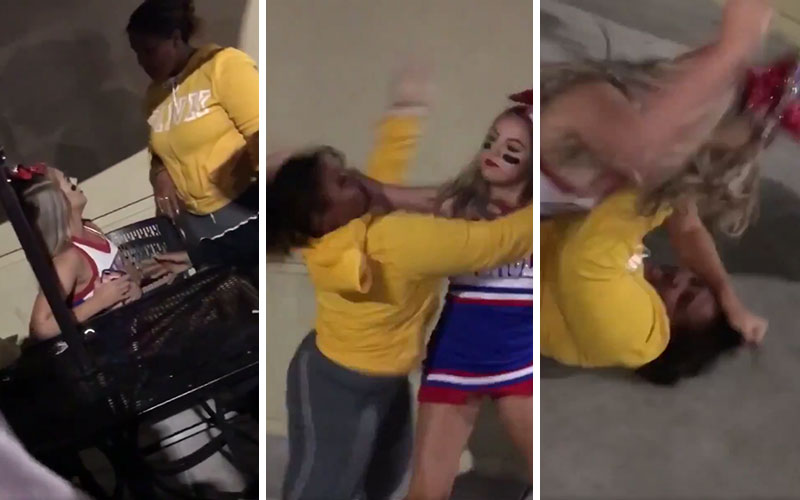 Video footage showing the moment a high school cheerleader beat down a “bully” who challenged her to a fight and then sucker-punched her has gone viral on the internet.

“So my little sister got in a fight tonight and I don’t think I’ve ever been more proud,” Sierra Sprague tweeted. “With her phone in her hand & everything lmao THATS MY MF SISTER LETS GOOOOOOO.”

so my little sister got in a fight tonight and i don’t think i’ve ever been more proud ?? with her phone in her hand & everything lmao THATS MY MF SISTER LETS GOOOOOOO pic.twitter.com/8Bpxc30d0Z

The clip on Twitter has more than 8 million views, over 100K retweets and close to 400K likes. It was also reposted on WorldStarHipHop where it has nearly 2 million views.

In the footage, the girl can be heard asking Savannah, who was wearing her cheerleading uniform and sitting at a table with other members of her cheerleading squad, if she wanted to fight, to which Savannah responds: “Nobody wants to fight. You guys want to fight us. Nobody speaks on you guys. Nobody talks about you guys.” The girl then walks up oto Savannah and stands over her and Savannah can be heard telling the other girl to get her finger out of her face.

At one point, Sprague gets the best of her unidentified opponent and can be seen on top of her pummeling her with repeated blows to her back and face while other students cheer them on.

One student off-camera could be heard shouting “You got your a** beat!” as the two part ways after brawling. It’s not clear who they were referring to, considering another version of the video shows Sprague’s opponent landing a number of punches as well.

The other girl posted the “unedited” version of the fight on her Twitter account (which she has since deleted) and retweeted several people supporting her. “Looking at this video it was a tie now. If it wasn’t ole girls sister wouldn’t have went out her way not to post the whole thing,” one person tweeted.

“That cheerleader did not beat her ass. If anything it was a fair fight. I’m only commenting cuz I’m sick of seeing the video and her bragging she whooped ass like sis didn’t get wit her towards the end,” tweeted another.

A third person said, “Didn’t take no L are we watching the same fight nobody won they both had great moments stand up skinny girl was winning but she should’ve stay up cuz she got f*cked up on the ground so TIE fight again.”

Others, however, said the video still showed the cheerleader winning.

“She like triple her size and fighting someone who didn’t wanna fight so yeah the big girl still took a L,” wrote one person.

“The girl in the yellow still lost,” said another. “Damn that skinny white girl rocked u,” another person tweeted.

“You still got beat by a girl that didn’t wanna fight take your L sis,” wrote another Twitterer.

Another tweeted: “Bruh I’m still pumped for the white girl. Unedited or not girl in the yellow thought she had an easy ass fight… picking on someone half her size AND SITTING DOWN?!?”

Savannah’s sister, Sierra Sprague, a 19-year-old YouTuber, wrote to the other girl: “wouldn’t be bragging with that [sleep emoji] you got rocked by someone who’s 150 pounds less than you with ONE HAND after you sucker punched them … no hair pulling like you did, straight hands. accept the L.”

i wouldn’t be bragging with that “?” you got rocked by someone who’s 150 pounds less than you with ONE HAND after you sucker punched them ? no hair pulling like you did, straight hands. accept the L https://t.co/6Pvt1dnIXf

Sierra added: “Let somebody else lay a hand on her and you gonna get rocked by me too.”

The incident occurred at Clayton Valley Charter High School in Concord, California, where Sprague is a student and a cheerleader for the Ugly Eagles, according to the New York Post.

Neither school officials nor the cheerleading team’s coach have commented on the fight, but according to a tweet from Sierra, Savannah is still on the team “and in no trouble.”