GOSSIPONTHIS.COM Celebs Cardi B Explains Why She Tried to Fight Nicki Minaj, Says It... 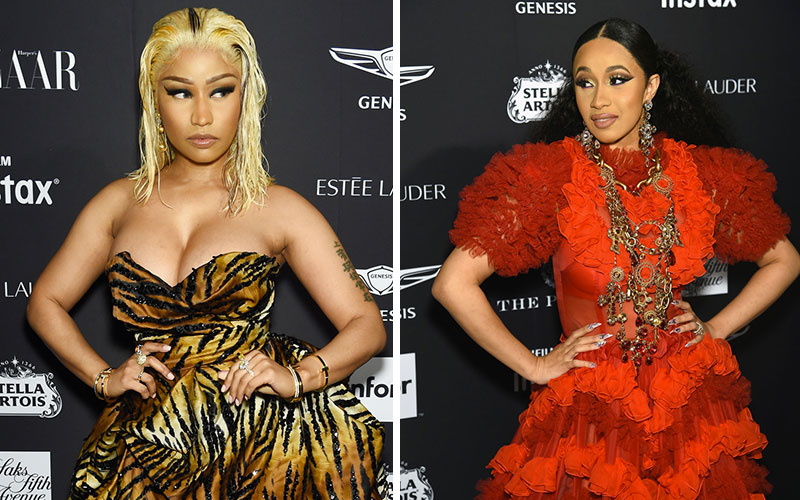 Cardi B says she has let a lot of things slide when it comes to Nicki Minaj, but she is NOT letting Nicki off the hook for coming for her parenting skills.

Cardi B was escorted out of a New York Fashion Week party hosted by Harper’s Bazaar Friday night (Sep. 7) after trying to fight Nicki Minaj.

Video footage posted on social media showed Cardi being held back as she was escorted out of the party, and reports emerged that Cardi threw a shoe at Nicki after Nicki’s bodyguards blocked her attempts to lay hands on her.

Amid all of the ruckus, Cardi ended up getting hit by someone (reportedly one of Nicki’s bodyguards), and photos showed Cardi leaving the party with one shoe off and a knot on her forehead. Nicki later posted a video on Instagram, apparently driving away from the party, seeming completely unbothered.

Cardi, who just gave birth to her daughter Kulture in July, also took to Instagram shortly after leaving the event to explain her side of the story and why she decided to try to fight Nicki.

Without mentioning Nicki by name, Cardi freely laid out all of her issues with her rap nemesis, saying that Nicki tried to blackball her from the industry. But the last straw came after Nicki allegedly attacked her parenting skills.

“I’ve worked [too] hard and come too far to let anybody fuck with my success!!!!” Cardi wrote. “Bitches talk about that sh** in [their] raps but in real life they p***y!! This sh** really is for entertainment!!”

Nicki has yet to publicly address the altercation, but she has been updating her Instagram with photos of her at the party, including this one with her, Lala Anthony and Kelly Rowland:

Meanwhile, Twitter has been having a field day with the drama:

Internet: Cardi b and Nicki got in a fight

Me coming back to the Internet pic.twitter.com/Cqk19ufOq4

Internet: Cardi b and Nicki got in a fight

Me coming back to the Internet: pic.twitter.com/BIVIdYGDxR

leaked footage of Cardi B throwing her shoe at Nicki Minaj pic.twitter.com/W1FmE7GUro

Literally this was Nicki when Cardi was trying to run up pic.twitter.com/cb26tQVBbM

me w this Nicki & Cardi beef bc im still vibing to Invasion Of Privacy & Queen ????? pic.twitter.com/Xyvzn34wKj

the uk waking up to the cardi and nicki minaj fight pic.twitter.com/Xf6n72qbne