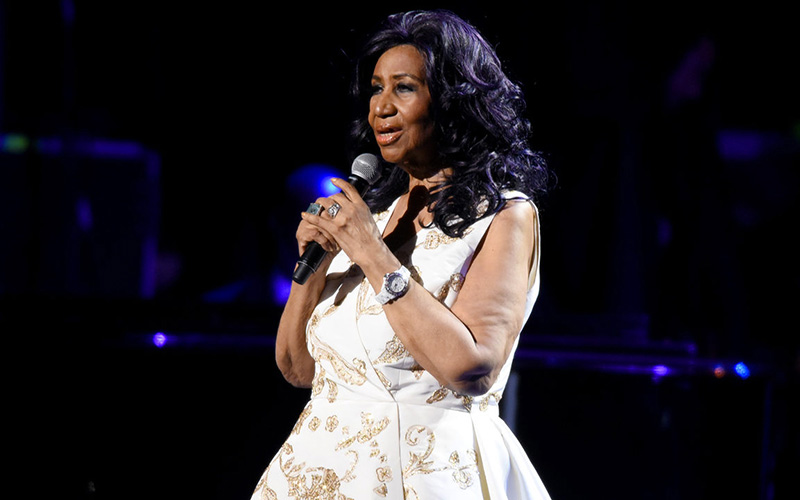 Aretha Franklin died on August 16th at the age of 76 at her Detroit home after several days in hospice care following a long battle with pancreatic cancer.

After her death, Franklin’s family issued a statement saying: “In one of the darkest moments of our lives, we are not able to find the appropriate words to express the pain in our heart. We have lost the matriarch and rock of our family.”

Aretha Franklin was one of the most successful American singers of all time and the first ever woman to be inducted into the Rock and Roll Hall of Fame. But what about her her family life? Who are her children? How old was she when they were born and where are they now?

Franklin married twice and gave birth to four sons, and some of them have followed in her footsteps by launching music careers. She didn’t have any daughters, all of her children are boys.

Here’s what you need to know about Aretha Franklin’s children:

1Clarence Franklin, Aretha’s first child, is named after her father, who was rumored to be her child’s father at one point.

Clarence pictured with his younger brother Kecalf and Aretha.

Aretha was just 12 years old when she became pregnant for the first time. She gave birth to her first child, a son she named Clarence, after her own father, Rev. C.L. Franklin, on January 28, 1955, just three months before her 13th birthday.

Not much is known about her first pregnancy because the musical icon didn’t talk about it much with the press, although we do know she did go back to school after giving birth.

According to the Daily Mail, at one point, rumors began to spread that Franklin’s father C.L. was her child’s father, but the boy’s real father was a man named Donald Burk, who Franklin met while they were attending school.

Charles continued: “The gospel people didn’t think that way. The cats liked it with the cats and the chicks liked it with the chicks and no one minded mixing it up this way or that. I got a kick outta seeing how God’s people were going for it hard and heavy every which way. I was just surprised to see how loose they were.”

2Edward Franklin was born when his mother was 14 years old, and she described his father as a “player.”

Just one year after giving birth to her first child, Aretha Franklin became pregnant again with another boy. She named her second son Edward, after his father Edward Jordan, and he was born on January 22, 1957—which, ironically, was his grandfather C.L. Franklin’s birthday. Aretha was just 14 years old when she gave birth to Edward, whose nickname is “Eddie.”

There were rumors that Franklin had an affair with legendary singer Sam Cooke around the time of Edward’s birth, and that he was the child’s actual father, however, there has never been any evidence to support that theory.

Aretha described Eddie’s father, Edward Jordan, as “just some player.” Eddie and Clarence were often looked after by Aretha’s grandmother Rachel and her sister Emma as her recording career took off in the coming years.

Edward inherited his mother’s vocal talents and was able to hit the high notes the same way his mom did. He performed with his mother publicly on several occasions, singing a Christmas duet at one point.

Edward also sang at a memorial service in June 2015 for his grandfather, Rev. C.L. Franklin, and his uncle, Rev. Cecil Franklin, in Detroit. His rendition of “His Eye Is On The Sparrow” reportedly brought the house down and received a standing ovation, leaving many attendees in tears.

Edward was named a suspect in a 2002 arson fire at his mother’s 10,000 square foot mansion in Bloomfield Township, about 25 miles away from Detroit. According to Billboard, traces of accelerants were found in some of the remains of Aretha’s home and on Edward’s clothing, which led investigators to believe he had something to do with the fire.

Further investigation showed that Franklin wasn’t responsible for the place, and his lawyer said the chemical traces on his clothing were simply the result of his contact with materials kept in the house, which was used for storage. After it was discovered that he had nothing to do with the fire, police never charged him with anything.

Eight years later, in 2010, Edward was badly injured in an attack by two men and a woman outside a gas station in Detroit. He underwent surgery while at the hospital, though the details of his injuries weren’t disclosed to the public. When investigators went to the hospital to get a statement from him, he had already checked himself out. Police were told he “walked out on his own.”

Neither Franklin nor his mother made any public comment about the incident, however, Edward’s lawyer, William Mitchell III, said that Eddie was the type of person who needs a lot of “support care—people to get him around from this place to that place,” but didn’t explain exactly what he meant by that. “Mrs. Franklin is very, very, very, very, very protective of him,” Mitchell said, according to the Telegraph.

Aretha Franklin married her first husband Ted White in 1961 when she was 19 years old, and three years later, in February 1964, she gave birth to her third son, Ted “Teddy” White Jr. He, like his older brother Eddie, was also named after his father.

Ted Sr. and Aretha split in 1969 after reports of domestic abuse. Also like his older brother Edward, Ted Jr. is also a singer and performer who has also worked with his mother, playing backup guitar for several of her concerts. He also has a musical career of his own, having released three full albums thus far under the stage name “Teddy Richards.”

Richards has said of his love for music, via MusicPage, “I’ve evolved from a self-taught guitarist into a producer, engineer, and accomplished tunesmith; I truly love music and enjoy the journey that it’s taken me on.”

4Aretha’s youngest son Kecalf Cunningham is a Christian rapper. His father was Franklin’s road manager Ken Cunningham, who she dated for eight years.

Aretha’s youngest son, Kecalf Cunningham, was born on March 28, 1970 as a result of an 8-year relationship with her road manager Ken Cunningham, between 1968 and 1976. His name is an acronym of both Aretha and Ken’s full names—Ken E. Cunningham and Aretha Louise Franklin (K-E-C-A-L-F).

Kecalf is a Christian rapper who, like his older brothers, has also performed with his superstar mother several times on stage, most notably during her 2008 concert at Radio City Music Hall.

Reviewing the performance, The New York Times suggested that Kecalf, who raps under his birth name and stage name “KPoint,” may still have some growing to do as an artist. “[There was] an interlude featuring her son Kecalf Cunningham, a Christian rapper, who came with a backpack, a hoodie and some cheap-sounding recorded tracks,” NYT’s Nate Chinen wrote. “After what felt like ages, it was a relief to have Ms. Franklin return, energies renewed, to belt out ‘Chain of Fools.’”

#QueenOfSoul great photo of #ArethaFranklin and her son Kecalf Cunningham stand under a newly unveiled street sign named in her honor outside Detroit's Music Hall in 2017. source Guralnick/Detroit News via AP pic.twitter.com/9VHiXK5JfQ

In 2017, Kecalf accompanied his mother at the unveiling of Aretha Franklin Way, a street renamed in her honor, which, according to the Detroit News, is located near Madison Street and Comerica Park, where the Detroit Tigers baseball team plays.

Franklin was also reportedly her son’s business manager when he started his music career. Vulture described him as the “Shaquille O’Neal” of Christian rap, saying that he has been “allotted rap resources for reasons other than rap aptitude.”

Kecalf’s daughter, Victorie Franklin, is also a singer and songwriter. She performed a tribute to her grandmother at the BET Honors ceremony in 2004, singing Tamela Mann’s “Take Me to the King.” Victorie, a rising Howard University rising sophomore, has also performed at family functions, including her grandmother’s Christmas party in 2016.

It was reported that Aretha was giving Victorie “one-on-one vocal coaching and she thinks Victorie has a rather bright future and a big career ahead of her.” Speaking about her granddaughter, Aretha said: “She’s coming along very well. I came down to see her rehearse, and she brought tears to my eyes.”

Kecalf’s son, Jordan Franklin, is a music producer, whose clients include Ariana Grande.

5Aretha Franklin encouraged all of her children to pursue their musical interests.

In a 1995 interview with Katz Tapes, Franklin spoke about her sons and their love of music. “My youngest son, Kecalf is a hip-hopper and a rapper,” she explained. “And my other son, Teddy, plays guitar. He plays in my band and he’s been doing some things lately with some musicians over in London. He sings, too, and he’s looking for his own record deal.”

Franklin said that while Edward and Clarence weren’t as interested in music as Kecalf and Ted, she would want them all to appear on a family album if they were open to it. Franklin said in a 2012 interview with the Today Show that she made sure to prepare her boys for show business. “I think parents have to really talk to their children before they leave home,” she said, “[so they] leave home prepared, really.”

In 2015, Franklin talked with CNN about how difficult it was raising sons in the modern day. “My sons grew up pretty much the same way I did,” she said. “Today, it’s different. Most mothers in the African American community are very concerned about their children and talking to them about how to conduct themselves.”