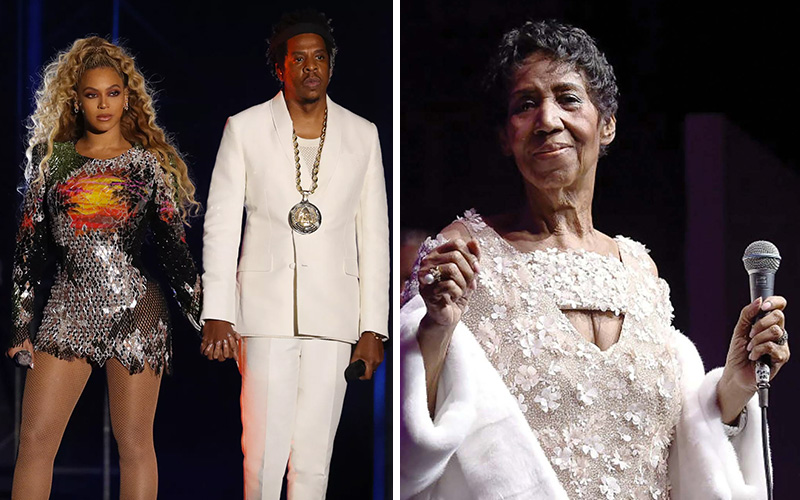 On Monday night (Aug. 13), after reports emerged saying that Aretha Franklin was “gravely ill” and living her last days, Beyoncé and JAY-Z dedicated their “On The Run II Tour” concert in Franklin’s hometown of Detroit to the Queen of Soul.

After performing their first song, “Holy Grail,” at Ford Field, Beyoncé told the cheering crowd “This show tonight is dedicated to Aretha Franklin.” Queen Bey added, “We love you and thank you for changing all of our lives with beautiful music.”

DJ Khaled, who served as the opening act of Monday’s show, got the crowd excited when he played one of Franklin’s biggest hits, “Respect.” After playing the song, Khaled shouted: “Make some noise for Aretha Franklin” as the audience cheered.

DJ Khaled tribute to Aretha Franklin before exiting the stage on a bird scooter pic.twitter.com/w5WRDAN5GE

The touching dedications came just hours after news broke that the iconic singer was dying of cancer.

CNN reported late Monday that Franklin is in hospice care, and Detroit news anchor Evrod Cassimy, who has been in touch with the R&B/Soul legend’s loved ones said she was being “surrounded by friends and family” and “asking for your prayers at this time.”

Stevie Wonder and Jesse Jackson are among the singer’s friends who have visited Franklin at her home in Detroit over the last few days, according to her publicist Gwendolyn Quinn. Mariah Carey tweeted that she was “praying for the Queen of Soul,” as did Ciara and Missy Elliott.

Praying for the Queen of Soul ?? #ArethaFranklin pic.twitter.com/5cfNPrQrq3

Praying for Aretha Franklin and her family right now! ????

My prayers are with Aretha Franklin & her family during this difficult time ?? LOOK BELOW @ what I tweeted at the top of the year we MUST CELEBRATE the Living Legends while they are here to see it. So many have given us decades of Timeless music…?? https://t.co/VVacLxcMSI