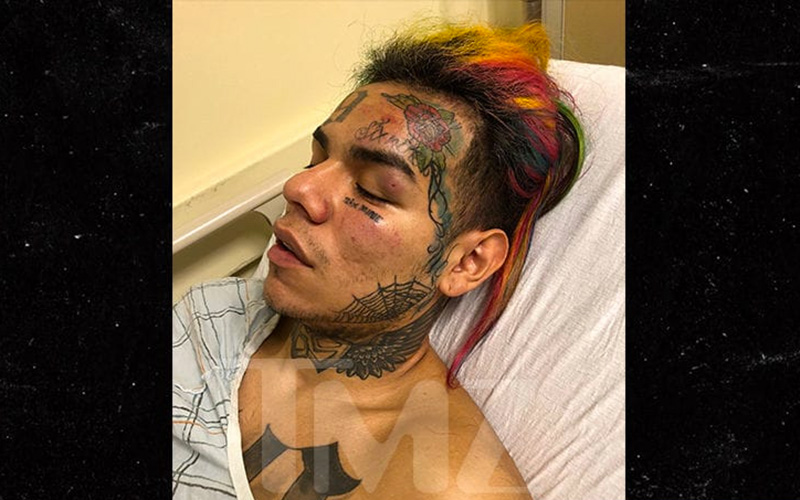 Sources close to Tekashi 6ix9ine say that the controversial rapper is in the hospital after being kidnapped, pistol-whipped and robbed at gunpoint.

According to a highly questionable report from TMZ, Tekashi 69 was shooting a music video in Brooklyn, New York early Sunday morning (Jul. 22). The shoot wrapped around 4 a.m. and he drove home. When he got to his house, another car pulled up and blocked his driveway so that he couldn’t leave. That’s when all hell broke loose.

TMZ’s sources say three hooded gunmen hopped out of their vehicle, grabbed Tekashi and pistol-whipped him, which knocked him unconscious. When 69 woke up, he found himself in the back seat of the car as the gunmen were driving around, telling him if he didn’t hand over his jewelry and money, they would kill him right then and there.

A short time later, the gunmen pulled back up to Teksahi’s home and two of them went inside as the third man kept watch outside with Tekashi in the car. The gunmen made off with around $750,000 in jewelry and between $15,000 and $20,000 in cash, according to TMZ. 6ix9ine’s baby mama and young daughter were reportedly inside the house while all of this was happening, but were not hurt, TMZ reported.

As the assailants drove away with Tekashi still in the back seat, he was somehow able to open the back door and jumped out. One of the gunmen chased him down the street but gave up after some time out of fear of being identified. Tekashi then hopped into the passenger seat of a passerby’s vehicle and begged for help. The good Samaritan called the police and then asked 6ix9ine to get out of the car.

An ambulance then took Tekashi to a hospital, where doctors performed various tests, including a CT scan. The rapper sent TMZ a picture of him lying in a hospital bed for “proof.”

Tekashi’s alleged kidnapping incident comes after a number of provocative statements from the rapper, who has pissed off A LOT of people, to say the least. Whether the three hooded gunmen were acting in response to something he said, or simply for the money, remains to be seen. The report comes a little over a month after rapper XXXTentacion was killed over $50,000.

For what it’s worth, who knows if this really happened or if this is just another publicity stunt from the controversial rapper, who just released a new song with Nicki Minaj called “FEFE.”

If this really did happen, hopefully, Tekashi 6ix9ine has learned his lesson in regards to writing checks with his mouth his a$$ obviously can’t cash.