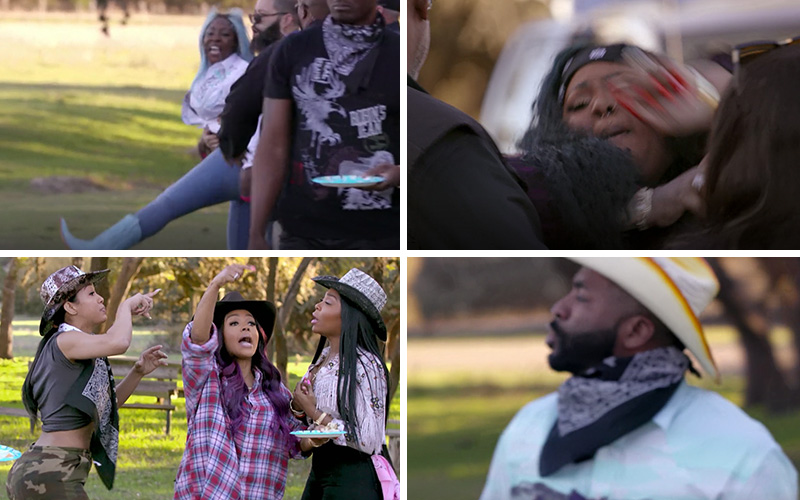 If you thought Tokyo Vanity and Spice’s purse-throwing brunch brawl on last week’s episode of Love & Hip Hop Atlanta was the last of their beef, you were sadly mistaken.

On this week’s episode, Spice and Tokyo continued their feud with a rousing round two, and this time, damn near everyone else ended up getting into brawls of their own on the side.

It was Tokyo vs. Spice, Estelita vs. Sierra, BK vs. Estelita and so on…

For the past few episodes, Tokyo and Spice have been going at it ever since Tokyo found out her her ex, Tabius, had moved on and was messing around with Spice. Last week, Tokyo (almost) introduced her purse to Spice’s head after Spice kept taunting her about her weight, and this week, the pair ended up sparring again at the dude ranch.

Everyone was sitting down enjoying tacos and burritos when the subject of Rasheeda’s Pressed launch in Houston the night before came up. Spice thanked Rasheeda for the good time, and when Tokyo was trying to explain why she wasn’t there, Spice interjected.

“I don’t have no problems with her but the bitch wanted to keep playing with me!” Tokyo yelled. She could barely even finish her sentence before Spice stood up and tossed her plate at Tokyo, hitting her smack dab in the face. Apparently, Spice doesn’t like being called a “bitch.”

Tokyo tried to go after Spice, but security swooped in and held both of them back as BK rushed over to try and calm Tokyo down. Spice and Tokyo’s fight sparked another battle between Estelita and Sierra when the former accused the latter of flip-flopping between Tokyo and Spice.

Then, when BK Brasco—Sierra’s boyfriend—told Estelita to “chill out” she went off on him: “F**k you and your bitch!” And last, but certainly not least, Spice hopped out the production van (WHILE IT WAS MOVING!) to go for another round, with Estelita not too far behind yer yelling for Sierra: “Where that bish at?! Where that bish at?!”

Damn near the whole LHHATL cast showed out at the dude ranch, y’all. And Joc’s reaction was spot-on: “Boy we had a whole showdown at the O.K. Corral, and I’m looking at the cowboys, they looking like, ‘Man what’s the problem?'” Meanwhile, Sierra just wants to know “What are we fighting for?!”

Who knows, Sierra. Who knows…