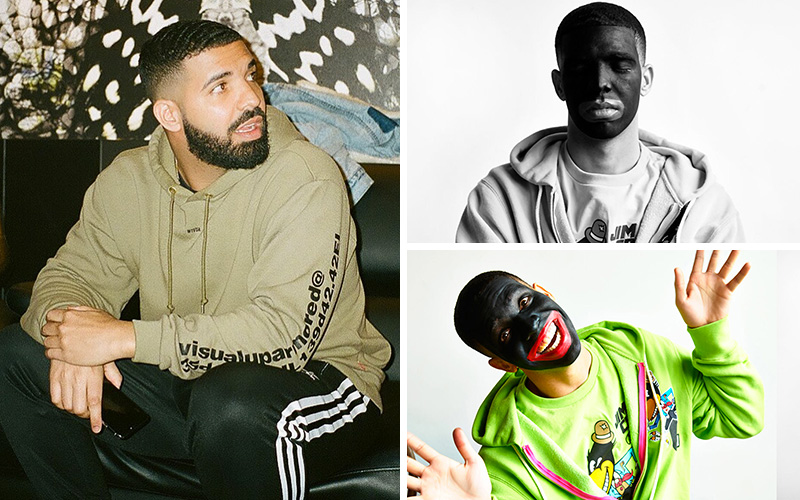 Drake has finally issued a statement regarding those photos of him in blackface.

The pictures, which were taken by photographer David Leyes, have been a major topic of discussion among rap fans on and offline ever since Pusha T used one of them as the cover art for his searing diss track “The Story of Adidon.”

When the song first dropped, naturally, most people thought the image was photoshopped until Pusha jumped on Twitter to let us all know it was 100% real.

The initial response to the photos came from David Leyes, who swiftly got them removed from Pusha T’s Instagram account. Leyes, a professional photographer from Drake’s hometown of Toronto, said the photos were actually Drake’s idea. He can be seen in the comments section of an Instagram post explaining the backstory: “I captured [Drake’s] idea… I’m proud to be a part of a strong statement made by a black man about the f**ked up culture he is living in.”

Now, after more than 24 hours, Drake has taken to Instagram himself to explain why he took the photos and the context behind them.

“I know everyone is enjoying the circus but I want to clarify this image in question,” Drizzy wrote. “This is was not from a clothing brand shoot or my music career. This picture is from 2007, a time in my life where I was an actor and I was working on a project that was about young black actors struggling to get roles, being stereotyped and type cast. The photos represented how African Americans were once wrongfully portrayed in entertainment.”

He continued, “Me and my best friend at the time Mazin Elsadig who is also an actor from Sudan were attempting to use our [voices] to bring awareness to the issues we dealt with all the time as black actors at auditions. This was to highlight and raise our frustrations with not always getting a fair chance in the industry and to make a point that the struggle for black actors had not changed much.”

Also, for what it’s worth, the founder of Too Black Guys—the clothing line who made the shirt Drake’s wearing in the photos—said they had nothing to do with the blackface photoshoot.

“The photo in question was not from a Too Black Guys photoshoot however it did feature clothing from Too Black Guys’ JIM CROW COUTURE/HOUSE OF CROW collection which was released in 2008,” Adrian Aitcheson told Complex.

“The collection featured several graphics that highlighted the painful and dangerous period of the Jim Crow Era. Too Black Guys has a history of representing the black experience in an unapologetic way,” Aitcheson said. “Although this was not an image from any of our photoshoots, we feel that Drake, who is a long- time friend of the brand, was brilliantly illustrating the hypocrisy of the Jim Crow Era. The subtleties of Drake, a young black man, mimicking how white men used to mimic and dehumanize black people may be lost in a rap battle but we should not be distracted from the issues that are still affecting our communities.”

Now that we have an explanation for the blackface photos, we think it’s time for Drake to explain what’s going on with that alleged son of his and release a respnse to “The Story of Adidon.”