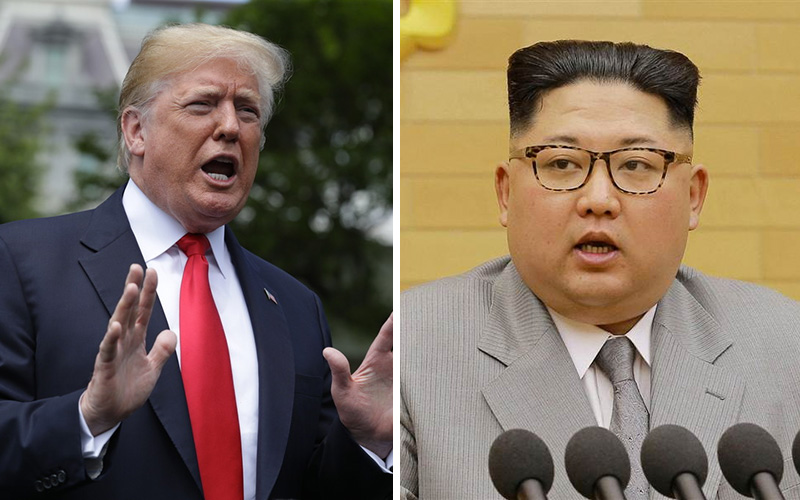 President Donald Trump will not be meeting with Kim Jong Un in June, according to a letter addressed to North Korea’s Supreme Leader from the president. The letter was released by The White House Thursday morning (May 24).

The meeting, which was scheduled for June 12th in Singapore, would have been a historic diplomatic summit between the United States and North Korea, who haven’t been on good terms over the years. In fact, that meeting would have been the first EVER face-to-face meeting between a U.S. and North Korean leader.

However, Trump says that he feels that it would be “inappropriate” to have this “long-planned meeting” due to the “tremendous anger and open hostility displayed in your most recent statement.”

The most “most recent statement” Trump is referring to came from North Korean’s vice minister of foreign affairs, Choe Son Hui, who called Vice President Mike Wednesday a “political dummy” on Wednesday.

“You talk about nuclear capabilities, but ours are so massive and powerful that I pray to God they will never have to be used,” President Trump said in his letter.

Pyongyang had threatened to pull out of next month’s summit with the U.S., citing the “unbridled and impudent remarks” of “political dummy” Mike Pence, who said that North Korea might end up “like Libya” if Kim Jong Un “doesn’t make a deal.” Pence’s statement was a clear reference to Libyan leader Muammar Gaddafi, who was beaten and killed after being chased down by rebel soldiers in 2011—eight years following his decision to denuclearize after negotiations with the U.S.

Choe said that North Korea has no interest in meeting the same “tragic fate” as Libya. “As a person involved in the U.S. affairs, I cannot suppress my surprise at such ignorant and stupid remarks gushing out from the mouth of the U.S. vice president,” Choe said, according to a translation from Wall Street Journal reporter Jonathan Cheng.

“In case the U.S. offends against our goodwill and clings to unlawful and outrageous acts, I will put forward a suggestion to our supreme leadership for reconsidering the [Kim-Trump] summit,” Choe added, saying that it was up to the U.S. to decide whether it wanted ot negotiate in a “meeting room or encounter us [in a] unclear-to-nuclear showdown.”

KCNA: "Choe Son Hui, vice-minister of Foreign Affairs of the DPRK, issued the following press statement on Thursday: At an interview with Fox News on May 21, the U.S. Vice-President Pence has made unbridled and impudent remarks that north Korea might end like Libya…and so on."

KCNA: "As a person involved in the U.S. affairs, I cannot suppress my surprise at such ignorant and stupid remarks gushing out from the mouth of the U.S. vice-president."

KCNA: "If he is vice-president of 'single superpower' as is in name, it will be proper for him to know even a little bit about the current state of global affairs and to sense to a certain degree the trends in dialogue and the climate of detente."

KCNA: "We could surmise more than enough what a political dummy he is as he is trying to compare the DPRK, a nuclear weapon state, to Libya that had simply installed a few items of equipment and fiddled around with them."

KCNA: "Soon after the White House National Security Adviser Bolton made the reckless remarks, Vice-President Pence has again spat out nonsense that the DPRK would follow in Libya's footstep."

KCNA: "In view of the remarks of the U.S. high-ranking politicians who have not yet woken up to this stark reality and compare the DPRK to Libya that met a tragic fate, I come to think that they know too little about us."

KCNA: "To borrow their words, we can also make the U.S. taste an appalling tragedy it has neither experienced nor even imagined up to now."

KCNA: "It is the U.S. who has asked for dialogue, but now it is misleading the public opinion as if we have invited them to sit with us. I only wonder what is the ulterior motive behind its move and what is it the U.S. has calculated to gain from that."

KCNA: "We will neither beg the U.S. for dialogue nor take the trouble to persuade them if they do not want to sit together with us. Whether the U.S. will meet us at a meeting room or encounter us at nuclear-to-nuclear showdown is entirely dependent upon the decision…of the U.S."

KCNA: "In case the U.S. offends against our goodwill and clings to unlawful and outrageous acts, I will put forward a suggestion to our supreme leadership for reconsidering the DPRK-U.S. summit."

But it looks like Trump beat North Korea to the punch by canceling the meeting himself. Read his full letter to North Korea below:

We greatly appreciate your time, patience, and effort with respect to our recent negotiations and discussions relative to a summit long sought by both parties, which was scheduled to take place on June 12 in Singapore. We were informed that the meeting was requested by North Korea, but that to us is totally irrelevant. I was very much looking forward to being there with you. Sadly, based on the tremendous anger and open hostility displayed in your most recent statement, I feel it is inappropriate, at this time, to have this long-planned meeting. Therefore, please let this letter serve to represent that the Singapore summit, for the good of both parties, but to the detriment of the world, will not take place. You talk about nuclear capabilities, but ours are so massive and powerful that I pray to God they will never have to be used.

I felt a wonderful dialogue was building up between you and me, and ultimately, it is only that dialogue that matters. Some day, I look very much forward to meeting you. In the meantime, I want to thank you for the release of the hostages who are now home with their families. That was a beautiful gesture and was very much appreciated.

If you change your mind having to do with this most important summit, please do not hesitate to call me or write. The world, and North Korea in particular, has lost a great opportunity for lasting peace and great prosperity and wealth. This missed opportunity is a truly sad moment in history.