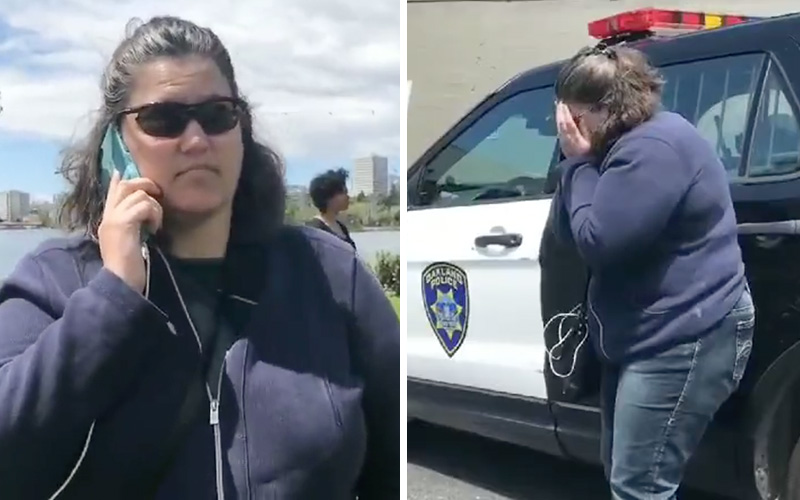 Damn, can black people do anything enjoyable without some melanin-deficient person with too much time on their hands calling the police?!

A white woman who called the cops on a black family last month at a park in Oakland, California while they were setting up a BBQ grill has gone viral on social media.

According to the woman, their crime was grilling using a charcoal grill instead of a “non-charcoal” grill in one of the park’s designated barbecue zones.

The incident, which occurred on April 29th at Lake Merritt in Oakland, was filmed by a witness named Michelle Snider, who confronted the woman for calling the police on the family. Police responded to the incident, but didn’t issue any citations, according to Oakland officials, though the family was detained and questioned for an entire hour.

“In a city that needs significant policing services, we can’t have those precious expensive resources squandered in a frivolous way,” Oakland Councilmember Lynette Gibson McElhaney said in a statement to The Huffington Post. “Police are not private security for any white person that’s offended by the presence of black folks in our public spaces,” she added.

Snider’s video of the confrontation with the white woman went viral last Thursday after a San Francisco news station aired a segment on it. “This is exactly what is the problem with Oakland today. This lady wants to sit here and call the police on them for having a barbecue at the lake as if this is not normal,” Snider said.

A passerby named Angela Williams, who witnessed the confrontation, told the San Francisco Chronicle said she saw the white woman arguing with a black man about his grill being “illegal” as he was setting it up for a cookout with his family and friends.

Williams, who found out the man was named Onsayo Abram, tweeted about the incident and shared photos of the woman harassing the man “about bbq’ing on the lake … where everyone BBQs.”

So today I’m at Lake Merritt and minding my Black ass business. As I finish my jog (Let’s be real, fast walk) I notice this white woman being really aggressive towards the Black Guy. I’m nosey so I stop to observe.

Turns out, she is harassing him about bbq’ing on the lake….where everyone bbqs. pic.twitter.com/GooQfDcJ1j

“I proceed to tell her, ‘Hey, there’s not a posted sign. I believe I’m in the correct area. Go on about your day and leave me alone,’” Abram told the newspaper. “So she said, ‘No, I’m not gonna leave you alone. I’m gonna need you to shut this down, or I’m gonna call the police.’”

According to the Oakland city website, Lake Merritt has six designated barbecue zones set up. Three of the zones permit charcoal grills, and the other three are designated for “non-charcoal portable grills.” Apparently, the family had a charcoal grill in the “non-charcoal zone,” but that’s honestly beside the point, because other than this crazy white lady’s feelings, it’s not like anything was harmed in the process.

Williams told HuffPost she witnessed the white woman waiting near the barbecue after confronting Abram, so she tried to intervene to defuse the tension.

“She was just close enough to be uncomfortable but far away that she wasn’t in their physical space,” she told HuffPost. “I made some innocuous conversation so she would walk away because she had a very aggressive tone,” said Williams, who described the woman as not only “aggressive,” but “curt” and “non-friendly.”

Not too long afterward, Snider, who was there for the barbecue with her husband Kenzie Smith, confronted the white woman and recorded the exchange. “Why are you so bent out of shape over them being here?” Snider asked the white woman. The white woman replied, “Because it causes extra money from our city to do things when children get injured because of improperly disposed coals.”

“I’ve seen people barbecue with charcoal for years, and I’ve never known it to be a distraction or a problem,” Abram told San Francisco’s KRON4.

“When you engage law enforcement in these kinds of things you are opening the door for things to go very wrong,” said Oakland mayoral candidate Cat Brooks, “the potential for arrests like in Philadelphia with those two black men, or worse, physical assault or death, and I don’t believe in this day and age that white folks don’t know that.”

Thankfully, the only thing injured in this situation was the woman’s feelings, because she shed all kinds of white tears when she felt she was being harassed over the situation.

At one point, near the end of Snider’s full nearly 25-minute video of the incident, the woman broke into tears as the woman followed her while she was walking to meet police at a nearby convenience store. Apparently, the white woman had snatched a card with Snider’s information and refused to give it back after repeated asks from Snider to return it.

“Leave me alone!” the triggered white woman yelled as she tried to portray herself as a victim. “I’m being harassed,” the white woman told police, while shedding a bunch of fake white tears, holding her knees and palming her face, as if she was in an unbearable amount of distress (Ed. Note: GIRL, BYE!!!)

The white woman then told an officer her side of the story, saying that she was so bothered by a black family using a charcoal grill at a park. Honestly, believe it or not, the cop looked like he wanted to laugh in her face the entire time.

Kenzie Smith told KRON4 that he and his family have been having barbecues in that park for decades, and it’s normal for people to barbecue there with charcoal grills.

“She said that we were trespassing, we were not welcome, and then she turned back around and said, ‘Y’all going to jail,’” Smith said.

Williams (the hero videographer) said she stayed on the scene to observe the situation so she could provide the police an eyewitness account, if needed.

“I approached because, one, Onsayo was alone; two, this white woman was being aggressive with him … and three, I felt that if the police came, then facts could be misconstrued,” she told HuffPost. “I do believe the woman unfairly targeted them,” Williams added. “Others on the lake were grilling and it’s a common occurrence.”

According to the Chronicle, police eventually took reports from both parties, who each claimed they were being harassed by the other, though the white lady played the “victim” role much better.

Of course, the viral hashtag #CookingOutWhileBlack has inspired countless memes and social media reactions from the chill-less section of Twitter we’ve all know as “Black Twitter,” and honestly, this crazy white lady—who obviously has nothing better to do with her time—deserves every bit of scrutiny that comes towards her way.