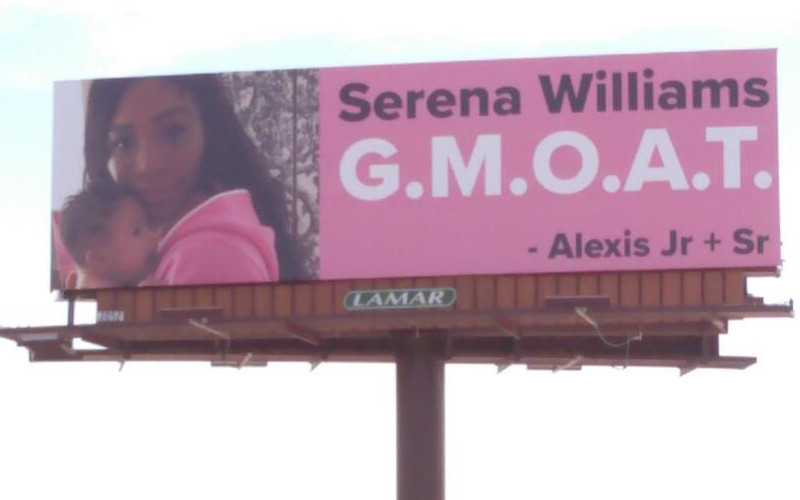 Serena Williams is returning to tennis with the greatest love and support anyone could ask for. The tennis champ’s husband has designed a series of billboards naming her the “Greatest Momma of All Time.”

Serena will soon compete at the BNP Paribas Open in Indian Wells, but as she drives to the tournament, she will be greeted with four billboards made just for her. Each billboard features a unique word and photos of Serena and her daughter, Alexis Olympia, that ultimately reads “G.M.O.A.T.”

These just went up on alongside I-10 into Palm Springs. @OlympiaOhanian & I wanted to welcome her back to tennis. Designed them myself, with some help from Jr.#GMOAT pic.twitter.com/zRcMmxhgB5

Serena’s husband, Reddit co-founder Alexis Ohanian, designed the billboard himself with AdQuick, a business he invests in through his company, Initialized Capital.

“Literally am crying,” Serena wrote on her husband’s Instagram after she saw the heartwarming surprise. “This is so sweet. I love you.”

The Paribas Open be will Serena’s first singles tournament since giving birth five months ago. She played an exhibition match in December and returned to competitive tennis in January. Losing both matches, she opted to withdraw from the 2018 Australian Open (which she won last year while pregnant).

However, I’m sure seeing the four billboards will give the “G.M.O.A.T.” extra motivation to win the Indian Wells trophy and maintain her GOAT status in tennis.