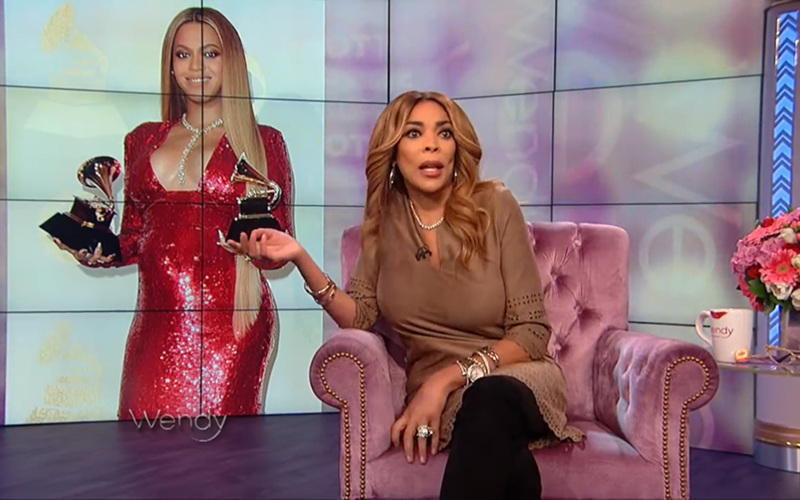 Though Wendy Williams is no longer feeling “flu-ish,” the talk show host now has to treat a bunch of bee stings. The BeyHive is swarming Williams after saying Beyoncé needs autotune in order to sing live.

On today’s show (Feb. 20), Williams was discussing the backlash Fergie has received following her tragic rendition of the National Anthem at the NBA All-Star Game. The messy host said Fergie can’t “raw dog” a performance and needs autotune to sound decent.

She went on to name others she believes can’t sing live without assistance, including Queen Bey.

Williams’ audience had a lukewarm reaction to her autotune comments until Beyoncé’s name was mentioned. The audience gasped and was definitely hesitant to agree with the host. Williams immediately tried to win them back by lauding the live talents of Aretha Franklin, Mariah Carey, and Adele.

Nonetheless, the bee’s nest was poked and Williams became a trending Twitter topic as Beyoncé stans attacked her for the shady and untrue statement. Fans shared clips of Beyoncé’s flawless acoustic live vocals, while also throwing the shade back at Williams.

The Beyhive coming after Wendy Williams after she said Beyoncé needs autotune pic.twitter.com/TiU6hLS0pb

.@WendyWilliams the crack permanently gone to your brain sis?

I don’t agree with @WendyWilliams. Beyonce can sing. I’m not apart of the Beyhive but I’ve heard her sing a cappella and she sounded amazing

Now Wendy Williams will think Beyonce did her wrong if she told her she was shaped like Bookman from good times when she was younger pic.twitter.com/TZSqpZ7rjP

Somebody said if Wendy Williams could stop focusing on Beyoncé and start focusing on the mistress her husband sleeping around with. pic.twitter.com/y6pdBzkLuM

excuse me @WendyWilliams what did you smoke for breakfast?
you gotta be out of your mind to put Fergie, JLO and Beyoncé in the same category when it comes vocals. you need serious help sis. I mean seriously..?
You're cancelled #WendyWilliamsOverParty pic.twitter.com/GBeth1IyXM

Beyoncé when she heard that Wendy Williams said that she needed auto tunes…. pic.twitter.com/f2j1XlcT3k

This isn’t the first time Williams has tried to come for Beyoncé, even questioning her intelligence and stating the Houston native speaks like she has a “fifth grade education.”

Despite being dragged by the BeyHive every time, Williams keeps throwing jabs. So, don’t expect this to be the last time Williams has something shady to say about Queen Bey.