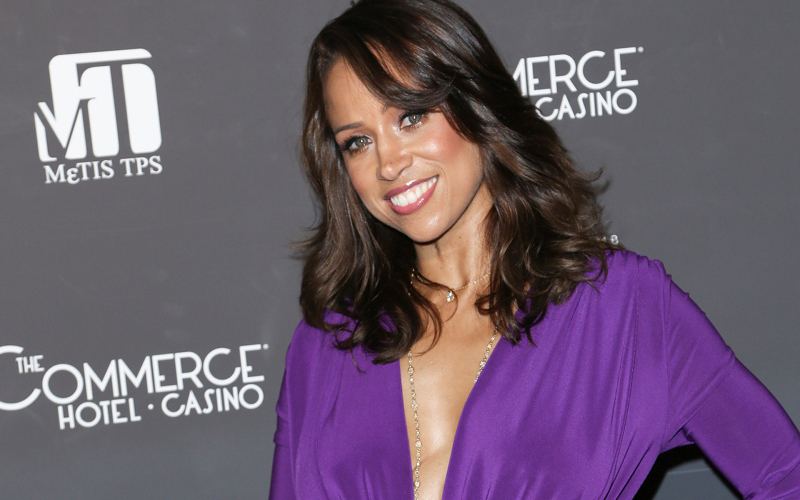 Oprah may not be running for president, but there is one black Hollywood “starlet” who’s interested in becoming an elected politician: Stacey Dash.

Even though I know you wanna laugh, the problematic black Republican is actually serious.

A number of people online and off have suggested I run for political office. I wanted to see what my online community thinks of this idea as I mull the possibilities. Thoughts? pic.twitter.com/L71fF0NnXR

Claiming a “number of people” have suggested she run for political office, Dash took to Twitter last week (Feb. 9) to announce she’s mulling the idea of running for Congress in her home state of California. She asked her 564K followers their thoughts and even included a mock political button to seem legit—“Dash to D.C.” or D2DC.

In response to numerous calls for me to run for office, I am considering a run for Congress. Would love to know what my fans and friends think. pic.twitter.com/e9z8MuFu5m

The fired Fox News contributor then responded to a few concerns that may come up during her potential campaign, such as having any skeletons in her closet.

“Everything I am is in my book and public,” Dash wrote, referring to her 2016 memoir. “Nothing they [say] can hurt me with that they haven’t thrown at me already.”

Everything I am is in my book and public. Nothing they can hurt me with that they haven’t thrown at me already.

Another user reminded Dash of her 2006 nude Playboy photo shoot. Dash wrote that her kids encouraged her to do Playboy after discussing the opportunity: “If they didn’t have an issue with it, neither should anyone else. #NoShame.”

My response: I conferred with my children when offered. They told me “go for it mom.” If they didn’t have an issue with it, neither should anyone else. #NoShame

I doubt anyone is really pushing for Stacey Dash to run for Congress, but even so, she thanked her fans for their support in a short Twitter video on Tuesday (Feb. 13).

“Thank you for all your comments. Now, I have to make a choice. [I’m] praying about it and putting it in God’s hands.”

Thank you to everyone who got back to me on my political office question. A personal thank you for your kindness. #d2dc #runstaceyrun #thankyou pic.twitter.com/g5ZRVRaxRw

Dash, a Donald Trump supporter, has faced heavy backlash with her problematic and controversial political stances in recent years. She said the Democratic Party has as “plantation mentality,” suggested transgender people use the bathroom “in the bushes,” and believes we should get rid of Black History Month and BET.

And, of course, she’s part of the “all lives matter” crowd when it comes to the Black Lives Matter movement.

Needless to say, Twitter made it crystal clear that we don’t want to see the Clueless star in politics:

No disrespect… but what makes you qualified to be a congresswoman? What experience do you have in politics? #NoShade

I am a used to be fan of yours. Based on the things I have heard you say in the news, the answer is simply NO.

Whomever these people are who told suggested you have anything to do with politics, they do not want to see you prosper. They aren’t for you

Dash is not backing down. Her latest political comments are in regards to the Parkland, Florida school shooting that killed 17 people. Dash shared her thoughts on how to address and fix the mass shooting issue in the country in a lengthy Twitter thread on Thursday (Feb. 15).

There is no one answer for what happened in Florida or what’s happened over the last 45 days or what is happening & sadly will happen again. Gun accountability is needed. https://t.co/7KRMI3JXT1

This is a multilayered, complicated issue interconnected with a number of problems. Thoughts and prayers won’t stop it. One size fits all legislation won’t stop it and it transcends politics. This is a societal issue and like a disease needs in depth diagnosis and treatment.

This is not to be solved online in tweets, posts or the like. This needs federal examination and yet it need some type of national, cultural discourse outside of the federal government that can’t even address its own issues and get simple reforms passed.

We, as people of all colors, faiths and economic backgrounds need to put aside politics, examine our lives, our culture, our media, our entertainment and our environment as a whole thing to see where the cancer is. It’s there. It’s growing. I wish I could lay hands and cure it.