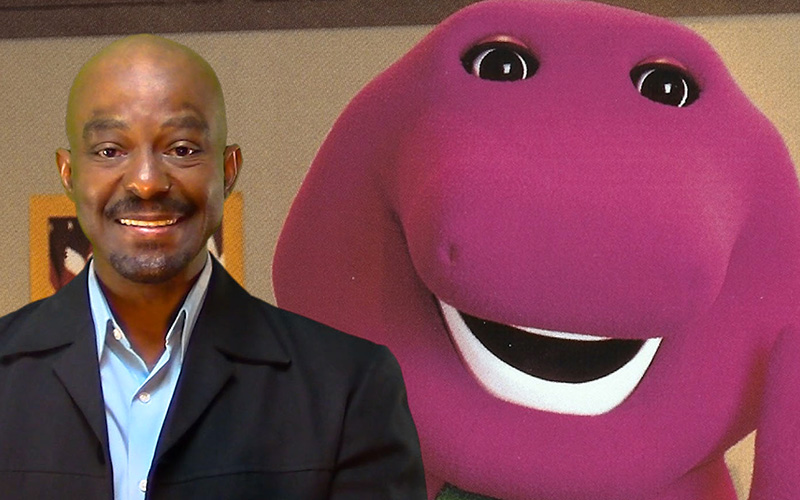 The name David Joyner may not ring any bells, but the popular children’s TV character he played for over a decade sure will.

Joyner, who played Barney from 1991 to 2001 (FYI: Joyner dressed up in the costume and was responsible for Barney’s physical motions, while actor Bob West provided the voice), recently sat down with VICE for an interview, in which he revealed that he pays his bills these days by working as a “tantra massage specialist and spiritual healer.”

After Joyner left “Barney & Friends” in 2001, he moved to Los Angeles, where he continued to act. He’s appeared on popular TV shows like “Shameless,” “That 70’s Show,” “24” and “The Young and the Restless.” According to Vice, he also graduated from ITT Technical Institute and worked as a software analyst for Texas Instruments.

Joyner, now 54, exclusively works with about 30 female clients he calls “goddesses” with the goal of fully releasing a woman’s “blocked energy.” A full session—which includes a ritual bath, chakra balancing and a massage that ends with “mind-blowing orgasms”—lasts between three and four hours and costs $350.

“When the lingam [penis] and the yoni [vagina] meet, there’s a certain energy that takes place that hands on the body alone cannot create,” Joyner, who focuses on about two to four women per week, told Vice. “Even through G-spot massage, it’s still not the same energy that flows.”

While Joyner’s new occupation seems like a far cry from anything we expected to hear about the man who once played Barney, Joyner says becoming a tantric sexual healer was a natural transition for him. In fact, Joyner says his tantric training came in handy when he would have to be in the 70 pound Barney costume, which could reach temperatures up to 120 degrees at times.

“A lot of the elements of Barney were a lot of the things I was training within tantra,” he explained. “I always said it was never an accident, and that I was meant to do this character. The energy I brought up [while] in the costume is based on the foundation of tantra, which is love. Everything stems, grows, and evolves from love. Even when you have emotionally blocked energy, the best way to remove it is to remove it with love, and then replace it with God’s divine love. Love heals and allows you to continue to grow.”

This takes the “I love you, you love me” song to a whole ‘nother level, right?

Joyner added, “Before I got into the [Barney] costume, I would pray and ask God to allow his loving divine spirit to flow through me through the costume and let that draw the kids. That energy would always draw them in. Children are more connected spiritually than [adults]. A lot of times when I see infants and I’m out and about at the grocery store or whatever, they start staring at me. I make the joke, ‘You know who I am.’”

The mission statement on his website tantraharmony.com states: “Connecting your mind, body and spirit together as one, in perfect harmony. Achieving a higher and more blissful state of awareness to your sexuality, and who you are as a spiritual being.”

Joyner says he doesn’t use condoms with his clients because they “block the energy,” though he routinely provides his STD test results to prospective clients, who are also asked to disclose any STDs in a signed consent form before their first session. According to other tantra coaches, however, these methods are highly unorthodox.

Kaya Kwan Yin, a tantra life coach with more than 100 hours of training who works primarily with male clients, says the idea that condoms could “block energy” sounds “shady” and “ridiculous.” She told Vice, “Tantric sex can happen with your clothes on. What typically looks like penis and vagina penetration is often referred to as ‘full union’ in contemporary practice. Sexual energy penetrates clothes, condoms, countries, and beyond. Having sex with clients in the world of tantra is more of an anomaly than the norm.”

Joyner, however, doesn’t share that belief with Yin. “Once the lingam is inside the yoni, there’s a technique where you don’t even move,” he said. “You’re harmonizing spiritually and consciously, as you’re looking into each other’s eyes, and you’re feeling each other’s energy take place. This is about energy moving up,” which he says goes beyond the realm of physical sex and into spiritual sex. “A lot of women have never really had spiritual sex,” Joyner said.

For those unfamiliar with tantra, Matthias Rose, a certified tantra educator with the Source School of Tantra and founder of the Moksha Tantra Center in Seattle, describes it as “a spiritual science of consciousness. Its goal is to liberate us from the unconscious programming that keeps us from recognizing the divinity in ourselves and all beings.” He added, “If there is corruption, it came about in the marketing of books, videos, and ultimately escort services that all began to use the word tantra as a shorthand for ‘mindful sexuality.’ Sex sells, so… there you have it.”

Rose says he “strongly” disagrees with Joyner’s method of tantra sex therapy. “I can’t say there’s never a place for intercourse; it’s part of the tantric toolset, but in a client/practitioner relationship, it’s almost always never needed—particularly for healing purposes.”

Whatever Joyner is doing, his clients seem to be enjoying it.

Joyner began his current practice in 2004, and finds clients any number of ways, from word of mouth to converting women he’s met on Tinder into believers. He sees clients in their homes all over LA, from Brentwood to Long Beach to deep in the Valley—and even out of state. His website contains several “Goddess Testimonials,” each more breathless than the last in its effusive praise of Joyner and the benefits of sessions with him. Joyner says that before or during his initial consultation with a client, if he feels they’re not ready for, or can’t handle the spiritual experience—or are simply looking for a physical release—he will not take them on.

One client, Lisa, 50, who like Joyner’s other clients preferred to use a pseudonym to maintain privacy, said by phone that she found Joyner through Tinder. She had intercourse with him around the third session and described it as a “spiritual awakening.” She’s now been a client for three years. She says it took her a few sessions before she was comfortable enough with Joyner to have intercourse. “It wasn’t as if I felt like I had to have a full session to get there, but then again it was like, maybe I do,” she says. Lisa has also occasionally insisted that Joyner wear a condom when they have sex.

Another client, Indigo, 53, works as a nurse. She spends her life caring for others, she told VICE by phone, and considers her sessions with Joyner time to focus on herself. “I didn’t go all the way the first time, because he could feel my hesitation,” she says. “But after the first few sessions, I started to really let go.”

None of the three clients VICE spoke to, provided through Joyner, say they felt pressured or coerced into sex with Joyner, who also vehemently denies anything of the sort. Joyner has no claims filed against him for sexual harassment or coercion for sex in Los Angeles, according to a statement provided to VICE by the Los Angeles Police Department.

Now, you might be thinking, “This sounds like prostitution, and it can’t be legal, right?” In the state of California, massage with the intent of arousal is considered solicitation. So to protect himself, Joyner consulted with a police officer friend to help him write a contract that all of his potential clients are required to sign stating that they’re not law enforcement or part of a sting operation. Because the first session is free, the lack of money being exchanged constitutes legal consent, which, he contends, is his legal loophole.

But, according to California defense attorney Jonathan Kelman, the fact that Joyner charges for subsequent sessions means that if a client happened to complain to authorities, he could be charged with prostitution, if said session included intercourse or massage with the intent of arousal. “You can’t legally have sex with someone in exchange for money,” Kelman says. “If I have a client who gets arrested for exchanging a Big Mac for sex, that’s, by definition, prostitution.”

Joyner, however, is adamant that his practice is fully compliant with California law. “Not all of my sessions have sex or ‘spiritual intimacy.’ It’s only in the full sessions when someone is ready to take the sexual energy to a higher level,” he said. “Because then it’s about understanding that when the lingam and the yoni connect there’s a spiritual exchange that takes place, not physical pleasure. It’s not about sex or trying to coerce someone into having sex. It’s about removing emotionally blocked energy.”

Stephen White, the head writer of “Barney & Friends” from 1992 to 2005, told Vice he thought tantra sex therapy was an “interesting transition” for Joyner’s career, but added that he knew Joyner was a “very spiritual guy.”

White said, “When I found out the detail of what’s involved in tantra, I was surprised. I thought it was an interesting transition for Barney. It’s kind of still the ‘I love you, you love me’ deal, but different. I don’t judge or anything, but that’s a side of David I didn’t know.”

If after reading this you feel as though your childhood has been ruined because Barney is now having unprotected tantric sex with dozens of women who he considers “clients,” you’re probably not alone. However, Joyner has clearly moved on from his past as a children’s TV show character.

“Barney was beautiful. Barney was very, very good to me,” he said in an interview with Business Insider last year. “I loved being Barney. I loved everything about being Barney. But that chapter is gone.”