GOSSIPONTHIS.COM Celebs Floyd Mayweather Dismisses #MeToo Movement to Brag About His Wealth: When Somebody... 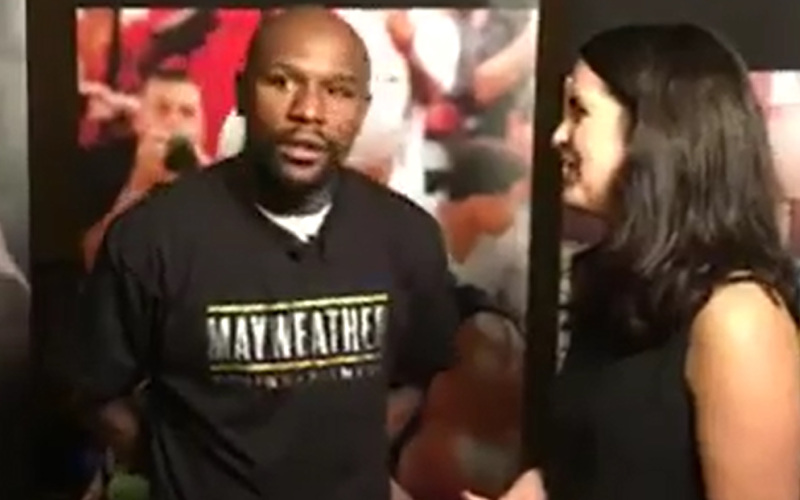 Anyone who is unaware of the #MeToo movement empowering women across the country to speak out against sexual harassment is either incredibly ignorant or grossly misogynistic. In Floyd Mayweather’s case, he’s probably both.

The boxing legend unsurprisingly dismissed the movement by bragging about his personal wealth during an interview with Men’s Health while at the 2018 Consumer Electronics Show in Las Vegas to promote his virtual reality boxing workout experience.

“The who?” a confused Mayweather asked when a female interviewer asked him how men “can grow in 2018” in light of the #MeToo movement. She attempted to explain the movement until he interrupted her to brag about his private jets and expensive cars.

Mayweather’s ignorance didn’t stop there, either. The interviewer once again tried to interject, but he admitted he wasn’t aware of the #MeToo cause and went on to flaunt his billion-dollar earnings.

Expressing little solidarity and dismissing women’s fight against sexual harassment shouldn’t be too surprising coming from a man who has a long history of domestic violence, including spending 90 days in jail for domestic battery in 2012.

Floyd Mayweather is a convicted abuser. Asking him to comment on #metoo is… I don't have the words. The idea of it makes me physically ill though.

Reason #874362 why Floyd Mayweather is an asshole….this deplorable exchange when he was asked about #MeToo pic.twitter.com/i0iEf8ntMm

Least surprising headline of the week: "Floyd Mayweather responds to a question about the #MeToo movement by talking about how rich he is."

Somebody: I learned how to read.
Mayweather: #MeToo

Still, the interviewer attempted to appeal to Mayweather’s “sensitive side” when it comes to women being sexually harassed and abused. Though it was a struggle and I think he was still clueless of what the #MeToo movement actually is, Mayweather was eventually able to say that sexual harassment “[isn’t] cool at all.”

“Of course. I mean, you live and you learn. I think everyone, if you’re in an uncomfortable position, you have to pray about it, you know, talk about it, and I think that, you know, sexual harassment, I don’t think it’s cool at all.

In addition to being accused of being misogynistic, Mayweather has also been hot water due to racist and homophobic remarks.