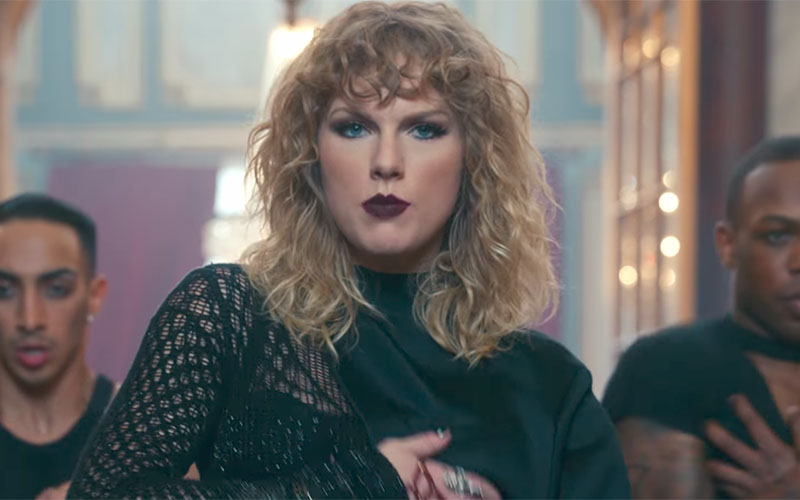 One of the biggest names in pop music (whether we like it or not) is back. This time around, she’s come armed with fiery imagery and snarky putdowns for everyone who is sick and tired of Taylor Swift and her games.

First off, she comes for Kanye and her disgust of his “tilted stage.” She doesn’t cast a Kanye-lookalike in the video, but in the end she does play herself as the doe-eyed young girl onstage at the VMAs holding the moon man that night.

The video is also full of snake imagery, which Kim Kardashian branded Taylor with when she memorably “exposed” Taylor’s lies by playing a phone conversation between Swift and her hubby, in which Taylor gave her blessing for the mention of her on his controversial track, “Famous.”

Much of the video looks and feels like diet Beyoncé, with Taylor strutting and posing like the Queen Bey, but lacking any of the actual talent and dance skills to pull it off. But I’ll give her credit, the make-up artist and wardrobe designer put in work for this video. As for her most prominent female foe, Taylor dons a cat mask and wears a Tiger shirt (hello, “Roar”) as she smashes things with a bat. The sad thing is, Katy Perry has tapped out of this beef and softened her stance already by turning her “Swish Swish” Swift diss track into something pathetically toothless, so all of this fire from Taylor directed at Katy is wasted energy anyway. The end of the video finds the many versions of Taylor throughout her career justifying and mimicking many of the complaints people have about her celebrity persona, including the most prominent one about her always playing the victim or acting surprised.

Watch Taylor Swift pout, pose and snarl in her “Look What You Made Me Do” video below: