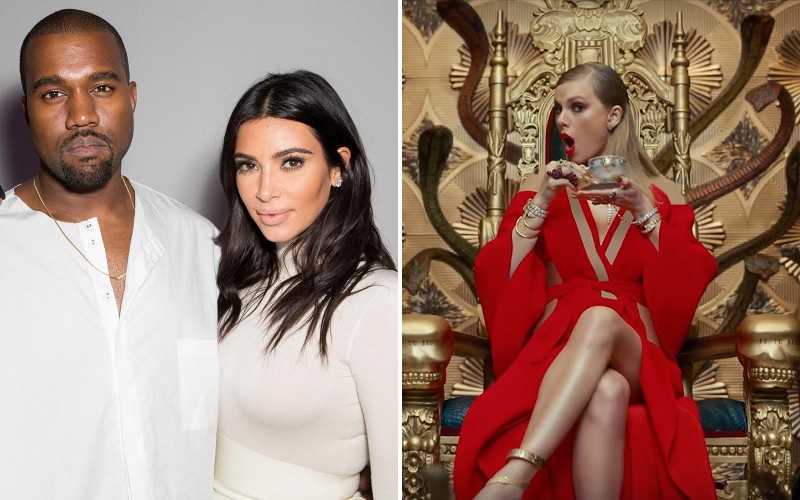 Even though Taylor Swift infamously claimed that she wanted to be “excluded from [the] narrative” that is her ongoing feud with Kanye West and Kim Kardashian, the singer did everything but exclude herself as the feud served as the entire concept of her latest video.

Swift debuted the music video for “Look What You Made Me Do” at the VMAs on Sunday night (Aug. 27) and the clip is full of shade and Kimye references.

Embracing Kim calling her a snake, Swift seemingly takes shots at Kim exposing her on Snapchat and stabbing her in the back, Kanye’s disastrous 2016 New York Fashion Week show with fainting models, and she even goes so low to mock Kim being robbed at gunpoint while being held in a bathtub.

"what are you doing?"
"Getting receipts, gonna edit this later."
Kanye's voice clip regarding famous that Kim edited#LWYMMD #LWYMMDvideo pic.twitter.com/fvHK5iD3Ty

Can we just point out the "tu brute" written on Taylor's throne and how Cesar said that when he was stabbed in the back #LWYMMD pic.twitter.com/NaTnQ5IFC5

@court_romero thinks this is a stab at Kanye's models all passing out at NYFW?? I hope she's right. #LWYMMD #LWYMMDvideo pic.twitter.com/yw2UFqmloO

But here’s the gag: Kim and Kanye actually did what Swift didn’t and removed themselves from the narrative. TMZ reports the couple isn’t tripping over Swift’s latest stunt of playing the victim. Via TMZ:

As for Kanye, our sources say there are certain feuds he deeply cares about … like the one in which he’s embroiled with Jay-Z and Tidal. As one well-connected source put it, “They’re like brothers who fight but feel bad about it and always end up coming together.” Taylor, on the other hand, isn’t even on his radar.

As for Kim, we’re told the way she sees it, the whole feud ended over a year ago.

Kim revealed in May that she hadn’t spoken to Swift since she exposed her as a liar last summer. If you recall, Kim defended her husband by releasing videos of Swift and Kanye positively discussing the rapper’s song “Famous” during a private phone call. However, publicly, Swift claimed she never told Kanye it was OK to reference her in the song.

I guess Taylor Swift really thought she was going to come out on top in this one-sided long-drawn-out feud. Unfortunately, she just comes off as petty and basically confirms Kim’s assertion the sweet, innocent pop/country princess is, in fact, a cold-blooded snake.

You can watch the full “Look What You Made Me Do” music video below: