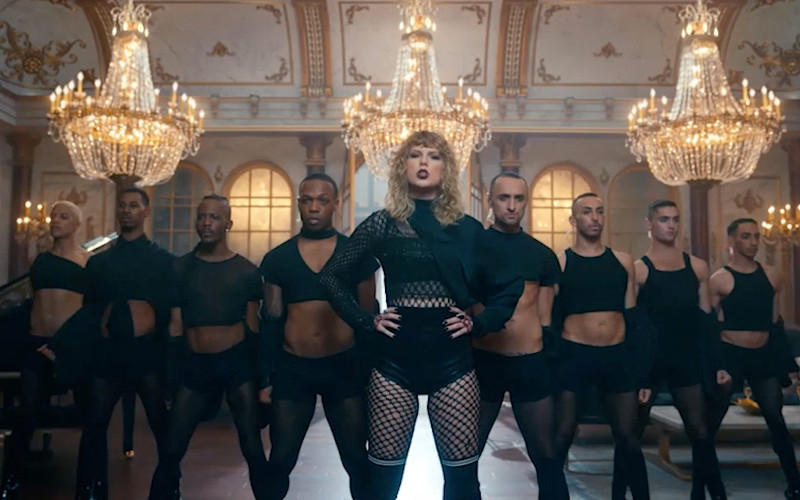 Taylor Swift is back. Well, at least some version of her is back. After Kim Kardashian and Kanye West exposed the backwoods snake as a liar and forced the singer to retreat from the public eye, Swift just dropped her newest single and she’s playing the victim. (Shocker!)

Late Thursday night (Aug. 24), Swift released “Look What You Made Me Do,” the first single from her upcoming album, Reputation. Embracing the “snake” characterization bestowed upon her by Kimye, Swift lyrically comes for her haters.

The song is darker and edgier than we’re used to seeing from the upbeat pop star. In fact, she even proclaims the old Taylor is dead towards the end of the track.

“LWYMMD” received mix reactions from both fans and haters (and it is pretty bad).

In addition to the new sound, Swift also debuted a new look. A teaser for the song’s music video was shown on Good Morning America Friday morning (Aug. 26).

Social media quickly noted similarities between the video’s visuals and Beyoncé’s “Formation,” especially since Reputation is supposed to be her “revenge album” like Bey’s Lemonade—which is already quite the stretch.

In any case, with the song and its video being subpar, the BeyHive got in formation with hilarious memes and commentary.

Umm @taylorswift13 sweetie, you're great & all & Imma let you finish but Beyoncé had the best Formation ever. https://t.co/YU30rjgfRb

When he fuck me good I take his ass to Cracker Barrel. pic.twitter.com/y4x1m2cDRD

It looks like this is going to be a Taylor Swift's "Lemonade". Pumpkin Spice. pic.twitter.com/ffXJOl8pQf

"Ok, what's the theme for this video?"

The full “Look What You Made Me Do” music video will premiere Sunday (Aug. 27) during the 2017 MTV VMAs, which will be hosted by Swift’s rival Katy Perry.

Though it’s probably an extremely unfortunate coincidence (although I wouldn’t put it past the little snake to stoop so low), Swift’s sixth album Reputation drops Nov. 10, which just so happens to be the 10th anniversary of the death of Kanye’s mother, Donda West.