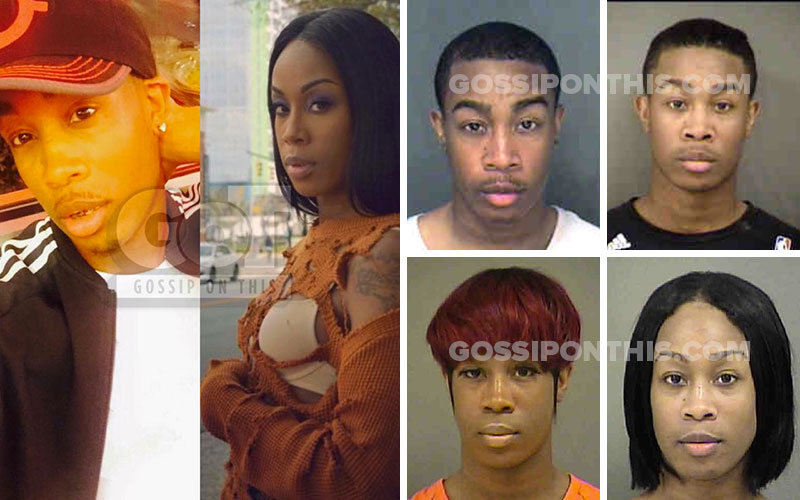 It’s been nearly a week since Bobby V was exposed by an alleged transgender prostitute for refusing to pay for her sexual services, and the R&B singer’s tryst is still the talk of the blogs and the internet. So much so that folks are looking for more information about “Reima Houston,” the transwoman involved in the scandal.

“Who is she?” and “What did she look like when she was a he?” are just some of the questions folks are asking, and we have the answers to those inquiries and more below.

Here are some things to know about “Reima Houston” (aka Aaron McCorkle):

“Reima Houston” is originally from North Carolina and was born “Aaron Glennell McCorkle.” According to public records (and Facebook), “Reima Houston” was born in February 1993 as a male named “Aaron Glennell McCorkle” and is originally from the Charlotte-Mecklenburg area of North Carolina.

Houston set the blogs and social media on fire last weekend when she sent out video footage to the blogs of her chasing Bobby V out of her apartment (or hotel room) and calling him by name for failing to remit payment after being “serviced.”

While the 40-second footage was grainy, and you couldn’t initially tell whether the man in the clip was indeed Bobby V (because he was covering his face), the R&B singer later admitted that it was him in the video, but he claimed that he was being extorted by the alleged prostitute and, on top of that, he didn’t know that the woman was trans.

SEE MORE: Bobby V Admits It Was Him in Transgender Prostitute Video, Claims He’s Being Extorted & Didn’t Know She Was Transgender

Now that we know who the transwoman is, we’re going to go out on a limb and assume that the “services” performed were oral in nature, because “Reima Houston” is a biological male who still has all of his … “equipment.” (Otherwise, Bobby V would have known for a fact that he was dealing with a transwoman.)

Aaron G. McCorkle attended Winston-Salem State University, where he studied broadcast journalism and made headlines after he was exposed as a cross-dresser. This ain’t Reima Houston/Aaron McCorkle’s first time at the rodeo, as far as making headlines is concerned. In fact, when Reima was living life as an out and proud gay man named Aaron McCorkle, he attended Winston-Salem State University as a broadcast journalism major. While there, he ran for Mr. Winston-Salem State University, but became embroiled in controversy after a campus DJ, who was an alumni, tweeted a photo of him in drag and said that he would quit “If y’all let a drag queen be Mr #WSSU.”

The photo eventually made its way to Media Take Out and local news station WXII 12 News reported on the incident. The DJ to eventually issued a public apology, which came the day of the Royal Court elections:

“I’d like to publicly express my sincerest apologies to Mr. WSSU Royal Court Candidate, Aaron McCorkle, his family, and his friends, for the offensive and unprofessional tweets that I publicly posted. I was wrong and I know my comments hurt not only Aaron, his family and friends, but others as well. I’d also like to apologize to the Winston Salem State University student body, staff and alumni, the entire LGBT community, and anyone else I offended with my offensive comments.

“I ask for forgiveness and hope that my statements do not affect Aaron’s candidacy for Mr. WSSU Royal Court, nor hinder anyone from their leadership pursuits, regardless of ethnicity, gender, or sexual orientation. I have personally reached out to Aaron to apologize, and he agreed to us having an in-person conversation soon.

“I sincerely wish him all the best in the Royal Court elections tonight.”

McCorkle has been arrested several times in Mecklenberg County, North Carolina and has accumulated a nice collection of mugshots. Aaron McCorkle has been arrested a number times in Mecklenberg County, NC for minor offenses such as unlawful concealment (May 2011), misdemeanor larceny under $50 (July 2012) and common law robbery (July 2013).

In mugshot photos taken between the years of 2011 and 2013, McCorkle was dressed as a man, but when he posed for a mugshot in May 2016 after violating probation and in November 2016 for assault, he was dressed as a woman.

Aaron McCorkle has been living as Reima Houston since October 2016. According to a Facebook post, in October 2016, Aaron McCorkle started officially living as a woman named Reima Houston.

“Nine months ago today I decided to stop hiding into the shadows and love myself first,” Houston shared in a post dated June 21st.

“I took the risk of the public eye and followed my happiness. I got rid of insecurities, heartaches, headaches, and sadness,” Houston continued. “I took a vow to never look back & to fulfill my destiny in the ways I knew was best for me. I blossomed into the flower that this rose bud always wanted to be and I did it because it was only rightfully so. Three more months until I’m a year in the game on hormonal therapy and taking it serious.” After the Bobby V video went viral, Reima Houston explained on Facebook why she sent the footage out.

In a message posted on Facebook, Reima explained why she put Bobby V on blast.

She also went on live for about three minutes and talked about the situation, hinting at having “proof” that he wasn’t extorting Bobby V as the R&B singer has claimed. Which is odd considering she used the word “extort” in her Facebook statement. She has since edited it to remove the word, but not before we took a screenshot: