GOSSIPONTHIS.COM TV Ray J, Safaree and A1 Compete in a Sperm Count Competition on... 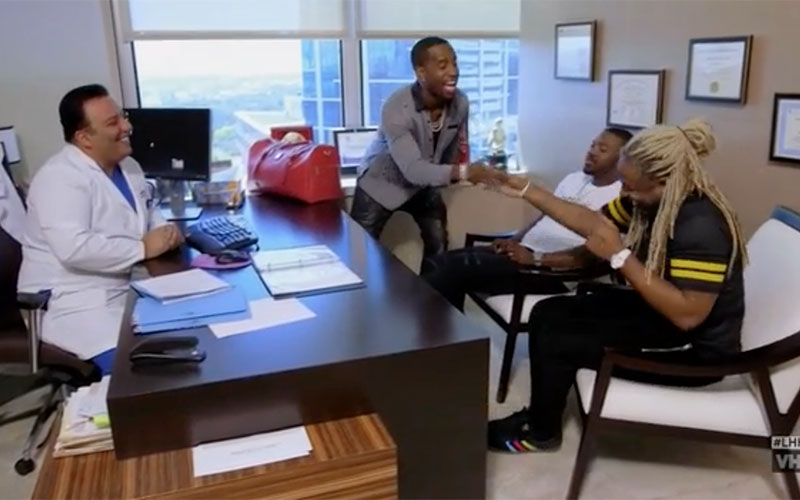 You know, every once in a while, I think Mona Scott-Young gets it into her head that she should use her considerable industry influence and platform as a force for good. I’m not sure who told her male infertility should be at the top of that do-better list, but somehow, someway, it made it there and the net result is an episode of Love & Hip Hop Hollywood in which Ray J confronts male infertility in the black community head on.

In the second episode of season 4 of LHHH, Ray J starts off on this masturbatory mystery by sharing that he and Princess have been attempting to get pregnant since they got married last season. Unfortunately, he hasn’t had any luck in successfully shooting Princess’ club up. So now, Ray J’s starting to wonder if there’s something wrong on his end of the operation. Over drinks and food with friends, Ray J decides that rather than just doing what most normal, grown men would do — i.e. book an appointment to see a fertility specialist by himself — that he’d be better off turning his semen analysis into a friendly, hands-on competition to determine who has the highest sperm count.

Safaree, who, let’s be honest, doesn’t have much else to do besides jack off these days since Nicki Minaj kicked him to the curb, is in for the competition. A1, the producer with the dramatic mama and mama-in-law situation last season, is also down to let loose his load to help Ray J’s cause. But the dick measuring contest over whose sperm count is the highest isn’t enough. To sweeten the pot, Ray J proposes that the loser with the lowest sperm count has to do a song with Hazel E. At the fertility clinic, we meet Safaree, who’s holding his choice of lube: his personal line of coconut oil. He’s smelling the coconut oil and you can hear R.Kelly’s “Seems Like You’re Ready” playing in his head as he prepares to choke his Jamaican jerk chicken in the name of fertility science.

Ray J attempts to diffuse the homoeroticism of this scene by saying that he doesn’t NORMALLY visit fertility clinics with his male friends, but you know, this time’s an exception or whatever.

For whatever good Mona and VH1 are doing by exposing the unwashed masses to fertility issues, they are simultaneously doing us harm by sprinkling it with Ray J’s toxic masculinity.

Lyrica acts like she doesn’t know where she is or why she’s there for the cameras, but I know she’s not that dumb and that the damn doctor had at least a few good signs above the receptionist’s desk and outside of the office before she stepped in. These scriptwriters for LHHH could’ve tried a little harder. Either way, Lyrica is down with helping her man release his sperm sample for this competition so she’s in.

Once the nurse or nurse assistant steps into the waiting room to let Ray J and his boys know that they’re ready, the race is on and everybody heads to their privation sperm donation chambers. After convincing two of his cast mates to rub one out for science, Ray J and his boys squad up and head over to the doctor’s office to see who among them is carrying the heaviest load.

The winner, in short order, is revealed to be….A1! He’s working with a sperm count of 75 million, which is VERY impressive considering 15 million is normal.

The first runner-up after A1 is Safaree, with a sperm count of 43 million. Nicki Minaj’s birth control was definitely working overtime with that kind of sperm count.

Last and actually very least, Meek Mill, I mean, Ray J was in 3rd place with a sperm count of 9 million. Apparently, Ray J has some lifestyle habits he needs to change (i.e. smoking weed, cigarettes and drinking) to see if he can revive his sperm count.

Given the results of the nut analysis, that means Ray J has to hit the studio with Hazel E. Whomp, whomp!

While this episode and subplot did some good in that it exposed the LHHH audience to an important men’s health issue, there is something cringeworthy about framing your sperm count as a “challenge,” as if any man has control over how much sperm he releases when he orgasms. It implies that infertility is in some way “his fault,” and that if a man has a lower sperm count, that he’s not a real man.

Like I said, Ray J and his toxic masculinity might not be the best advocates for men’s sexual health, but hey, this is better than watching Masika and her duck lips pout at the camera every time someone mentions Alexis Skyy’s name.