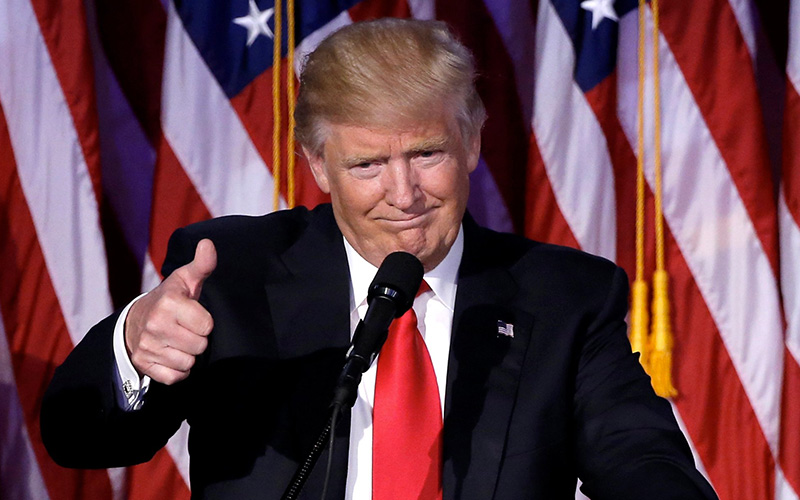 In today’s Donald Trump Is A Terrible Person news, the Commander-in-Cheeto has announced (via Twitter, of course) that transgender people will NOT be allowed to serve in the military from this point forward.

In a surprise announcement that will surely draw condemnation and ire from LGBTQ activists and the community as a whole, y’all’s president said that “the United States government will not accept or allow transgender individuals to serve in any capacity in the U.S. military.”

And why’s that, you ask? Well, allow Mango Mussolini to explain:

“Our military must be focused on decisive and overwhelming victory and cannot be burdened with the tremendous medical costs and disruption that transgender in the military would entail.”

See his tweets below:

After consultation with my Generals and military experts, please be advised that the United States Government will not accept or allow……

….Transgender individuals to serve in any capacity in the U.S. Military. Our military must be focused on decisive and overwhelming…..

….victory and cannot be burdened with the tremendous medical costs and disruption that transgender in the military would entail. Thank you

Trump’s ban comes just one year after the Pentagon (under the Obama administration) lifted a ban against transgender men and women serving in the military.

More via The Hill:

During the 2016 presidential race, Trump called himself a “real friend” of the LGBT community in the wake of the Orlando nightclub shooting and accused Democratic nominee Hillary Clinton of prioritizing “immigration policies that bring Islamic extremists” into the U.S.

“Thank you to the LGBT community! I will fight for you while Hillary brings in more people that will threaten your freedoms and beliefs,” he tweeted in June.

Thank you to the LGBT community! I will fight for you while Hillary brings in more people that will threaten your freedoms and beliefs.

He also criticized North Carolina’s controversial “bathroom law,” saying in an April 2016 interview that the state was “paying a big price” for the policy and that transgender individuals should use whatever bathroom they want.

Trump’s decision is a gesture to the conservative base at a time when he’s facing declining poll numbers and increasing pressure over the Russia investigation.

White House officials did not immediately respond to a request for explain the president’s decision-making process.

Under the policy set by then-Defense Secretary Ash Carter, transgender troops also receive coverage for any treatment deemed medically necessary by their doctors, including surgery and hormone therapy.

That step left a decision for Defense Secretary James Mattis to make on whether to allow new transgender troops to enter the military.

It wasn’t immediately clear what Trump’s announcement would mean for the approximately 250 transgender people now serving openly in the U.S. military.

A Pentagon spokesman referred all questions about Trump’s statements to the White House.

“We will continue to work closely with the White House to address the new guidance provided by the Commander-in-Chief on transgender individuals serving the military,” Navy Capt. Jeff Davis said. “We will provide revised guidance to the Department in the near future.”

Trump’s decision is a huge blow the LGBT community, which was just coming off a win after the surprising defeat of an amendment to the annual defense policy bill that would have banned Pentagon funding from being used for transition-related medical care.

But under the policy Carter crafted, transgender recruits weren’t allowed to enlist pending the end of a one-year implementation period.

That was supposed to end July 1. But the night before the change was to go into effect, Mattis issued a six-month delay in the policy to study the issue more.

In a memo explaining the delay, Mattis insisted that his decision does not “change policies and procedures currently in effect.”

Mattis also promised during his confirmation hearing that he wouldn’t reverse his predecessor’s decisions unless a service chief brings him hard evidence the policy is having a negative effect.

LGBT advocates were worried immediately after the election that Trump would roll back the transgender policy, which he has the power to do unilaterally since it is not a law.

They breathed a sigh of relief after Mattis’s confirmation hearing but have since been fighting on issues such as the enlistment policy and medical care.

Earlier this month, the House voted 209-214 against banning Pentagon funding from being used for transition-related care. Twenty-four Republicans joined with Democrats to defeat the amendment to the annual defense policy bill.

Mattis opposed the amendment, confirming he called its sponsor, Rep. Vicky Hartzler (R-Mo.), at least once on the issue.

But some Republicans hoped to have a second chance, filing several similar amendments to the spending bill coming to the House floor Wednesday.

The Rules Committee on Tuesday night decided on some of the amendments that will get a vote on the House floor. None of the transgender-related amendments made it in, but there will be a second chance on Wednesday.

Rep. Ileana Ros-Lehtinen (R-Fla.), whose son is transgender, immediately slammed the decision.
“No American, no matter their sexual orientation or gender identity, should be prohibited from honor + privilege of serving our nation #LGBT,” she tweeted.

Rep. Vicky Jo Hartzler (R-Mo.), meanwhile, said she was “pleased.””Pleased to hear that @realDonaldTrump shares my readiness and cost concerns, & will be changing this costly and damaging policy #readiness,” she tweeted.