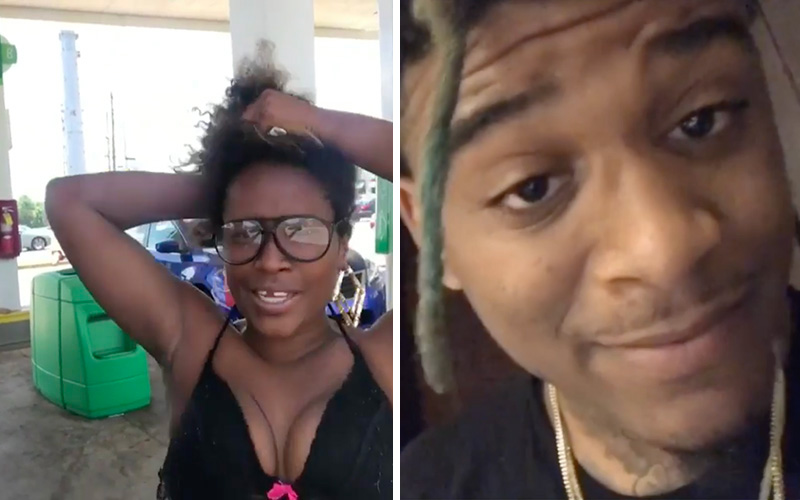 The man who shared that video of “In the House” actress Maia Campbell at a gas station in Atlanta Saturday (Jul. 8) with missing teeth, looking strung out and begging for crack has spoken out about the incident on Instagram.

The Internet as a whole was shocked and saddened to see the former child star in the state that she was in. Not only was she missing teeth and looking strung out, but she was also dressed in nothing but a bra and panties.

Campbell was also clearly out of her mind (or maybe she wasn’t?), talking about being raped by a guy who called himself Bill Cosby.

“This guy raped me, but he used a condom and his d**k was big… He said he was Bill Cosby,” she told the man in the video. Then she yelled, “I want some crack!” She then went into a story about a Persian stripper who “wanted to f**k me so bad, bruh.”

After the disturbing video footage went viral on blogs and social media, the guy in the video — a rapper based in Atlanta who calls himself “T Hood” and “One Dread” — caught a bunch of backlash online. He has since responded with a video on Instagram saying he doesn’t care what anyone thinks, and he’s not sorry for sharing it.

“F**k off my page with all that lame sh*t. Y’all n**gas would not be mad if I posted a white girl,” he said. “If I would’ve ran into Hillary Duff, Lizzie McGuire, and she was geeked up, and she was asking me for some crack, and she was out there trying to suck every n**ga d**k at the mothaf**kin gas station… for money… for crack… Y’all would not give a f**k.”

Fans of the 40-year-old actress have mentioned that she suffers from mental illness and in lieu of taking prescribed medicines from a doctor, she self-medicates with drugs like crack cocaine, something that even her mother, author Bebe Moore Campbell, knew about and wrote a book about before her death in 2006.

But, T Hood isn’t buying that argument in the least bit, and thanked those who shared the video while slamming those who didn’t like it. “This ain’t no mental disorder,” he said. “Shawty is just high as f**k… So please stay off my page with that sh*t. Salute to everybody who posted it. F**k you if you hating.” T Hood also shared a screenshot (above) of a DM he sent to rapper/actor LL Cool J, who saw the video and attempted to get contact information for Maia Campbell via Instagram. Apparently after getting the info he needs regarding Maia’s whereabouts, he posted an image of the words “Thank You.”

Now that all of this has been made public, hopefully LL Cool J can get in touch with her and she’ll actually listen to him, and possibly get cleaned up so that she can get back to work as an actress. It’s never too late to take back control of your life.

What are your thoughts on this? Do you think T Hood/One Dread was wrong for posting the video?