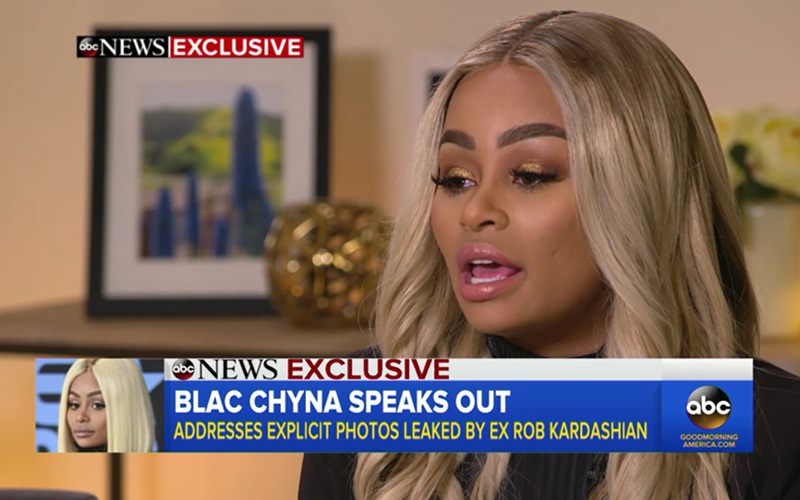 Prior to heading to court and being granted a restraining against Rob Kardashian, Blac Chyna sat down with ABC News to discuss the situation. Part of the interview aired on Good Morning America.

Chyna tells ABC News that she was “devastated” and “betrayed” after Rob Kardashian, her ex-fiancé and the father of her daughter, posted several nude photos of her on social media out if revenge.

“I was devastated, of course. I’m like, how could somebody, like, post these pictures of me? And I’m like, ‘Wow, okay. This is a person that I trusted. I confided. I felt comfortable, you know, with even sending these pictures and even talking to him about certain things, you know. I just felt … betrayed.”

Rob repeatedly posted the nude the photos and blasted Chyna on social media last week after she sent him a video of herself kissing another man. Chyna, who says she and Rob have been broken up since December, attempted to explain why she sent the video in the first place.

“If someone keeps poking at you … eventually you’re gonna pop. I thought that maybe if I send the video to him, he’ll leave me alone.”

Chyna also revealed that she reached out to Rob about posting the nude photos prior to seeking legal representation. Unfortunately, the conversation was unproductive.

“The moral of the story is he doesn’t respect me. [I told him], if you can’t respect me, you have to respect the law.”

Chyna also addressed the longstanding belief that she was only with Rob use the Kardashian name for fame and to get back at Kylie Jenner (Rob’s sister) for dating her ex and baby daddy, Tyga.

“I am Angela White. I am Blac Chyna … I was already Blac Chyna before the Kardashians,” she said emphatically.

“To all the women out there, you’re not the only one going through something. If one of us speaks up, hopefully it’ll be a domino effect.”

A judge granted Chyna a temporary restraining order against Rob after she claimed he had physically abused her in the past. Rob is ordered to stay 100 yards away from her, as well as refrain from posting photos, videos, or make personal statement about her online.