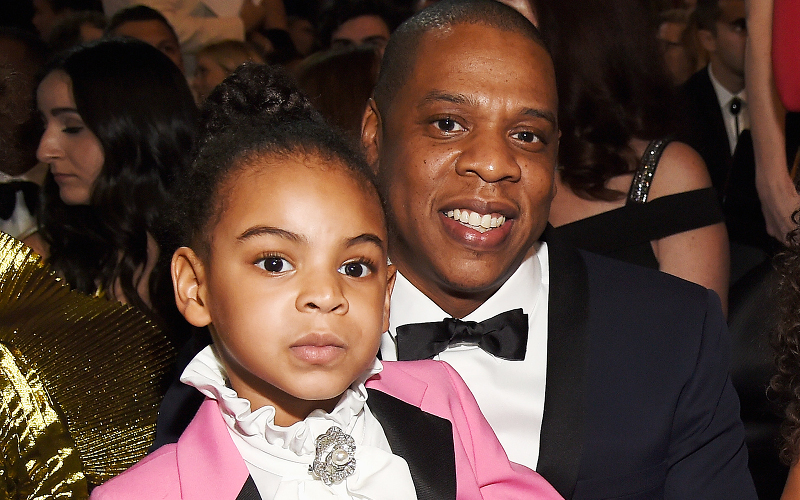 As we’ve watched her grow, it has become very clear that Blue Ivy is the perfect mix of her mother and father. Artistry and talent flows through her veins, and with “Blue’s Freestyle,” the 5-year-old proves she actually has the flow to back it up.

JAY-Z released the physical edition of his already-platinum album, 4:44 on Friday (Jul. 7). The physical version included three bonus tracks not included on the original TIDAL release: “Adnis,” “MaNyfaCedGod” with James Blake, and “Blue’s Freestyle / We Family.”

In “Blue’s Freestyle,” Jay and Beyonce’s daughter spits a few bars for 45 seconds. Though not every word is exactly decipherable, the little tike does go off!

“Everything, everything is my only single thing / Everything I hear is my answer…I never hear that / I be in the posse / Never seen a ceiling in my whole life.”

Get all the way into this Blue Ivy freestyle. Boomshakala pic.twitter.com/TLNLJdxKQF

Of course, Twitter went wild over Blue’s bars and praised the 5-year-old, catapulting her to the No. 1 trending topic.

Imagine Blue Ivy being the Queen of Rap that can serve you choreography like Bey in the next generation. I…- I feel this coming. pic.twitter.com/1e2RnQ0KUh

me trying to memorize blue ivy's rap but I don't even know what baby girl is sayin pic.twitter.com/6Ur1PO8FGo

Heard Blue Ivy's freestyle and had to fix the cover. pic.twitter.com/SY5LMBDObS

Real talk, I can understand Blue Ivy's freestyle more clearly than anything the Migos put out. #SorryNotSorry pic.twitter.com/w8eP5B5RNn

Blue Ivy's fan base has been dubbed the Ivy League. I love it. pic.twitter.com/95tAy3J98S

Blue Ivy needs to come out with a mixtape next year and Asahd needs to produce it. Bout to be LIT pic.twitter.com/3VV84YOIxV

Blue Ivy first appeared on one her parent’s songs shortly after her birth. Credited as B.I.C., the song “Glory,” includes her heartbeat and cries. The song debuted on two Billboard charts, making Blue Ivy the youngest person to ever chart.

She is also featured on “Blue” on Beyonce’s 2013 self-titled album.

So, should we really be expecting a Blue Ivy mixtape in the near feature? At the very least, this is a sign that the 5-year-old will be making more guest appearances on her parents’ albums.