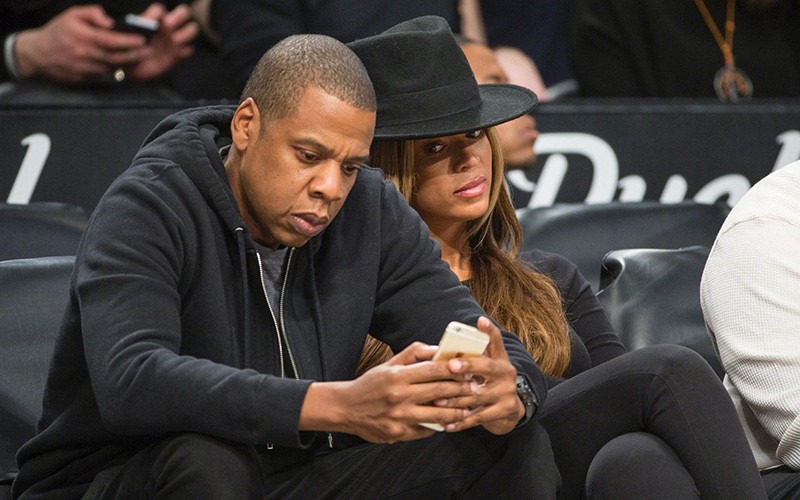 After a unique and somewhat confusing marketing campaign, JAY-Z dropped his 4:44 album on the world Thursday night/Friday morning, and social media can’t get enough of it.

The album touches on a number of things, including him confirming the infidelity Beyoncé exposed on Lemonade, that infamous elevator incident with Solange, his relationship with Kanye and much more.

RELATED: Eric Benét Claps Back at JAY-Z on Twitter for “4:44” Diss

From people praising the lyrical content to making jokes about how the album makes them feel while listening, Twitter is LIT with reactions and memes about Hov’s 13th studio album.

Check out some of our faves below:

The general consensus on Twitter: “Wait, so JAY-Z really did cheat on Beyoncé and Lemonade wasn’t just an album?!”

Everyone all surprised tonight like oh wow Lemonade was all true??? DaFuk did you think it was???

I always thought Lemonade was Bey mind fucking the industry but jay really admitted to cheating on 4:44.. this wasn't part of the plan pic.twitter.com/ntIlcpLH5X

Jay-z responded to Beyoncé Lemonade on 4:44. Takes the blame and takes shots at the haters. #JAYZ #JayZ444 pic.twitter.com/MGmHeEQgBp

Jay Z and Beyonce giving us Arnold Palmer…Lemonade and Tea

Lemonade and 4:44 are great PSAs in favor of therapy.

Now it makes sense why Solange beat up Jay Z in the elevator and Beyoncé didn't do nothing about it. #444 #JayZ444 pic.twitter.com/Tg6rHGWsvc

Remember the beyhive told me he didn't cheat and Lemonade was from a different perspective. Nah that nigga really cheated on y'all queen. pic.twitter.com/ZHfcXpdC0M

When you get so lost in #JAYZ444 that you forget who he's talking about for a second then realize… pic.twitter.com/OApI8OrTOJ

Bumping Jay-Z's album even tho he basically confirms he cheated on Bey. #444 pic.twitter.com/GutbfSlg7n

This just gives greater meaning to Lemonade. She really did capture her emotions/experience in the most authentic & artistic way possible. https://t.co/KCi5hJX8wv

#444album the beehive at Jay-Z after he admitted to cheating on Beyonce pic.twitter.com/weAPzFZBJi

“I apologize for all the stillborns, cuz I wasn’t present your body wouldn’t accept it…”

Folks thought Beyonce was lying in Lemonade and Jay confirmed it ALL. Lord….

Where are the ones who told me to shut my whore mouth bc Lemonade was "just a story"? pic.twitter.com/4yrEBAZBZQ

4:44 honestly made me love and appreciate Lemonade 1000% times more. pic.twitter.com/49sOV2qEeu

Jay z confirmed he cheated but he man'd up,took responsibility and got his woman back. ????? behind closed doors like it's supposed to be

Jay really said "you matured faster than me I wasn't ready" when Bey was 21 and he was at least 33. Niggas are awful.

Here lies the body of the love of my life who's heart I broke without a gun to my head. Mother of my children both living and dead…

This would be the perfect time for a joint tour.

OTR was so good. Just imagine the story that LEMONADE and 4:44 would tell collectively. pic.twitter.com/2O7y3nWRtG

Beyonce spilled her truth, jayz spilled his. Now it's time for a fire joint album. Let's all heal pic.twitter.com/ib0qqppCYH

Jigga even poked a little fun at himself:

"I be skipping leg day, I still run the world."

Jay is fed up with the leg jokes. pic.twitter.com/iBnrh3Ln8R

Bish. Jay-Z is throwing shots everywhere @ everyone. Even at himself #444 #JAYZ pic.twitter.com/AOMn896c8Q

And he was also really open about his relationship with his mother and her sexuality:

Jay said his mother is a lesbian and came out in support of her same-sex relationship. Rap really has grown up pic.twitter.com/3cYqgJrfM7

Some folks caught the shade JAY-Z was throwing at other rappers and celebs:

"…..in the future other niggas playing football wit ya son"

"in the Future other niggas playing football witcha son" pic.twitter.com/ybfigrcSL6

"Al Sharpton in the mirror taking selfies. How's him or Bill Cosby sposed to help me?" #444 #JayZ #Hov pic.twitter.com/VZwyzE2HRK

So basically when HOV said all those new rappers inspired him… he was inspired to shit on them… ??

And others were thankful for the gems he dropped:

Y'all who have been posting pictures holding money to your ear ?: #444album pic.twitter.com/rVnhunre1p

Me right now looking up stocks and investments I can afford after listening to the story of OJ by Jay z pic.twitter.com/BNtElU3olF

this album feel like ya OG pulled you to the side, sat you down, had a talk with you & told you get ya shit together young man

When Jay Z said "a loss ain't a loss it's a lesson, appreciate the pain it's a blessing" pic.twitter.com/VhrTH7IHUv

4:44 is a great reminder to never fall for these niggas.

While others simply praised the man for being the lyrical GOAT that he is:

I don't usually use this word when it comes to albums but 4:44 is an instant classic

Even other artists and celebs were giving Hov his props:

another masterpiece by JAY Z. these lyrics…powerful!!

Some of y'all forgot Jay Z know how to rap. Like, really well.

I hope y'all truly listening to what he's saying. Giving the game and blueprint once again for damn near free! This is a testimony.4:44 #Hov

Jay Z Just Reminded All Of Us How To Rap…. Rhythm And Poetry

When the G.O.A.T. makes a new album, you listen to the new album by the G.O.A.T. Still giving sick beats & rhymes. Catch the message. #444

So glad y'all finally get to hear the album, and make the faces we been makin' for months… #444 #jayz via @ebrojiapp pic.twitter.com/gTkeTXGHhd

"….I'll be damned if I drink some Belvedere while Puff got CÎROC?Y'all need to stop…" y'all catch that?

Meanwhile, some people are sad that they don’t have TIDAL and can’t enjoy the album like the rest of us:

Bruh Jay Z dropped an album and you need tidal to get it pic.twitter.com/lIGJ59VbjO

Me when Jay -Z 4:44 dropped and I don't have Tidal pic.twitter.com/3cEj8TRcda

Reading y'all Jay Z lyric tweets, tryna imagine how the songs sound, since I don't have tidal. pic.twitter.com/05yC7Dmac8

Me, an intellectual, watching y'all discuss 4:44 and refusing to download Tidal again pic.twitter.com/rCAMuwzfKd

When errybody talking bout Jay Z new album but you still waiting for the link pic.twitter.com/zueqBRtUZr

watching all the people who didn't already have tidal beg for someone to rip 4:44 pic.twitter.com/Zx1CFcFHvE