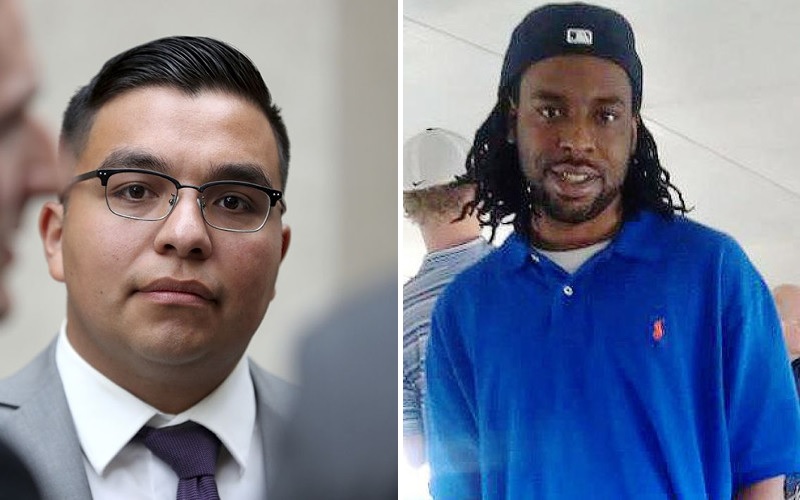 There will be no justice for the death of Philando Castile.

Minnesota officer Jeronimo Yanez was acquitted of all charges for shooting and killing Castile during a traffic stop last year, despite moments just after the shooting being live streamed on social media as Castile’s girlfriend calmly explained he had been cooperating prior to Yanez opening fire.

After 27 hours of total deliberation, a jury (10 white jurors, 2 black jurors) acquitted Yanez of second-degree manslaughter on Friday (Jun. 16). Castile was seated in the driver’s seat and allegedly reaching for his wallet when Yanez opened fire. Yanez testified he believed Castile was reaching for the gun he admitted to being licensed to carry.

Yanez was also acquitted of two felony counts of intentionally discharging a gun and endangering the lives of Castile’s girlfriend, Diamond Reynolds and her 4-year-old daughter, who were both in the car as Yanez fired 7 shots.

Philando’s mother, Valerie Castile, was understandably incensed by the verdict.

“The system continues to fail black people, and it will continue to fail you all… My son loved this city, and the city killed my son and the murderer gets away.”

"The system continues to fail black people," Castile's mother says. "And it will continue to fail you all." https://t.co/Okz2bwUl4f pic.twitter.com/TcYKATt4EZ

Yanez pulled over Castile in July 2016 for having a broken brake light. (He also thought the 32-year-old looked like a suspect in a recent robbery; Castile was later cleared as a suspect). According to Reynolds, Castile told the officer he had a licensed firearm in the car and attempted to hand over his license and proof of insurance.

However, within a minute of pulling Castile over, Yanez opened fired, later telling investigators the go-to excuse, “I thought I was gonna die.” He believed Castile was reaching for a gun, while Reynolds asserts he was reaching for his wallet.

Crying on the stand, Yanez reiterated his claim. He testified that he didn’t want to shoot Castile, but was “in fear for my life and my partner’s life.”

Interestingly, Yanez’s partner, Joseph Kauser, was not charged in the shooting because authorities concluded he never removed or even touched his gun during the incident. Why wasn’t he in fear of his life like Yanez, who clearly felt both of their lives were in danger?

However, Kauser did defend Yanez in court, testifying “I think he followed protocol.”

Castile’s shooting gained instant worldwide attention as Reynolds began recording on Facebook Live after Yanez has shot her boyfriend. His death sparked protests for several weeks and, needless to say, the verdict reignited the outrage expressed a year ago.

Rodney King got beat by police on VHS. #PhilandoCastile got Murdered by police in HD. 20 yrs later same flavor… nothin new under the sun.

A majority white jury couldn't find it unreasonable for officer to shoot a black man for reaching for his driver's license. #PhilandoCastile

At this point, what else is there to say? We’ve said all that we can about every non guilty verdict. #PhilandoCastile

Police should not be allowed to straight-up murder someone without any consequences. Sick.#PhilandoCastile

As noted by Samuel Sinyangwe (Campaign Zero co-founder/activist), 1,155 people were killed by police in 2016 alone. Only 13 cases lead to charges against an officer and there have been zero convictions, so far.

1,155 people killed by police in 2016
13 cases where officer was charged
ZERO convicted to datehttps://t.co/vqURbJHXRj #PhilandoCastile

Unfortunately, we’ve seen this before and each acquittal sets another legal precedent that police officers can kill black/brown people without fear of consequence. Though every “not guilty” makes it hard to see change ahead, with the memory of Philando Castile and everyone who came before, we have to remember to keep fighting for justice.