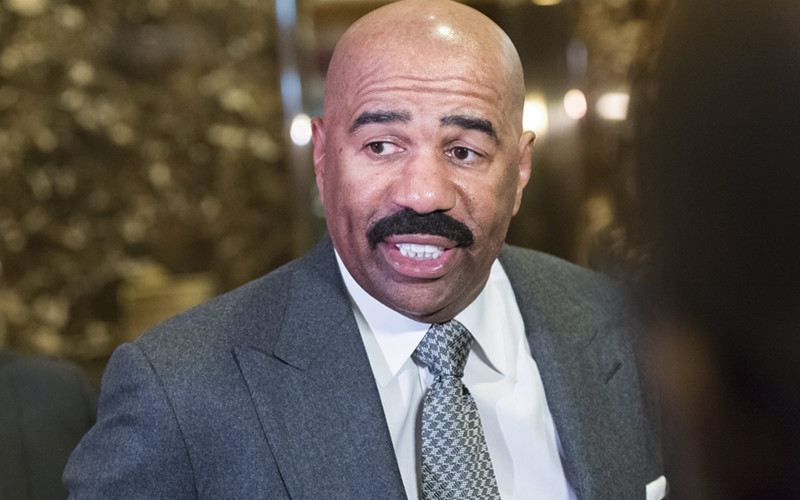 It’s been a bad few weeks for comedians and Steve Harvey is the latest one to put his foot in his mouth. During a recent broadcast of his morning radio show, the comedian made a horrible “joke” about the water crisis in Flint, Michigan.

On Tuesday (Jun. 13) Harvey, a Cleveland Cavaliers fan, was discussing his team’s loss to the Golden State Warriors in the NBA Finals. A caller from Flint commented that Cleveland didn’t “deserve jack.” This prompted the former Cleveland resident to unleash on the caller.

“You from Flint? … That’s why y’all ain’t even got clean water. When was the last time you touched water and it didn’t have lead in it?”

Harvey’s co-hosts were shocked by the comment and urged him to “reel it in.” Instead, he attempted to explain his “trash talking.”

“I wasn’t talking about the city of Flint, I was talking about him. … He going to call in, say Cleveland don’t deserve jack, and he over there bathing in all that silver water.”

He then proceeded to make one more dig at the Flint resident before he hung up, which one of his co-hosts immediately apologized for on behalf of the show and Harvey.

“One more thing. … Enjoy your nice brown glass of water.”

Harvey, who dedicated an entire episode of his daytime talk show to the Flint Water Crisis last year, received heavy backlash for his comment on social media. Flint mayor Karen Weaver even sent a letter to the comedian urging him to apologize for making light of an ongoing crisis that has already claimed 12 lives and has been linked to an outbreak of Legionnaires’ disease.

Nine-year-old Amariyanna “Mari” Copeny, also known as “Little Miss Flint,” posted a response video asking him to apologize and challenging him to actually visit Flint to fully understand the seriousness of the situation.

Copeny appeared on Harvey’s show last year to discuss the crisis. She also wrote a letter to President Barack Obama, which prompted him to visit the Michigan city.

Harvey issued a statement regarding his insensitive comments. He reduced his joke to “trash talking about sports” and reiterated the joke was not aimed at the entire city of Flint, just the Flint resident caller.

“This morning callers and I were cracking jokes about the Cleveland Cavaliers loss to the Golden State Warriors. I’m a huge Cavs fan.

The caller and I were talking trash about our teams and cities. ‘SIMPLY TRASH TALKING ABOUT SPORTS’.

I made a joke directed at him, as he is from Flint, a city for which I have great affection and respect. So much so that I devoted a full hour on my daytime talk show to raising awareness for the Flint water crisis.

I also pressed then candidate, Hilary Clinton, to offer solutions to what I called one of the great catastrophes of modern times.

The caller laughed as my joke was taken in the context it was offered.

Any attempts to craft this into anything more serves no one.” -Steve Harvey

The statement is definitely not the apology Mayor Weaver and Little Miss Flint was hoping for. In fact, he defends the joke without even giving the half-ass “I’m sorry you were offended” apology. Maybe he’ll accept Copeny’s challenge and visit Flint and offer some help.