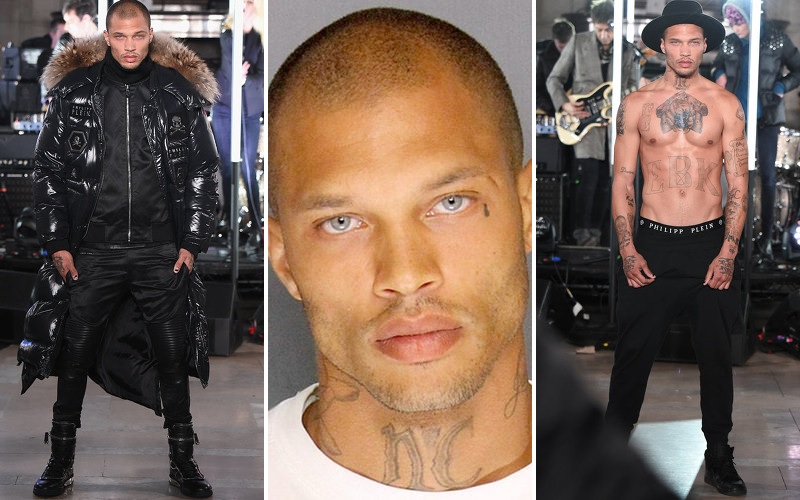 Prison Bae is really out here making it happen. Jeremy Meeks, the man whose sexy mugshot went viral and had everybody and their mama getting hot and bothered in 2014, just made his runway debut – at New York Fashion Week!

The “hot felon” made his runway debut by walking in the Philipp Plein show on Monday (Feb. 13); he even opened the show. Meeks wore an all-black ensemble as he brought his prison-swag to high fashion. Plein is a German designer who is expanding to the American market and was also making his NYFW debut. His show was one of the most highly-anticipated of the bi-annual event and was attended by celebs like Madonna, Kylie Jenner, Tyga, Fat Joe, Paris Hilton, and Tiffany Trump.

Though Meeks was covered up on the runway, he showed a lot more skin backstage. The 33-year-old posed shirtless for several photos with his sweatpants low enough to show off his Philipp Plein boxers. Meeks became an internet sensation in 2014 for his model good looks after Stockton Police Department posted his mugshot on its Facebook page. He served two years in prison for gun possession and was released in March 2016. However, one year before his release, he signed a modeling contract with White Cross Management. Whatever your thoughts are of prison bae, it’s nice that the husband and father of three is able to have this positive experience. You can also follow his modeling journey via his Instagram account.

The only drawback to Meeks’ runway debut is that, unfortunately for Plein, Meeks is getting more attention that the designer’s collection.