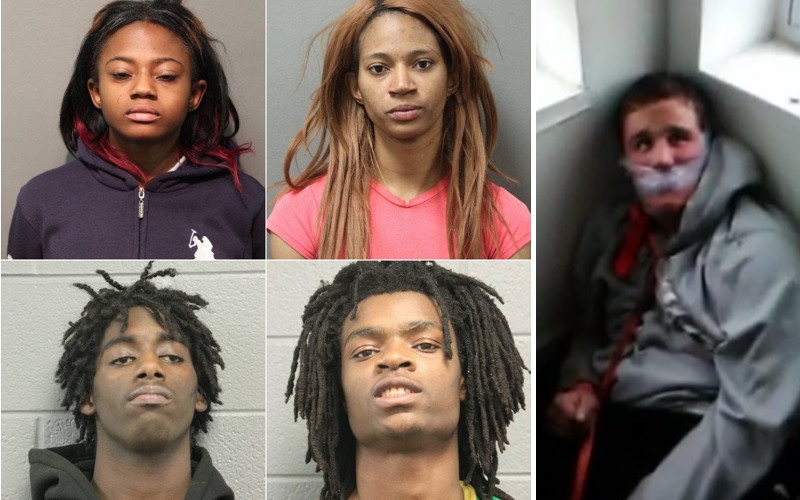 Four suspects have been charged with kidnapping and hate crimes in Chicago after torturing a special-needs teen for hours and broadcasting it during a Facebook Live session.

Jordan Hill (18), Tesfaye Cooper (18), Brittany Covington (18), and Tanisha Covington (24) have each been charged with felony kidnapping, unlawful restraint, aggravated battery with a deadly weapon, and a hate crime after taking an 18-year-old hostage, tying him up and torturing him.

Hill and Brittany also face burglary charges, while Hill was also charged with possession of a stolen vehicle.

The story has disgusted the entire nation as the 30-minute video of the 18-year-old victim being tortured went viral Wednesday night (Jan. 4).

In the video, the attackers can be seen kicking, punching, and beating the special needs teen, even taking a knife and cutting his scalp. They also took the knife to rip his sweatshirt.

The attackers can be heard saying “F*ck Donald Trump” and “F*ck white people,” even forcing the 18-year-old to repeat the statements.

One video shows them forcing the victim to drink from a toilet.

The Chicago Police Department says the victim was tortured for nearly 5 hours. While the viral Facebook broadcast (which has since been taken down by Facebook) only lasted 30-minutes, police say they have more videos.

Conservative conspiratorial website Infowars.com attempted to link the crime to the Black Lives Matter movement, which caused #BLMKidnapping to trend on Twitter. However, police have refuted this claim and also don’t believe the victim was targeted due to his race.

CPD actually believes the suspects targeted the teen because of his diminished mental capacity, which constitutes a hate crime under Chicago law.

It goes without saying that the actions being branded by the far-right as the "BLM Kidnapping" have nothing to do w/ the movement.

The victim was able to escape his captors after someone in the neighboring apartment he was being held in complained about the noise and called the police. Police found him wandering on the street. He was treated for his injuries and will recover at his parents’ home.

David Boyd, the victim’s brother-in-law, released a statement on behalf the family:

“We’re so grateful for all the prayers and efforts that led to the safe return of our brother. We’re fully aware of the charges being brought against the offenders. At this time, we ask for continued prayers for all those involved, for our family’s privacy as we cope and heal.”

According to the victim’s parents, they last saw their son Saturday (Dec. 31) after dropping him off at a McDonald’s to meet their son’s eventual kidnapper/torturer Jordan Hill; the two were high school friends. The parents reported the 18-year-old missing Monday (Jan 2.) after not hearing from him for a few days.

CPD reports Hill picked the special needs teen up in a stolen van and held him captive for several days, even sleeping in the van, before taking him to the Covington sisters’ apartment. CPD says a “play fight” escalated that led to the torture.

“What we have seen as surfacing, I think, are a lot of problems that have been there a long time. Whether it’s tensions between police and communities, hate crimes of the despicable sort that has just now recently surfaced on Facebook. The good news is that the next generation that’s coming behind us … have smarter, better, more thoughtful attitudes about race.”

Facebook pulled the original video stating, “We do not allow people to celebrate or glorify crimes.” However, the site says copies of such content may be reposted in order for users to “condemn violence or raise awareness.”

Clips and/or the full 30-minute video of the Chicago teen torture can be found on Twitter and YouTube. However, such clips may only last a short period of time before being pulled as well.