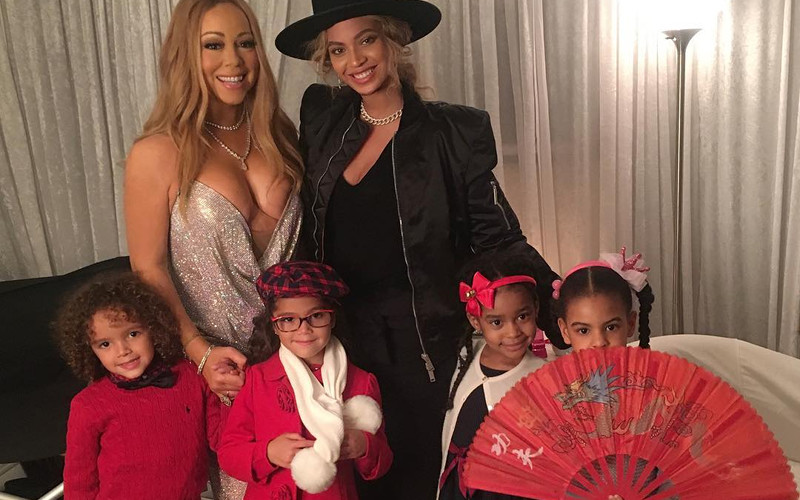 One of the greatest, cutest things in the entire world occurred earlier this week! Although, we weren’t present to witness it in person (and honestly, I don’t even think we’re worthy), there is photographic proof that it, indeed, happened.

Blue Ivy Carter and Moroccan & Monroe Cannon met/posed for a picture! And their famous mothers joined in the pic!

Another beautiful young girl is also in the picture. However, no one seems to know who she is. Blue Ivy’s BFF perhaps? Regardless, I’d like to call her the luckiest person in the world! Could you imagine being in the presence of such greatness? It’s almost like standing next to royalty and their heirs.

Once you get over the fact that Mariah and Beyoncé are in one photo with their kids, you also start realize that Blue Ivy and her fan might actually be the star of the photo.

Blue Ivy with that fan wins photography posing forever. Everyone else can go to bed. pic.twitter.com/9yRgwMSDgX

All the other children said cheese. Blue Ivy got a geisha fan and a smize. I just…

Blue ivy is ICONIC! That pose with that fan….

I strive to be as extra as Blue Ivy with this fan. pic.twitter.com/nnBfPp8hpj

Mariah previously posted a photo of she and Beyonce backstage at the concert without the kids.

She clearly knew we had to prepare ourselves for the full experience. Along with “All I Want for Christmas,” I’m guessing these photos are Mariah’s Christmas presents to us and all I have to say is “thank you!”