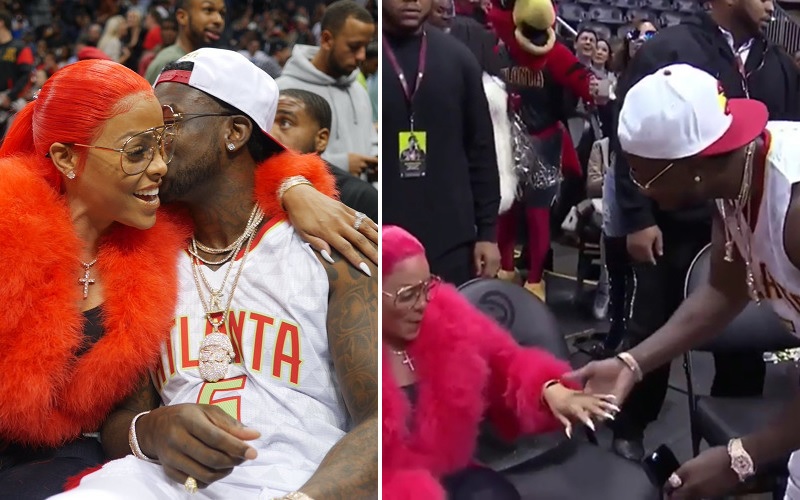 Gucci Mane is having the best few weeks of his life. Not only is the Atlanta rapper celebrating his first No. 1 song, he just got engaged!

Tuesday night (Nov. 22), Gucci Mane sat courtside at the Atlanta Hawks game with longtime girlfriend, model Keyshia Ka’oir. Although his team lost to the New Orleans Pelicans, Gucci was the winner. While being featured on the “Kiss Cam” during a break, Gucci pulled out a ring and popped the question!

Keyshia was genuinely surprised but, of course she said yes. The two began dating in 2010 after Gucci requested she appear in one of his music videos, and she’s been holding him down ever since, even as he spent nearly 3 years in jail.

“We had our ups and downs, ’cause I would mess up and do stupid junk, but she had my back through all of it,” the rapper told The New York Times earlier in this year.

Keyshia did not waste any time showing of her new bling. And why would she? The rock is huge. Gucci did real good on that one!

The night definitely belonged to Gucci Mane. In addition to getting engaged, he also performed “Black Beatles” during halftime.

The song is currently No. 1 on the Billboard charts for the second consecutive week after it launched the viral “Mannequin Challenge” sensation. The rapper even got the crowd to participate as he performed his No. 1 hit.

A big congrats to @gucci1017 and @KeyshiaKaoir on their engagement! pic.twitter.com/xLi5hJckGB